Facebook on June 4, 2021 banned former US president Donald Trump for two years, saying he deserved the maximum punishment for violating its rules over a deadly attack by his supporters on the US Capitol (AFP / Olivier Douliery)

Posts on social media claim Donald Trump has been permitted to once again use the Facebook and Instagram accounts he relied on when US president. This is false; the company announced on June 4, 2021 that Trump is subject to at least a two-year ban from both platforms.

Trump, loser to Democrat Joe Biden in the 2020 presidential election, was blocked from using the accounts hours after his January 6, 2021, speech to supporters in Washington, when he claimed victory had been stolen from him in nationwide voting two months earlier.

Five people would eventually die in violent clashes between Trump supporters and law enforcement in and around the US Capitol, where lawmakers had been certifying Biden’s victory.

Despite the violence on January 6, Trump posted a video on Facebook and Instagram at 4:21pm EST, addressing his supporters and again disputing the election result.

He said: “I know your pain. I know you’re hurt. We had an election that was stolen from us. It was a landslide election, and everyone knows it, especially the other side, but you have to go home now.

“We have to have peace. We have to have law and order. We have to respect our great people in law and order. We don’t want anybody hurt. It’s a very tough period of time. There’s never been a time like this, where such a thing happened, where they could take it away from all of us – from me, from you, from our country. This was a fraudulent election, but we can’t play into the hands of these people. We have to have peace. So go home. We love you. You’re very special. You’ve seen what happens. You see the way others are treated that are so bad and so evil. I know how you feel. But go home and go home in peace.”

Some 28 minutes later in a written Facebook post, Trump repeated his claim that he won the election: “These are the things and events that happen when a sacred landslide election victory is so unceremoniously viciously stripped away from great patriots who have been badly, unfairly treated for so long. Go home with love in peace. Remember this day forever!”

Facebook, which bought Instagram in 2012, removed the initial video 80 minutes after Trump posted it, saying the message had violated the platform’s “Community Standard on dangerous individuals and organizations.”

Facebook also removed Trump’s written statement -- just eight minutes after he posted it -- and imposed a 24-hour block on the then president’s accounts.

The company announced on January 7 that the ban would be for an indefinite period. Trump was also permanently banned from Twitter.

Biden was sworn into office 13 days later and Trump left Washington, bound for his Mar-a-Lago resort in Palm Beach, Florida.

However, Trump’s exit from the White House has not prevented false claims that he can still use his Facebook and Instagram accounts.

Such claims resurfaced on June 2, two days before Facebook ultimately updated its ban on the former president. 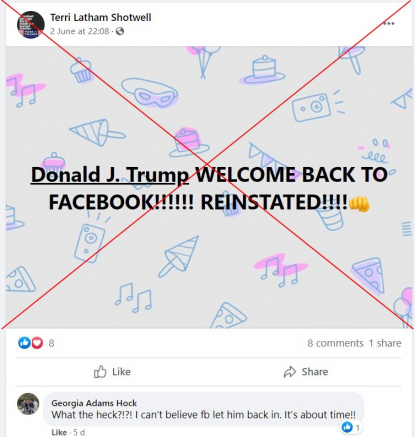 And this June 3 post on Facebook falsely says Trump has been allowed back, and speculates about a political comeback. 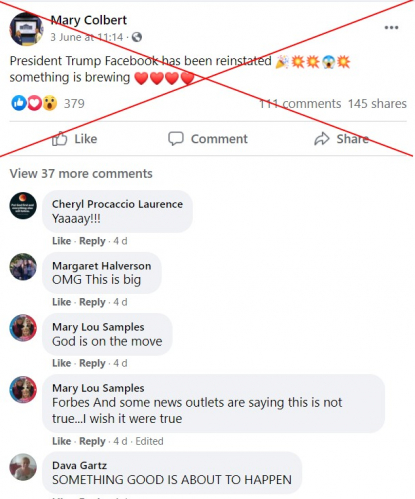 However, no return was ever allowed. Facebook’s June 4 announcement of the two-year ban is effective from the date of the Capitol unrest, meaning until at least January 2023.

Facebook said the ban would be re-assessed around that time but signalled Trump would only be reinstated if conditions permit, noting the defeated Republican candidate’s “actions constituted a severe violation of our rules which merit the highest penalty available.”