Post does not depict Palestinian violence against queer community

An Instagram post showing an image of a man being thrown off a roof suggests this is how Palestinians treat the queer community in the Palestinian territories. But the photo was taken in Homs, Syria and the crime was committed by a member of the Islamic State jihadist group, anti-extremism researchers told AFP.

“Queers for Palestine … Palestine for Queers,” a May 18, 2021 Instagram post reads, contrasting the queer community’s support for Palestinians with the purported treatment of LGBTQ people in their territories. 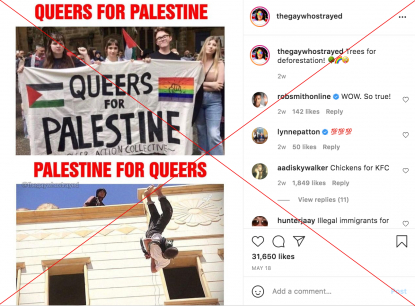 The images spread around the time a ceasefire was announced in May, 2021 between Israel and the Palestinian Islamist group Hamas, which rules the Gaza Strip. Rockets and other fire from Gaza militants had killed 12 people in Israel, while retaliatory air and artillery strikes from the Jewish state left 254 Palestinians dead.

Through a reverse image search on Google, AFP found the origins of both photos used in the post, confirming that the comparison made is inaccurate.

The top image was originally from a May 2018 post, published on a Facebook page for the queer action collective of the University of Sydney, in Australia.

The bottom part of the post shows a photo of a man, hands tied, falling head first off the top of a building, while another man looks down on him from the roof.

A reverse image search found an identical match to this image, which was used in a Daily Mail report from August 2015 with the headline: “Horrific moment two gay men are thrown off tall building by ISIS then stoned by baying mob including children.”

According to the article, the image is from a video taken in Homs, Syria.

Researchers at the Counter Extremism Project, a non-profit international group working to combat the threat from extremist ideologies, confirmed the context of the video to AFP.

It was taken in Homs province, and released by ISIS member Wilayat Homs on August 13, 2015, with the title: “But Who is Better Than God in Judgement.”

According to the researchers, the description of the video reads as follows: “Execution of two men identified as “people of Lot,” (referring to gay men) by ISIS. ISIS proclaims that two men thrown from the building’s roof are to be executed for being gay. After both men are thrown from the building, they are pelted with stones, and their bodies are then washed, wrapped in a shroud, and buried.”

The SITE Intelligence Group, which tracks extremist threats, also confirmed the origin of the video to AFP, providing a link to its website that contains the photo.

In September 2015, AFP wrote about similar killings of men accused of being gay by jihadists in central and northern Syria.

Rasha Younes, a researcher at Human Rights Watch specializing in LGBTQ rights, explained to AFP: “During the Syrian conflict, gay and bisexual men, transgender women, and nonbinary people were targeted for sexual violence for being perceived as ‘soft’, and subjected to abuses ranging from being harassed and sexually abused at checkpoints, detained, tortured, and subject to rape, genital violence, forced nudity, and sexual harassment.”

According to a 2020 report by the International Lesbian, Gay, Bisexual, Trans and Intersex Association (ILGA), same-sex sexual acts in Syria are illegal, while in the Palestinian territories the situation is more complex. They are legal in the West Bank but remain outlawed in Gaza.

The Islamic State group (IS, also known by the ISIS acronym), overran large parts of Syria and Iraq and proclaimed a cross-border “caliphate” in 2014, imposing a puritanical version of Islam. Military campaigns in both countries led the group to lose the final slice of its territory in March 2019 but remnants of the group still carry out attacks.