Facebook posts shared thousands of times claim American singer R. Kelly was released from prison in June 2021. This is false; prison records and Kelly’s lawyer say he remains behind bars awaiting trial on sex-related charges, and the posts use a two-year-old picture of Kelly leaving a detention center.

“R Kelly out,” reads the caption of a June 3, 2021 Facebook post with an image of the singer being escorted from jail by a man in a black coat. The post has been shared more than 15,000 times. 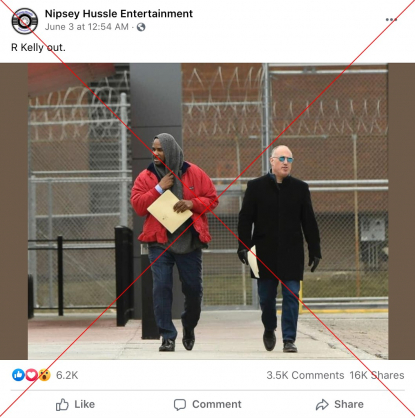 The artist born Robert Sylvester Kelly faces federal charges in Chicago and Brooklyn, New York, and other charges in Cook County, Illinois and Hennepin County, Minnesota. Trials have been delayed multiple times due to the Covid-19 pandemic.

The federal case in Chicago alleges he filmed himself having sex with minors and obstructed justice, while the Brooklyn case alleges sexual exploitation and racketeering.

Kelly, 54, attained superstar status with hits including “I Believe I Can Fly” and “Ignition.”

At the time of publication of this article, the US Federal Bureau of Prisons inmate database said that Kelly is incarcerated at Metropolitan Correctional Center in Chicago, Illinois. 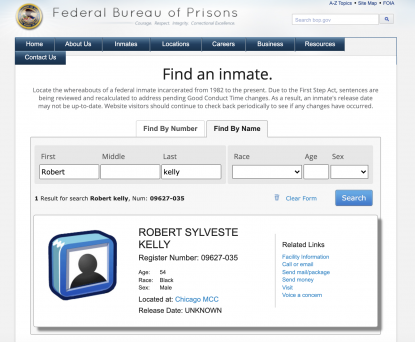 Screenshot of the US Federal Bureau of Prisons website, taken on June 8, 2021

The singer’s trial in New York is scheduled for August, Greenberg added, before asking the court there to withdraw from the case.

A Google reverse image search of the picture accompanying the claims on social media yields this August 2020 article, which identifies the man next to Kelly as Greenberg, and this Associated Press (AP) footage of the scene dated March 9, 2019.

A side-by-side of a Facebook post image (left) and a screenshot taken on June 8, 2021 of Associated Press video footage (right), showing that the images portray the same event

The clip shows Kelly walking out of a Chicago jail in March 2019 after someone paid $161,633 that the R&B singer owed in child support, the AP article said.

Kelly could face decades in prison if he is convicted in the cases against him. He has pleaded not guilty to all charges.