An image shared hundreds of times on Facebook purports to show prominent US Democratic Representatives, including Ilhan Omar and Alexandria Ocasio-Cortez, wearing outfits emblazoned with swastikas. The image, however, has been doctored from a photo which shows the politicians wearing outfits that do not display swastikas.

The image was posted here on Facebook on January 30, 2021. It was shared by a New Zealand-based Facebook page with more than 4,000 followers. 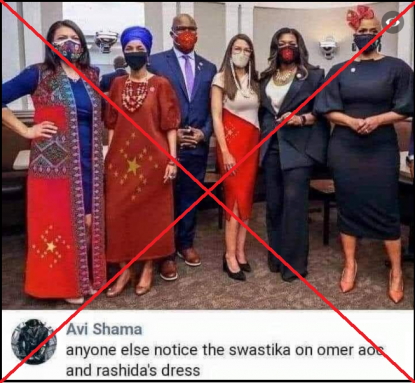 A screenshot of the image posted to Facebook, taken February 15, 2021.

“There you have it folks! A group of communist nazis,” the caption reads.

The image purports to show Ocasio-Cortez, Omar and Tlaib wearing red garments featuring a yellow swastika with a star. Bowman and Bush are pictured sporting facemasks with the same swastika symbol, while Presley appears to be sporting a red bow featuring the symbol.

The image includes text from another Facebook post that reads: “Anyone else notice the swastika on omer aoc [sic] and rashida’s dress”.

The image was shared hundreds of times after being posted by multiple Facebook pages in the US, including here, here and here.

The image, however, has been altered.

A reverse image search shows the image was originally tweeted by Cori Bush on January 3, 2021.

Ocasio-Cortez, Omar and Tlaib are also not pictured wearing red dresses, as shown in the doctored image.

The original image posted to twitter by Cori Bush (left) and the altered image (right).

Bush’s “Squad up” caption is a reference to the four women of colour: Oasio-Cortez; Omar; Tlaib and Pressley, who are known for their progressive policy stances, according to the HuffPost.

The image marked the addition of the newly elected Democratic Representatives, Bush and Bowen, as part of a group of progressive lawmakers, according to a report from US news and politics website The Hill.

Other members of "The Squad" retweeted the photo with their own captions. You can see posts from Bowman here; Ocasio-Cortez here; Omar here; Tlaib here; and Presley here.