Reports by some Nigerian media have claimed that bank charges have been reduced for customers following a purported review of the fee structure stipulated by the country’s central bank. However, the claim is false: fees remain unchanged from 2019 when the regulator last updated guidelines on bank charges amid calls to review excessive fees imposed on customers by local commercial banks. Last month, the central bank republished the same set of guidelines from 2019 on its website, which some media outlets wrongly assumed to be new and updated.

One Nigerian newspaper, the Daily Independent, claimed in a news report that the Central Bank of Nigeria (CBN) had removed maintenance charges on Automated Teller Machine (ATM) cards.

The report was published on January 28, 2022, a day after the CBN republished its 2019 guide on bank charges in Nigeria. The guidelines released back in December 2019 were implemented in January 2020. “JUST IN: CBN Removes ATM Maintenance Fee, Cuts Bank Charges, Others,” reads the newspaper’s headline. The news report has been viewed more than 15,000 times, according to the page counter on the website.

The same text has been widely circulated on major social networks, too, including a Facebook page called “Buharist Reporters” with nearly 250,000 followers. AFP Fact Check has repeatedly debunked posts on the page, which openly supports President Muhammadu Buhari. 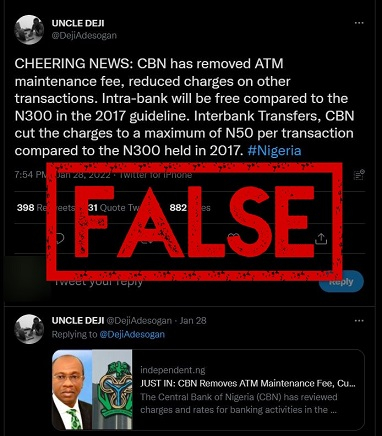 Other reports claimed that the CBN went even further by reducing a range of other banking fees in 2022.

“CBN slashes ATM withdrawal, inter-bank transfer charges,” reads the headline of a news report on the website of daily newspaper The Guardian.

Some pro-government social media accounts also latched onto the reports.

“The CBN reduces ATM withdrawal charges and inter-bank transfer fees, withdrawals on ATMs now reduced from N65 to N35 after the third withdrawal within the same month, while inter bank transfers to [a] maximum of N50 per transaction from N300,” reads a tweet by Bashir Ahmad, the personal aide to President Buhari.

However, the claims made in the media are false — there has been no change to the central bank’s guidelines on service or other charges since the last review was done in 2019.

Both headlines in the Daily Independent and The Guardian give the impression that bank charges have again changed in Nigeria, in line with the expectation of bank customers who have long raised concerns over excessive costs.

In 2018, Nigerians had protested under the  Twitter hashtag #Reform9jabanks to call for a review of several bank-associated costs, including a then-monthly maintenance fee of 50 naira on local ATM debit cards. They also accused commercial banks of profiting from the charges.

I was robbed and fidelity bank kept charging me for card maintenance for months until I went to block the card #Reform9jaBankshttps://t.co/tVCZNJkB9l

After Nigerian lawmakers weighed in on the matter following the outcry, the central bank reviewed its policy in 2019. Third-party ATM withdrawal charges were reduced, for example, while the cost of interbank transfers was slashed to a maximum of 50 naira per transaction from 300 naira.

In addition, the CBN removed card maintenance fees on current accounts and reduced the charges on cards linked to savings accounts to 50 naira a quarter from 50 naira a month.

The maintenance fee is the amount each bank cardholder pays to cover the cost of procuring and maintaining ATMs.

AFP Fact Check compared the central bank’s guidelines for bank charges published in 2019 and 2022, and found them to be the same. The 2019 guidelines represent the last update, replacing previous versions in 2017 and 2013 as well as the first edition from 2004.

In the CBN’s bank charges guide from 2017, the maintenance fee for debit cards was 100 naira a month.

In the 2019 guidelines, the CBN removed the debit card maintenance charges for the two categories of customers, except for cards linked to savings accounts. 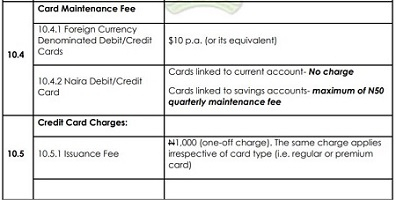 This remains the status quo.

Asked to comment, CBN spokesperson Osita Nwanisobi said only that “what you see on our website is what you should believe”.

AFP Fact Check can therefore confirm that the guidelines published in 2019 were simply republished unchanged by the central bank in January 2022.