5G networks do not cause 'flu-like' symptoms

Social media posts claim radiation from 5G technology makes people sick with flu-like symptoms. But US health authorities and independent experts say there is no evidence that wireless communication systems are harmful to humans. 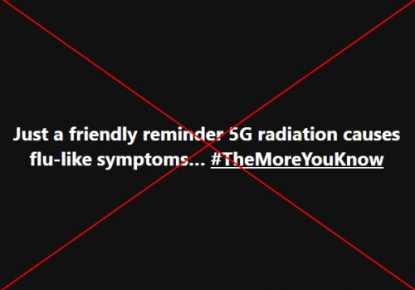 Similar claims appeared on Facebook here, in a video here and in an online article here.

The posts come as telecommunications companies roll out fifth-generation wireless technology across the United States and as the country contends with Covid-19, which can cause similar symptoms as the flu.

5G, the next generation of super-fast mobile network technology that will power self-driving cars, smart-home technology, streaming and other services, uses higher-frequency waves than previous generations.

"To date, there is no consistent or credible scientific evidence of health problems caused by the exposure to radio frequency energy emitted by cell phones," the US Food and Drug Administration says on a webpage titled "Scientific Evidence for Cell Phone Safety."

There are "no new implications for 5G," and "while many of the specifics of 5G remain ill-defined, it is known that 5G cell phones will use frequencies covered by the current FCC exposure guidelines (300 kHz-100 GHz), and the conclusions reached based on the current body of scientific evidence covers these frequencies," it adds.

The agency also said it would continue to monitor data on "potential impacts" of 5G as it becomes available.

An article available on PubMed Central, an archive of biomedical research hosted on the US National Institutes of Health's National Library of Medicine (NIH/NLM) website, appears to support the social media claims.

The study, titled "Evidence for a connection between coronavirus disease-19 and exposure to radiofrequency radiation from wireless communications including 5G," was published in the Journal of Clinical and Translational Research on October 26, 2021.

But NLM spokeswoman Christine Winderlin said: "The presence of any specific article or citation in NLM's physical or electronic collections, including PubMed and PMC, does not constitute agreement with, or endorsement of, or promotion of its contents by the NLM, the NIH, or the US federal government."

Mahadevappa Mahesh, chair of the American College of Radiology Commission on Medical Physics, said the social media claims are false and added that they are "causing confusion to general public."

Mahesh, who is also chief physicist at the Johns Hopkins Hospital and a professor in the Johns Hopkins Medicine Department of Radiology, said the journal that published the research on 5G is "a fishy setup" and dismissed the paper's content as "a bunch of baloney."

Just because a study is hosted by a legitimate website -- such as the NLM -- does not automatically mean the research is legitimate, he said. Readers must interrogate the journal that published the content, he explained, recommending looking up a journal's impact factor.

Impact factor measures how often the average article in a journal has been cited in a particular year and is used to assess the importance or rank of a journal. The figure is calculated by Clarivate, a public analytics company.

For example, the New England Journal of Medicine -- a reputable health research journal -- said it has the highest impact factor of any general medical journal at 91.245 in 2020.

By contrast, the Journal of Clinical and Translational Research does not appear in Clarivate's master journal list, meaning it did not receive a score. The journal has been accused of paying scientists to cite their content, therefore increasing their figure. Editorial staff denied the accusations.

"Influenza, commonly called the flu, is caused by a virus. However, flu-like symptoms can be caused by both viruses and bacteria. Neither viruses nor bacteria can travel on 5G transmissions," he said.

Ziskin, who is also the director of the Center for Biomedical Physics at Temple University and led a team that recently updated 5G-related exposure safety guidance, said his research indicates "clearly no harmful effects on humans are to be expected from 5G networks operated within national safety standard limits."