Skip to main content
A resident receives a Pfizer-BioNtech booster shot at a drive-thru Covid-19 vaccination site in Manila on January 13, 2022. ( AFP / STR)

An image is circulating in social media posts in the Philippines that claim it shows a vaccination exemption card. The card -- which features a QR code -- spread online as the government announced temporary restrictions for the unvaccinated in January 2022 as the country battled a record surge in Covid infections. However, the card is a fake, according to multiple government officials. The QR code on the card leads to a document that touts Covid misinformation previously debunked by AFP.

The photo was shared on January 16 in a Facebook group with more than 15,000 members. 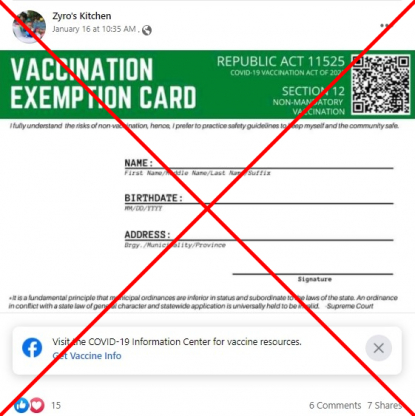 A QR code is shown next to the text which -- when scanned -- leads to a Google Drive that contains a file called "Coviducation infographic".

The infographic features claims such as "There is NO scientific proof for COVID19", "Masks are not proven to be safe" and "Experimental vaccines can do more harm than good".

The posts circulated days after the Philippines announced a controversial measure that temporarily banned unvaccinated people from using public transport in the capital Manila, where Omicron was fuelling a record surge in cases.

The ban was lifted on February 1, as the capital lowered its restrictions.

Various officials said the card shown in Facebook posts was not a government-issued document.

Jonathan Malaya, spokesman for the Philippines' interior and local government department said the card was a "fake".

"There is no such thing as a 'vaccination exemption card'. This is not authorized, issued, nor recognized by the government", he said in a statement on January 18.

"No document like this is being issued by the government," he said.

The government allows exemptions from Covid-19 vaccination for medical reasons.

The fake vaccine card's representation of the Covid-19 Vaccination Program Act of 2021 is also misleading.

It claims that Section 12 of the act gives details of "non-mandatory vaccination", when in reality, it does not mention this.

It says that the Philippine health department "shall issue a vaccine card to all persons vaccinated" and that the cards "shall not be considered as an additional mandatory requirement for educational, employment and other similar government transaction processes."

Responding to claims that Covid-19 does not exist, Heba Mostafa, an assistant professor of pathology at Johns Hopkins Medicine, told AFP in November 2020: "There is no question that SARS-CoV-2 exists and it was isolated in China early in January and was fully characterized and its full genome was deposited to the databases on January 10th [2020]".

On its information page about masks, the US Centers for Disease Control and Prevention said: "Masks and respirators are effective at reducing transmission of SARS-CoV-2, the virus that causes COVID-19, when worn consistently and correctly".

"Getting vaccinated could save your life," it says.