These photos have circulated in news reports about Vietnam, not Myanmar

A photo collage has been shared hundreds of times in Facebook in posts that say it shows an attack by an anti-coup suicide bomber in Myanmar. The claim is misleading; the image of burning tanks was taken in Vietnam in 1965, while the second photo circulated in news reports from August 2021 about a man in Vietnam who was arrested for allegedly beating a child.

The photo was published here on Facebook on January 22, 2022.

It has been shared more than 500 times. 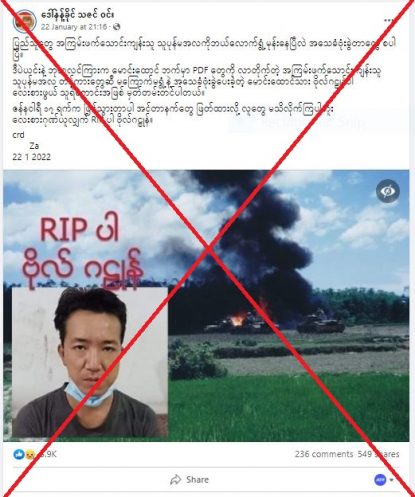 A screenshot of the misleading Facebook taken on January 26, 2022. ( Si Thu TUN)

Myanmar has been in turmoil since the military ousted civilian leader Aung San Suu Kyi on February 1, 2021.

The post claims the man in the photo -- named as "Bo Galon" -- was part of a suicide attack by the People's Defence Forces (PDF) -- who have been fighting back against the junta since the coup -- on military tanks between Tayabin and Budalin townships.

The Burmese-language caption reads in part: "Bo Galon was recorded as a respectable martyr for suicide bombing military tanks after they came to attack [People's Defense Forces] in Maung Htaung, between Tabayin and Budalin townships".

There have been no official reports about a suicide bomber attack between Tabayin and Budalin townships in January 2022.

The same photo collage has been shared here, here and here, alongside an identical claim.

A reverse image search on Google found the photo of the burning tanks published here on Vietnamese historical research website ChienTruongVietNam.com on June 12, 2021.

The photo caption reads: "American military tanks attack on the Van Tuong battlefield - The StarLite march in the Vietnam-US war."

Part of the Vietnamese paragraph translates to English as: "The Van Tuong battle - in the Operation Starlite was the campaign on the search and kill of the American troops in the Vietnam war in 1965."

Below is a screenshot comparison of the misleading Facebook photo (left) and the photo from ChienTruongVietNam.com (right).

A screenshot comparison between the misleading Facebook photo (L) and the photo from ChienTruongVietNam.com (R):

A similar photo was published here by Getty Images.

The caption reads: "Slightly angled wide shot, across open fields, of military vehicles near a flaming and smoking explosion at the edge of a forested area, Vietnam, 1965. (Photo by Stuart Lutz/Gado/Getty Images)"

Another reverse image search found the photo of the man published here on Vietnamese news website VN EXPRESS on August 5, 2021.

The photo's caption reads: "Nguyen Hoai Nam is at a police station in Binh Duong Province after an online video showed him beating a boy, August 5, 2021. Photo by VnExpress/Yen Khanh."

Below is a screenshot comparison of the misleading image (left) and the photo published by VN EXPRESS (right).

Another keyword search on Google found the similar article on a local news website about the man who reportedly beat a five-year-old boy.