Skip to main content
This photo released on January 20, 2022 shows destruction along the western beaches of Tonga's main island of Tongatapu from Hatafu to Vakaloa, following the eruption of the Hunga Tonga-Hunga Ha’apai undersea volcano on a nearby island on January 15, 2022 ( HANDOUT / AFP / Viliami Uasike Latu)

Social media posts suggest that the recent volcanic activity in Tonga was actually a nuclear blast. This is false; experts say factors including the absence of radiation and the presence of an active volcano make clear that a natural eruption occurred, and dismissed the idea that a nuclear device was detonated on the site.

"Tonga Eruption Possible Nuclear Detonation," says the title of a YouTube video posted on January 16, 2022 and viewed more than 20,000 times. 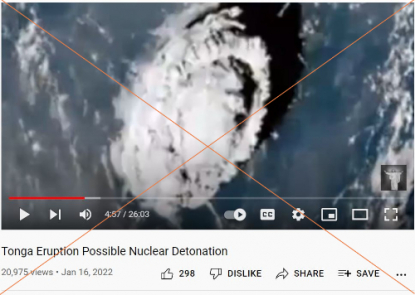 A screenshot of a YouTube video taken on January 21, 2022

Posts on Facebook and Twitter also sought to tie the devastation in the Pacific island nation to a nuclear event, echoing similar baseless claims that AFP Fact Check debunked following the massive 2020 blast at a port in Lebanon.

Tonga was hit by a huge underwater volcanic eruption that cloaked it in ash, unleashed a tsunami, and cut the archipelago off from the rest of the world.

The Tongan government has called the dual eruption-tsunami "an unprecedented disaster" and declared a nearly one-month national emergency.

The International Association of Volcanology and Chemistry of the Earth Interior told AFP that "the powerful explosive activity that happened on the 14th and 15th of January 2022 in the Tonga archipelago actually resulted from the submarine eruption of Hunga Tonga-Hunga Ha'Apai volcano."

The association emphasized that the volcano has erupted before, a point also made by volcanologist Alexandra Matiella Novak of the Space Exploration Sector at Johns Hopkins University Applied Physics Laboratory, who said it "will continue to do so."

The Global Volcanism Program at the National Museum of Natural History also attributed events on Tonga to a volcano and made no mention of a nuclear detonation.

Sam Rigby, senior lecturer in blast and impact engineering at the University of Sheffield, said a nuclear bomb with the same energy release would not produce a crater of the size observed in Tonga.

"A nuclear device buried deeper beneath the surface would not have released enough energy into the air to generate the shock and gravity waves that were recorded by many devices around the world," he said.

"Any time there is a large explosion, there are large numbers of people who claim it must be nuclear," he said, adding: "The reason is that all explosions look the same -- nuclear, conventional and natural. One cannot distinguish nuclear explosions visually from other kinds of explosions."

Only a very small number of nuclear weapons have such a large explosive yield, Lewis said. And even then, a nuclear detonation would produce radionuclides, which the Comprehensive Nuclear-Test-Ban Treaty Organization would detect -- something that did not happen in this case.

Climatologist Alan Robock agreed, saying: "There is no evidence of radioactivity, which would have been produced by a nuclear bomb."

AFP has debunked several inaccurate claims about the eruption and tsunami that followed.