Skip to main content
A cloud of smoke rises from the scene of an explosion in Beirut, Lebanon on August 4, 2020 (AFP / Anwar Amro)

Beirut blast was not a nuclear explosion

Social media posts claim a devastating blast at Beirut’s port was nuclear. This is false; Lebanese authorities have pointed to a huge cache of ammonium nitrate stored at the port, and experts say there is no evidence that it was a nuclear explosion. 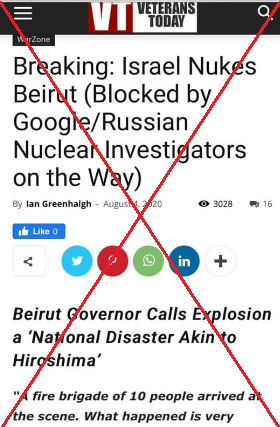 The image appears to be a screenshot of a headline from the “Veterans Today” website, which advertises itself as “Serving the Clandestine Community.”

The August 4 explosion at Beirut’s port was devastating, killing more than 150 people and leaving thousands wounded. But it was not nuclear.

Lebanon’s Prime Minister Hassan Diab said 2,750 tons of the agricultural fertilizer ammonium nitrate that had been stored for years in a portside warehouse exploded, sparking “a disaster in every sense of the word.”

US President Donald Trump said on August 5 that the explosion may have been an accident, after earlier claiming US generals had told him it appeared to have been caused by a “bomb of some kind.”

And US Defense Secretary Mark Esper said that “most believe that it was an accident as reported.”

Lebanon’s President Michel Aoun said on August 7 that the explosion was due to “either negligence or foreign interference through a missile or bomb,” though he made no mention of a possible nuclear blast.

Some posts claim that “Jeff Smith of the IAEA confirms this is a nuclear explosion.” A person by that name has also been tied to unsubstantiated claims of a possible nuclear blast in Yemen.

But International Atomic Energy Agency spokesman Fredrik Dahl told AFP by email: “The IAEA has made no such statements.”

Experts meanwhile said evidence does not indicate that the Beirut explosion was nuclear.

“It doesn’t look anything like a nuclear explosion,” Jeffrey Lewis, a nonproliferation expert at the Middlebury Institute of International Studies at Monterey, told AFP by phone.

Lewis also noted that the reddish-brown color of the cloud that rose over Beirut following the blast is “very typical of ammonium nitrate.”

Vipin Narang, an associate professor of political science at MIT who specializes in nuclear weapons and proliferation, agreed.

“It was an intense blast, and it is a tragedy for the people of Beirut. But it was not nuclear,” Narang told AFP by email.

Additionally, “nuclear mushroom clouds are not red,” as was the cloud in Beirut.

The explosion comes during the collapse of Lebanon’s economy -- yet another problem with which the crisis-hit country now has to contend.