Dialling 999 and pressing 55 to call for help in 'silent’ emergencies works in the UK, not SA

Facebook posts shared in South Africa claim that people forced to stay silent in an emergency situation should dial 999 and press 55 to dispatch police to their location. However, the claim is misleading: the phone numbers refer to a UK system. While the number 999 does work in South Africa, it redirects mobile phone callers to the emergency number 112, where an operator will assess the situation.

The claims have been shared hundreds of times, with captions encouraging users to further “spread the word”.

“If you're in a situation where you can't speak. Choking, heart attack, intruder, domestic violence, kidnapped etc.
Ring 999 when they answer press 55. This tells them you need help, but can't speak. They will dispatch police to you,” reads one Facebook post published on January 13, 2022. 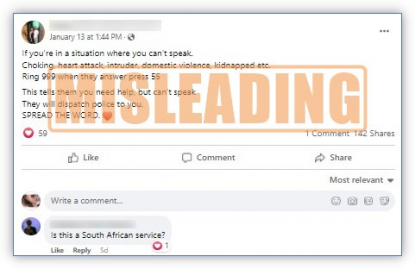 However, AFP Fact Check found that these numbers are for a UK emergency response system.

A Google search of keywords related to the claim listed emergency services in the UK, with mentions of several other countries. 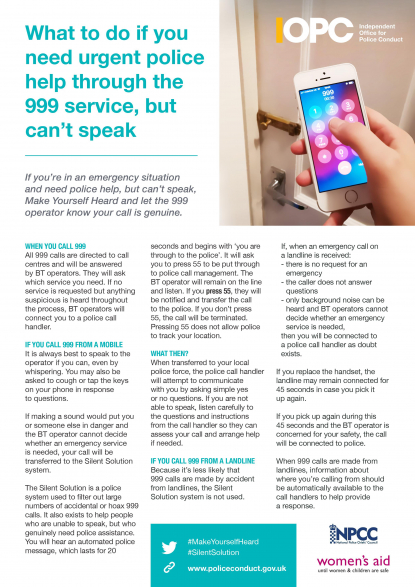 The claim being shared in South Africa appears to have been taken from the photo of a crumpled poster that used the same language in January 2020, according to the verification website Truth or Fiction.

The poster may pose a risk to people in real danger who believe police will arrive if they simply remain silent on the phone and dial 55. The Silent Solution awareness campaign was launched in 2019 by the Independent Office for Police Conduct (IOPC) after the murder a few years earlier of a woman who believed police deployment would be automatic when she made the call.

Kerry Power believed she could make a silent 999 call and police would automatically be sent to her home. Sadly, this isn’t the case. But there is something you can do - #MakeYourselfHeardhttps://t.co/roO3rFg9KTpic.twitter.com/VrKlLCz91W

The national emergency response number in South Africa is locally known as 10111, with 112 for mobile phones. The ambulance number is 10177.

If a caller in South Africa calls 999 from a mobile phone, they are automatically rerouted by their network provider to the 112 number, where they will follow prompts or speak to an operator who will assess their emergency.

“We have 08600 10111, we also use MySAPS app, those are the numbers that we use for emergencies and for reporting, any other number we don’t know about it,” Lieutenant Colonel Robert Netshiunda of the South African Police Service told AFP Fact Check.