A video has been viewed tens of thousands of times in social media posts that claim it is live footage of a volcano eruption in Tonga that triggered a tsunami in January 2022. The claim is false: the footage is actually a simulation of a volcanic eruption.

"Live recording of Tonga volcanic eruption, it is unknown whether the person who filmed the video is still alive or not," reads a simplified Chinese-language tweet from January 19, 2022. 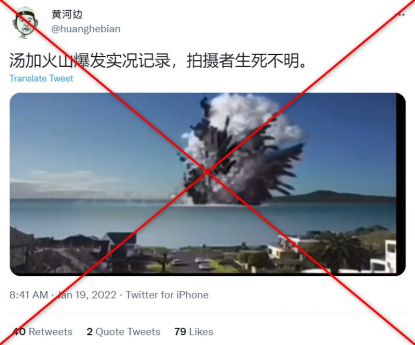 An underwater eruption of Tonga's Hunga Tonga-Hunga Ha'apai volcano triggered a tsunami that flooded Pacific coastlines from Japan to the United States on January 15, as AFP reported.

An identical video was also shared on Twitter, Gettr, Douyin and Weibo alongside a similar claim.

However, the video was shared in a false context.

A combination of reverse image search and keyword search on Google found a longer version of the video published here on December 19, 2019.

It was originally uploaded to the official YouTube channel for the Auckland War Memorial Museum in New  Zealand.

The video's description states it "is an educational simulation of an earthquake caused by a volcanic eruption".

Below is a set of screenshot comparisons of the video in the misleading post (L) and the video published by the Auckland War Memorial Museum (R): 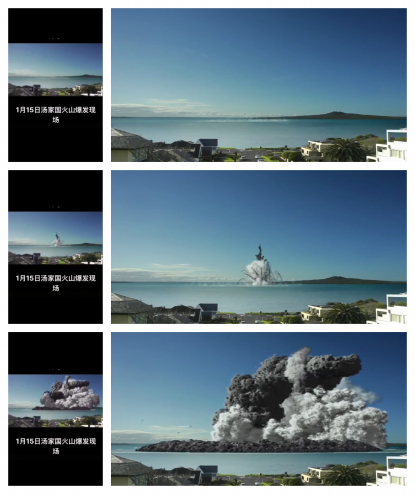 A set of screenshot comparisons of the video in the misleading post (L) and the video published by the Auckland War Memorial Museum (R).

"This projected sequence was designed to simulate a window view in a purpose-built set of an Auckland lounge room," the video's description reads in part. "High-end 3D technologies and particle effects were combined with a background plate creating a realistic rendering of a catastrophic event."

AFP published this fact check report about the same video in December 2019 after it circulated in posts that falsely claimed it shows a volcano eruption on New Zealand's White Island.