This is a simulation video of an undersea volcanic eruption

A video has been viewed tens of thousands of times in Facebook and YouTube posts that claim that it is live footage of a volcano eruption on New Zealand's White Island. The claim is false; the footage has actually been taken from a simulation video of an undersea volcanic eruption shown at a museum in New Zealand.

The two-minute video, shared on Facebook here where it has been viewed some 30,000 times, shows an underwater volcano erupting and  spewing ash and smoke which engulfs an inhabited coastal area.

The misleading Facebook post was uploaded December 16, 2019 with a caption saying: "Live volcano eruption in White Island of New Zealand. To start, have patience, wait for 8 to 10 seconds. After the eruption, in total darkness, wait for about 20 seconds, to see it clear up again???."

White Island, also known as Whakaari, is New Zealand’s most continuously active and largest volcano. The location can be seen on Google Maps satellite imagery here. 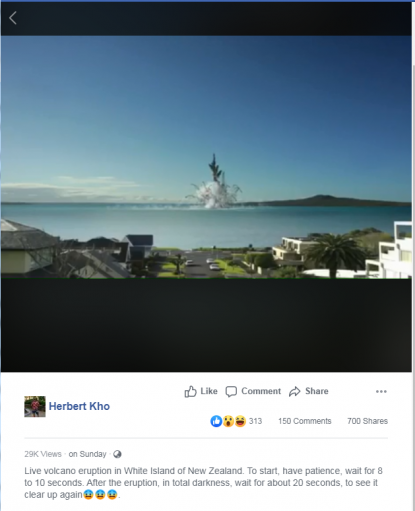 The claim is false; the misleading footage was taken from a simulation video of a volcanic eruption shown at a museum in Auckland, New Zealand.

A reverse image search and a subsequent keyword search on Google found the same video published on October 12, 2017 on the official YouTube channel of the Auckland War Memorial Museum.

The archived version of the now-removed video can be seen here. The museum reuploaded the video here on December 18, 2019.

The video is captioned: “This is an educational simulation of an earthquake caused by a volcanic eruption. It is also featured in our onsite Volcanoes Gallery, you can read more about this gallery here: https://www.aucklandmuseum.com/visit/..."

Below is a screenshot comparison between the video in the misleading post (L) and the clip in the YouTube channel of Auckland Museum (R):

On YouTube, visitors have posted their own experience watching the simulation video featured at the museum. One visitor described the special effects in the museum’s room, saying: “The room also shakes when the eruption starts to happen.”

The clip in the misleading post is part of Auckland Museum’s material for its “volcanoes” exhibition. The museum describes the scene in the video in its website here:

“Sit in the lounge of 7A Puia St, St Heliers and view a terrifying new eruption in Auckland harbour through the homes ranch sliders - supplemented by breaking news bulletins provided by the 1 News team. The house is engulfed within minutes of the eruption starting as it shakes and the base surges roar toward you.”

Brandspank, the New Zealand-based communication agency that created the video, had earlier published the video here on October 2, 2011, on video-sharing platform Vimeo.

The video is captioned: “This projected sequence was designed to simulate a window view in a purpose built set of an Auckland lounge room. High end 3D technologies and particle effects were combined with a background plate creating a realistic rendering of a catastrophic event. The result? Happy client, frightened children, de-valued waterfront property.”