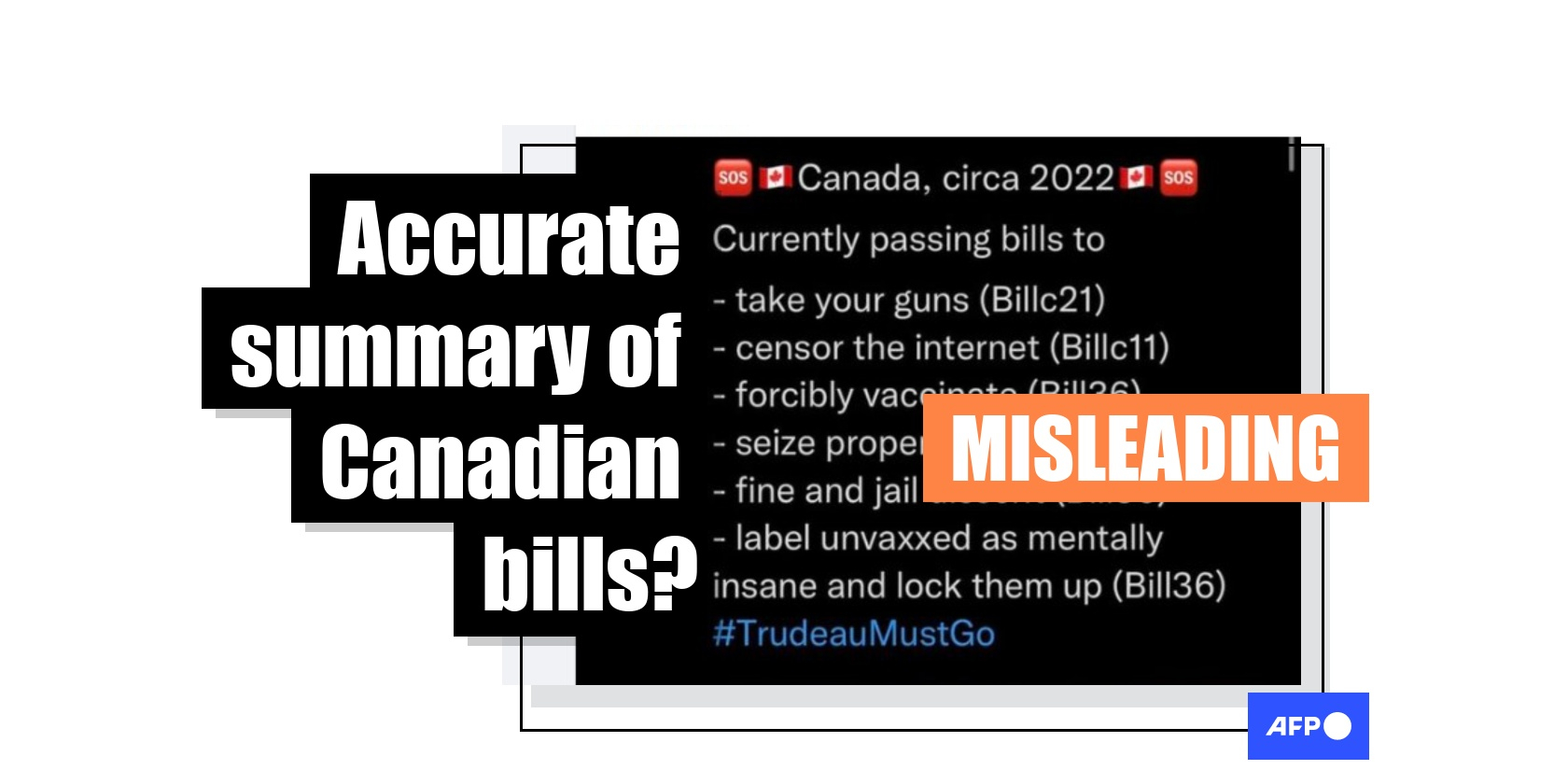 Social media posts claim Canada's parliament is considering bills that do everything from confiscating guns to forcibly vaccinating individuals. This is misleading; while the Liberal government is backing broad gun control legislation, there is no federal effort to reintroduce Covid-19 shot mandates.

The post includes an image with a list of legislation that will supposedly allow the government to:

But the posts -- which also claim the government will offer medically assisted death "if you don't like any of that" -- do not accurately describe the legislation that Canada's 44th Parliament is considering. AFP detailed each bill mentioned in the posts below.

Bill C-21, introduced in May 2022, proposes a number of reforms to gun laws in Canada.

The Liberal government calls the bill a "comprehensive strategy to address gun violence." It includes a handgun import ban and a proposed buy-back program to compensate those who own some of the 1,500 firearm models that have been prohibited since 2020.

C-21 aims to codify those policies -- making it harder for another government to overturn them, said Noah Schwartz, a gun policy expert at the University of the Fraser Valley in British Columbia.

In addition to banning certain weapons, C-21 aims to update Canada's "red flag" law. Such provisions allow individuals and law enforcement to request court orders to take away firearms or licenses from someone deemed a "danger to themselves or others."

Controversial amendments added to C-21 in December 2022 would expand the number and types of weapons that the legislation covers.

Public Safety Minister Marco Mendicino told the CBC that the government is "not going to target those guns which are used conventionally for hunting." But that has not assuaged the concerns of many parliamentarians and gun owners.

Bill C-21 passed its second reading in the House. As of January 25, the Senate had not yet considered the legislation.

Bill C-11, introduced in February 2022, aims to make significant changes to the Broadcasting Act by giving regulators more authority over online content. The government says this is aimed at promoting investment in Canadian content.

The bill has drawn support from Canadian broadcasters and criticism from content creators, particularly those who monetize videos on YouTube and TikTok.

Senator Paula Simons, an independent from Alberta, co-authored an amendment with Senator Julie Miville-Deschenes to ensure "digital creators -- even commercially successful ones -- are not encompassed by the act." As of January 25, the government had not yet said if it would accept the changes.

Although Simons wants to change the wording of the legislation, she told AFP that "at no time -- even in its most problematic, unamended form -- did the bill ever censor the internet." She said the main issue is who will be considered a Canadian content creator.

"Absolutely no time ever did this bill regulate what people could say on Twitter, or what they could say on Facebook," Simons said.

Bill C-11 had passed three readings in the House and one in the Senate as of January 25.

Contrary to the social media posts, there is nothing in Bill C-36 that relates to dissent or vaccination.

The appropriation bill, which became law on December 15, 2022, grants "certain sums of money for the federal public administration for the fiscal year ending March 31, 2023."

The posts may be referencing Bill C-36 from the previous Parliament. Introduced in June 2021, that legislation sought to amend the criminal code to make it a "discriminatory practice" to publish hate speech online in a way that is "likely to foment detestation or vilification of an individual or group of individuals on the basis of a prohibited ground of discrimination."

Ian McLeod, a spokesman for the Department of Justice, said the bill "would have helped protect Canadians from hate communicated both online and offline, while respecting rights and freedoms."

However, the bill died when Parliament dissolved on August 15, 2021 after a snap federal election was called.

Canada enforced strict Covid-19 vaccine requirements for both domestic and international travel in 2021 and the first half of 2022. But the mandates were suspended in June 2022 -- and there is no federal push to reintroduce them.

The posts may also reference Bill 36 in British Columbia, which in 2022 replaced the Health Professions Act. It makes sweeping changes to the regulatory colleges that oversee medical professionals and has faced backlash from associations who say they oppose the removal of doctor-elected members to the college boards.

John Carpay, president of the Justice Center for Constitutional Freedoms, raised concerns that Bill 36 could empower the provincial health minister to mandate vaccination for health care workers as a condition of licensure, but the bylaws have yet to be created.

Some of the social media posts say that if you disagree with giving more power to the government it will "offer you Medical Assistance in Dying (MAID) and finish you off."

MAID was the subject of both controversy and misinformation in 2022.

It is intended for adults with a "grievous and irremediable condition." The vast majority of Canadians who apply for MAID have serious health conditions such as terminal cancer, according to the program's third annual report.

MAID eligibility was set to expand in March 2023 to include people suffering from mental illness. But Justice Minister David Lametti and Minister for Mental Health and Addictions Carolyn Bennett have said they plan to introduce legislation to delay any changes.

More of AFP's reporting on misinformation in Canada is available here.