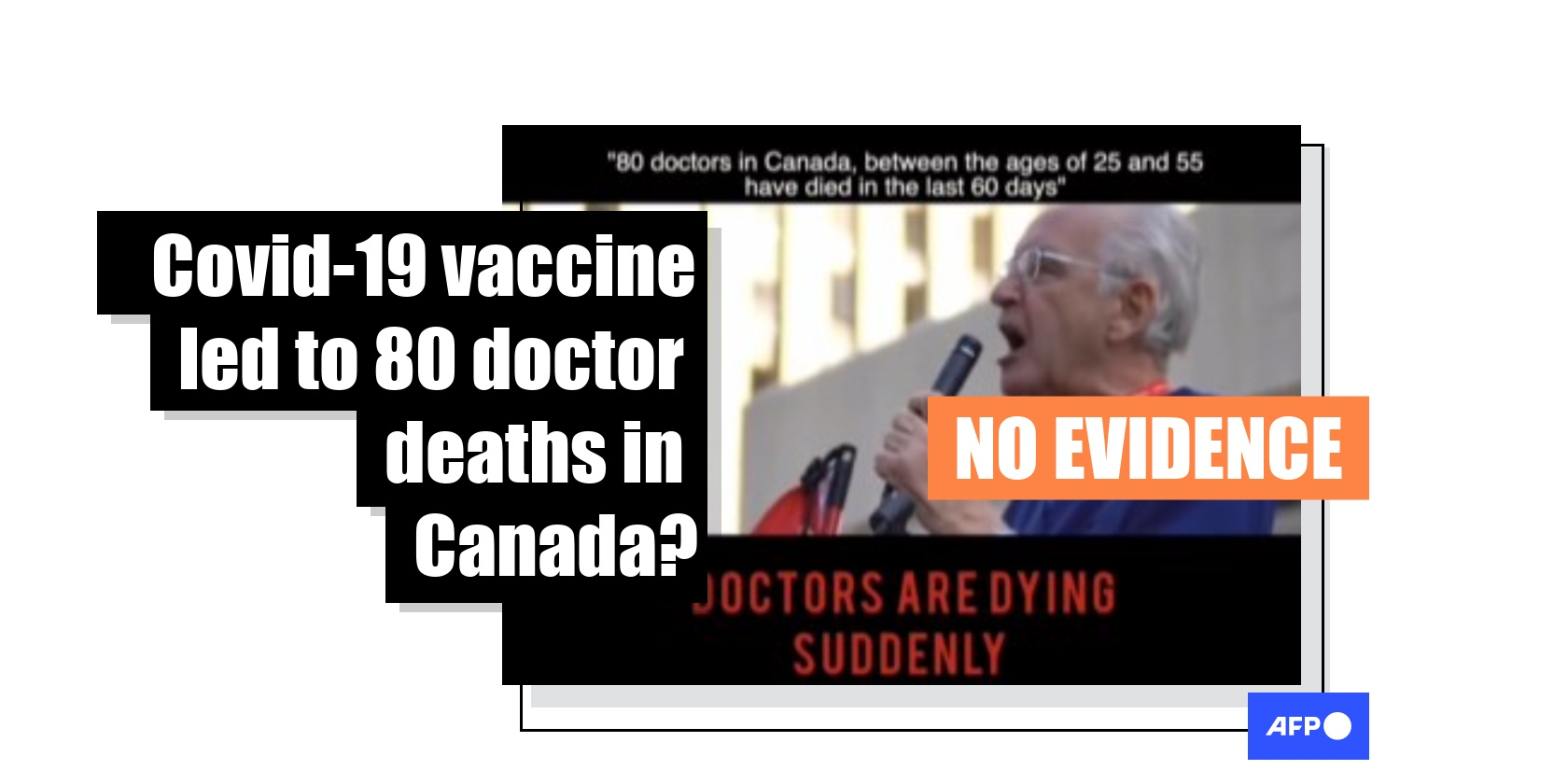 Covid-19 vaccines are highly effective at protecting individuals from severe disease and death, but claims on social media linking the shots to the sudden deaths of doctors in Canada have been shared tens of thousands of times. There is no public data to back the claim and more than a dozen of the doctors mentioned in posts died from unrelated illnesses or accidents.

"80 doctors in Canada between the ages of 25 and 55 have died in the last 60 days," says text above a video shared in a December 21, 2022 Instagram post from Michelle Lindsay, a leader for the People's Party of Canada in Halifax who ran for Parliament in 2021.

Other posts sharing the same video can be found on Instagram -- the latest in a series of unproven claims attempting to tie the deaths of Canadian doctors to Covid-19 shots. The posts do not identify the speaker in the video, but AFP searched the phrase "80 Canadian doctors died" and found a tweet indicating the man is Chris Shoemaker, a family doctor in Ontario who regularly posts videos making inaccurate claims about Covid-19 vaccinations.

The video was filmed at a protest in Toronto on October 22, 2022 and has been viewed tens of thousands of times on Rumble, Bitchute and Odysee. It resurfaced in December, amid a surge in anti-vaccine claims following interest in the misinformation-laden film "Died Suddenly" which AFP debunked here.

In the clip, Shoemaker claims: "80 doctors in Canada between the ages of 25 and 55 have died in the last 60 days and it's only the physicians who are getting third and fourth shots who are dying suddenly."

Most Canadian health care workers were mandated to receive Covid-19 vaccines under provincial regulations or by their employers, but Health Canada called Shoemaker's claim "misinformation."

"Claims that 80 Canadian doctors died because of Covid-19 vaccines are unsubstantiated," it said in a statement emailed on January 4, 2023.

"Immunization is one of the most important ways to protect the health of people in Canada and around the world" the statement continued, pointing to the success of Covid-19 vaccines in preventing "thousands of hospitalizations and deaths."

The Public Health Agency of Canada publishes regular reports on adverse events following immunization and the latest data (up to December 9, 2022), did not identify any new safety signals for the shots.

Shoemaker does not offer a source for his claim, but keyword searches bring up links to articles published by outlets identified for spreading false information, including The Epoch Times and Druthers, a print publication the Canadian Anti-Hate Network found to be devoted to Covid conspiracies.

A November 2022 Druthers story headlined "80 Canadian doctors VAXXED and dead" was written by Mark Trozzi, an Ontario doctor who has been referred to the Discipline Tribunal of the College of Physicians and Surgeons of Ontario for allegedly "making misleading, incorrect or inflammatory statements about vaccinations, treatments and public health measures for Covid-19."

The story cites a letter sent by William Makis to the Canadian Medical Association (CMA) in which he says he compiled a database of physician deaths, basing his figures in part on obituaries published on the CMA's website.

Makis, who was involved in a long legal battle with Alberta Health Services over his termination, also made the claim in an interview with Laura-Lynn Tyler Thompson, a former co-host of the Christian news program The 700 Club Canada. She has used her social media and live events across Canada to give a platform to doctors including Makis, Shoemaker and Roger Hodkinson who speak out against the Covid-19 vaccines and other measures aimed at slowing the spread of the disease.

The Canadian Medical Association called claims about recent physician deaths "conspiracy theories" and told AFP in a December 13 email: "There is no evidence to confirm or support the various theories that have been circulated."

It said the In Memoriam section of its website "should never be viewed as an exhaustive list of physicians' deaths or as evidence to support conspiracies surrounding the Covid-19 vaccines or other issues."

AFP reviewed obituaries and news reports about the deaths of all 80 doctors pictured in Druthers and none mentioned vaccination as a cause of death. Contrary to Shoemaker's claim, the doctors included had died as far back as December 2020 -- not within the last 60 days -- and 37 of the individuals were older than age 55.

In 12 of the obituaries, cancer was cited as the cause of death, including one man who had been diagnosed withHodgkin's Lymphoma years prior to the pandemic. Medical experts previously told AFP that Covid-19 vaccines are not linked to an uptick in cancer deaths.

One death was attributed to "an ongoing battle with mental illness," one to a childhood heart defect, while two of the individuals died in accidents -- drowning and a car crash.

In one of the earliest iterations of claims about Canadian doctors, the Gateway Pundit -- a website AFP has regularly fact-checked for spreading Covid misinformation -- said in a July 2022 story that three doctors, Lorne Segall, Stephen McKenzie, and Jakub Sawicki, "died suddenly," linking their passing to the hospital where they worked administering fourth Covid shots to staff.

This claim was debunked by Trillium Health Partners in Mississauga on Twitter. "The rumour circulating on social media is simply not true. Their passings were not related to the Covid-19 vaccine," it said on July 27, 2022. All three men had cancer.

CTV spoke with Iris Sawicki, the wife of Jakub Sawicki, who said he had been fighting aggressive stomach cancer since August 2021.

An obituary for Segall said he too had been fighting cancer for a year, while McKenzie's obituary, published in The Globe and Mail, said he lost a "courageous battle with cancer."