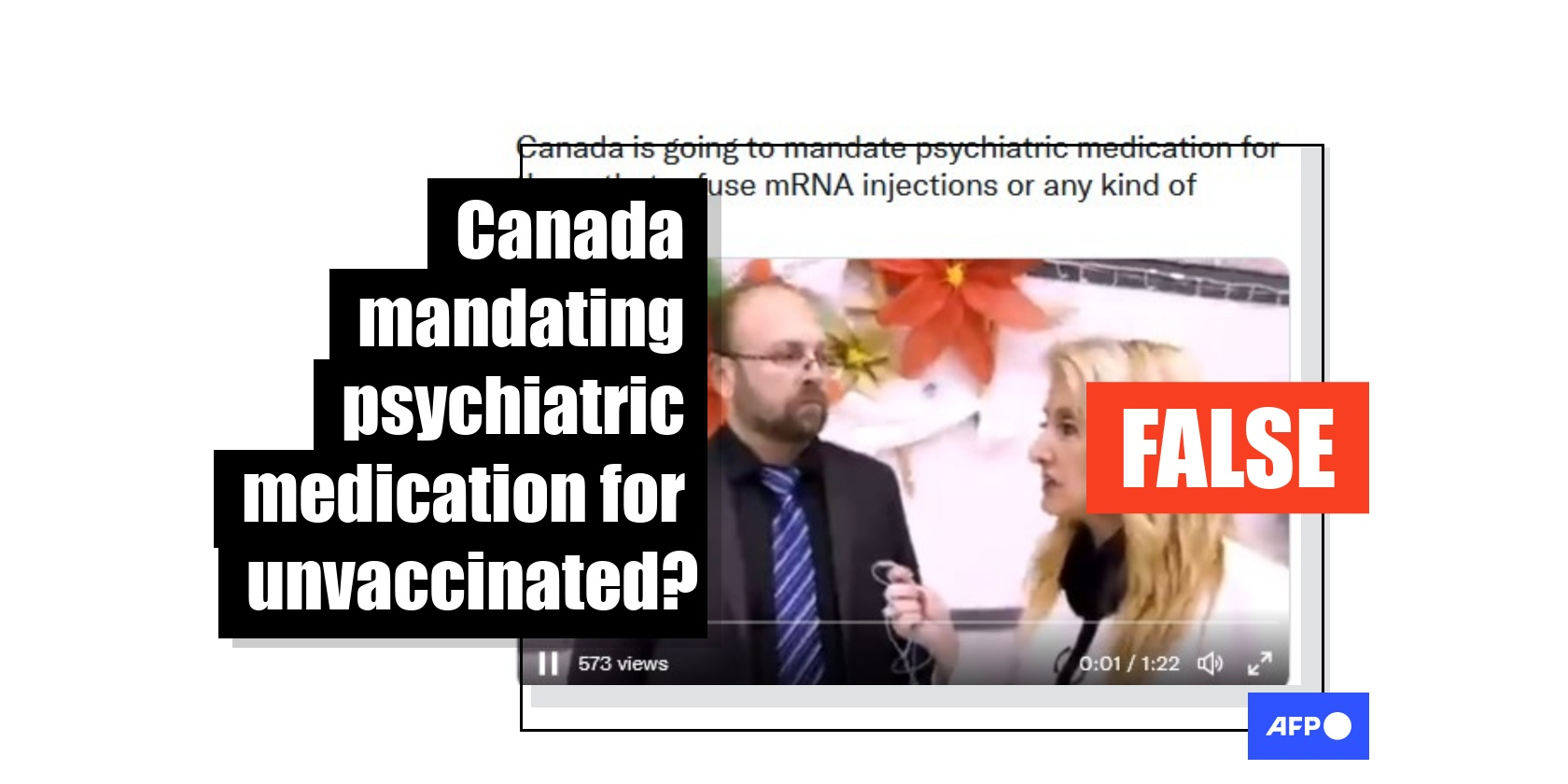 More than 80 percent of Canadians have been vaccinated against Covid-19, but social media posts claim that Canada will mandate psychiatric medication for people refusing the jab. This is false; the posts misinterprets guidance from the College of Physicians and Surgeons of Ontario (CPSO) that encourages physicians to discuss medication or therapy with patients who display anxious and avoidant behaviors -- including debilitating fear of needles -- rather than exempting them from vaccination.

"Canada is going to mandate psychiatric medication for those that refuse mRNA injections or any kind of vaccination," claims a November 21, 2021 tweet that has been shared hundreds of times.

Some of the posts include a video interview of William Makis, an Alberta doctor who has shared misinformation, by Laura-Lynn Tyler Thompson, leader of the Christian Heritage Party of British Columbia.

In the video she posted on Odysee, she says: "You've talked about, even they recommend, perhaps psychiatric medication or something for people that don't want to take a vaccine."

Makis replies: "This has come out recently out of the College of Physicians and Surgeons of Ontario. The College sent out a letter or a memo to all the doctors in Ontario suggesting to them -- now so far they're not mandating it, they're just suggesting it -- that any of their unvaccinated patients, that they should consider that they have a mental problem and that they should be put on psychiatric medication."

Makis does not claim that Canada mandated psychiatric medication for unvaccinated patients, but saying that it was suggested by the CPSO is also misleading.

A spokesperson for the CPSO told AFP on November 24: "This false interpretation that is being disseminated has no basis in fact or reality."

The CPSO's exact guidance is available in the frequently asked questions section of its website.

In a section relating to when doctors should grant medical exemptions for Covid-19 vaccines, it says: "It is also important that physicians work with their patients to manage anxieties related to the vaccine and not enable avoidance behavior. For example, for extreme fear of needles (trypanophobia) or other cases of serious concern, responsible use of prescription medications and/or referral to psychotherapy may be available options."

The CPSO spokesperson said that its initial guidance had been "grossly misinterpreted" and it was later clarified.

Looking at archived versions of the webpage reveals that the text was edited at some point between September 8 and October 5 to include the example of trypanophobia. Previously it just said: "In cases of serious concern, responsible use of prescription medications and/or referral to psychotherapy are available options." 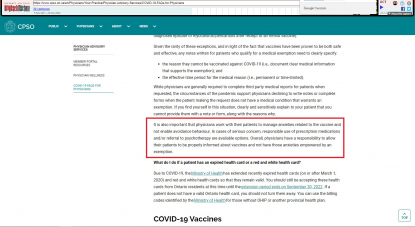 Screenshot of an archive of the CPSO website dated September 8, 2022 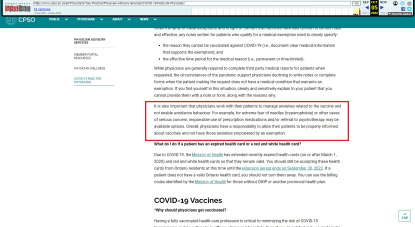 Screenshot of an archive of the CPSO website dated October 5, 2022

CPSO said the guidance was created "to encourage physicians to work closely with patients who may wish to be vaccinated in order to protect themselves and others, but who were unable to do so as a result of a fear of needles."

The excerpt "refers specifically to trypanophobia, which is a disorder recognized in the Diagnostic and Statistical Manual of Mental Disorders, 5th Edition, in which (among the potential symptoms) a patient may faint at the mere thought of a needle."

The spokesperson said: "It of course goes without saying that we would expect physicians to support their patients in managing any psychological or physical conditions that their patients are seeking support for."

However, the CPSO made clear that it "does not set diagnostic criteria for mental health disorders, and even if that weren't the case, there are laws (in addition to College policies) that would prohibit physicians from administering drugs to patients without their consent."

Canada lifted all remaining Covid-19 vaccine requirements for travelers at its borders on October 1, 2022.

As of November 14, 2022, more than 80 percent of the Canadian population had been fully vaccinated against Covid-19.