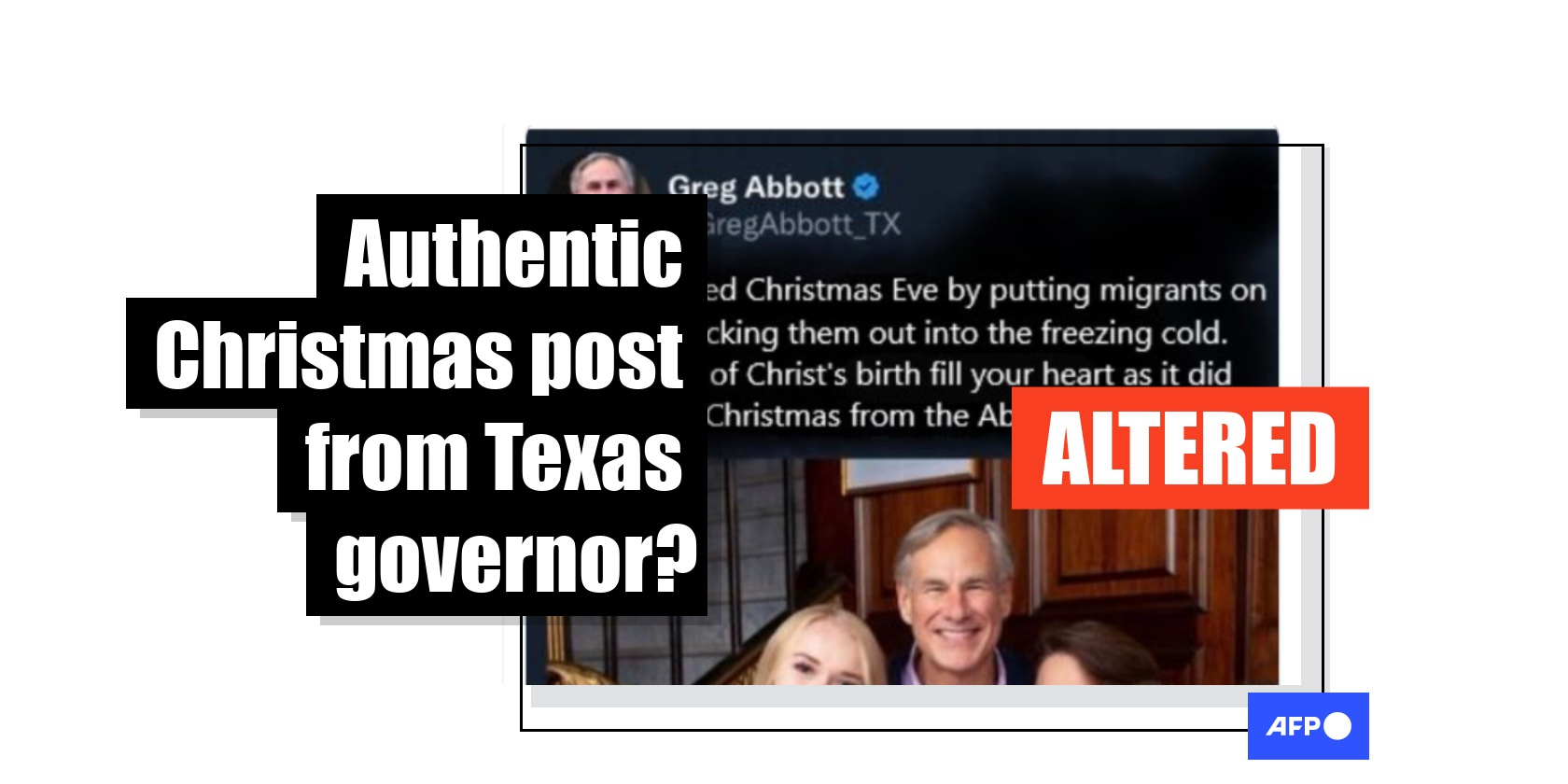 An image shared online purports to show a tweet from Texas Governor Greg Abbott about busing migrants across the US amid frigid Christmas Eve weather. But while more than 100 migrants from Texas were dropped off in the US capital on December 24, 2022, the post is fabricated; it does not appear on live and archived versions of Abbott's Twitter feed.

"We celebrated Christmas Eve by putting migrants on a bus and kicking them out into the freezing cold," says what appears to be a tweet from Abbott's personal account. "May the joy of Christ's birth fill your heart as it did ours. Merry Christmas from the Abbott family."

Posts sharing the supposed message -- which features a photo of Abbott with his wife and daughter -- popped up across platforms, including Facebook, Instagram and Twitter. One December 26, 2022 tweet from American actress and singer Bette Midler received more than 7.7 million views. 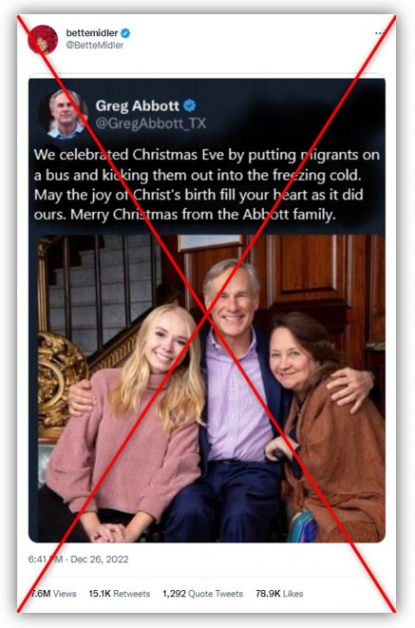 Some social media users commented on the purported message that Abbott lacked "Christian values." Another post garnering thousands of views on Reddit was shared as "satire."

The posts spread after busloads of migrants from Texas arrived near Vice President Kamala Harris's residence in Washington on December 24, one of the coldest Christmas Eve nights on record in the US capital. After the White House criticized the move as "cruel, dangerous and shameful," Abbott spokeswoman Renae Eze claimed in a statement to various news outlets that the migrants signed consent waivers and "willingly chose to go."

Abbott, who was recently re-elected to a third term, and other Republican governors have repeatedly sent migrants north to protest President Joe Biden's immigration policies.

While some social media users posted the alleged screenshot with disclaimers noting it was fabricated, others appeared to believe the tweet was authentic.

But live and archived versions of Abbott's Twitter page show he authored no such post. It also does not appear in databases from PolitiTweet and ProPublica's Politwoops, which collect deleted tweets from public figures.

No such post is visible on the Twitter feeds for Abbott's office or campaign, either. However, he did post a Christmas message from his personal account using the same photo with his wife and daughter.

From our family to yours, Merry Christmas! pic.twitter.com/76n0MLgx0y

Abbott shared other holiday messages and well-wishes from that account between December 24 and 26, along with posts expressing gratitude to the Texas National Guard, praising the state's energy grid, championing economic growth and warning about fentanyl.

On December 27, Abbott mentioned his efforts to transport migrants across the country.

"Texas has bused over 15,900 migrants to sanctuary cities," he tweeted. "Over 8,900 to DC. Over 4,900 to NYC. Over 1,500 to Chicago. Over 630 to Philadelphia. We’re providing relief to local communities overwhelmed by President Biden’s open border policies."

AFP reached out to Abbott's office for comment, but a response was not forthcoming.

AFP has debunked other fake tweets here and here.