Facebook posts falsely claim that the World Economic Forum (WEF) has called for "millions of cats and dogs worldwide to be slaughtered" to fight climate change. The false claim appears to originate from a website that has previously spread misinformation. AFP found no trace of such an initiative and a WEF representative said the allegation was baseless.

"The World Economic Forum is now calling for millions of cats and dogs worldwide to be slaughtered in an effort to reduce the 'carbon pawprint' they produce as a result of eating meat..." reads a Facebook post from December 13.

The post appears to show a screenshot of a Rumble video from December 9 by a channel called The People's Voice, which reads: "WEF Wants To Slaughter Millions of Pet Cats and Dogs To Fight Climate Change". 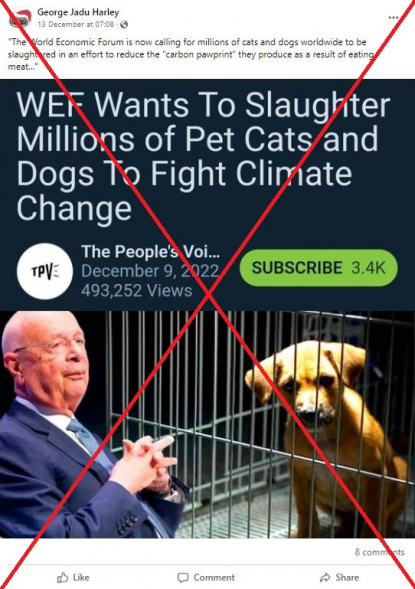 The WEF, which hosts meetings between world leaders every year in Davos, Switzerland, is regularly targeted by misinformation.

"What will it take to see how deranged and evil they are...?" read one comment.

"They are doing it already. It's just not widely known," another wrote.

On the WEF's website, the most recent articles on the environmental impact of pets -- specifically their diets -- were published in 2017, 2019 and 2020.

However, none suggest the idea of "slaughtering" pets.

A representative for the WEF rejected the claim.

"The WEF has never made such a statement" or taken such an initiative, the spokesperson told AFP on December 13.

The claim appears to originate from an article by News Punch, which has previously spread misinformation, headlined: "WEF Wants To Slaughter Millions of Pet Cats and Dogs To Fight Climate Change".

The article says the organisation "wants to introduce an international policy that would require the majority of pet owners to euthanize their animals".

It mocks a report from CNN that purportedly suggests pet owners "starve their pest to death in an effort to combat climate change" and an article purportedly "urging pet owners to let their pets die to fight inflation" from Bloomberg.

In fact, the CNN and Bloomberg articles on the climate and financial impact of pets include advice such as switching their diet, buying biodegradable bags for dog waste, seeking an environmentally friendly litter option for cats and reconsidering costly medical bills for pets.