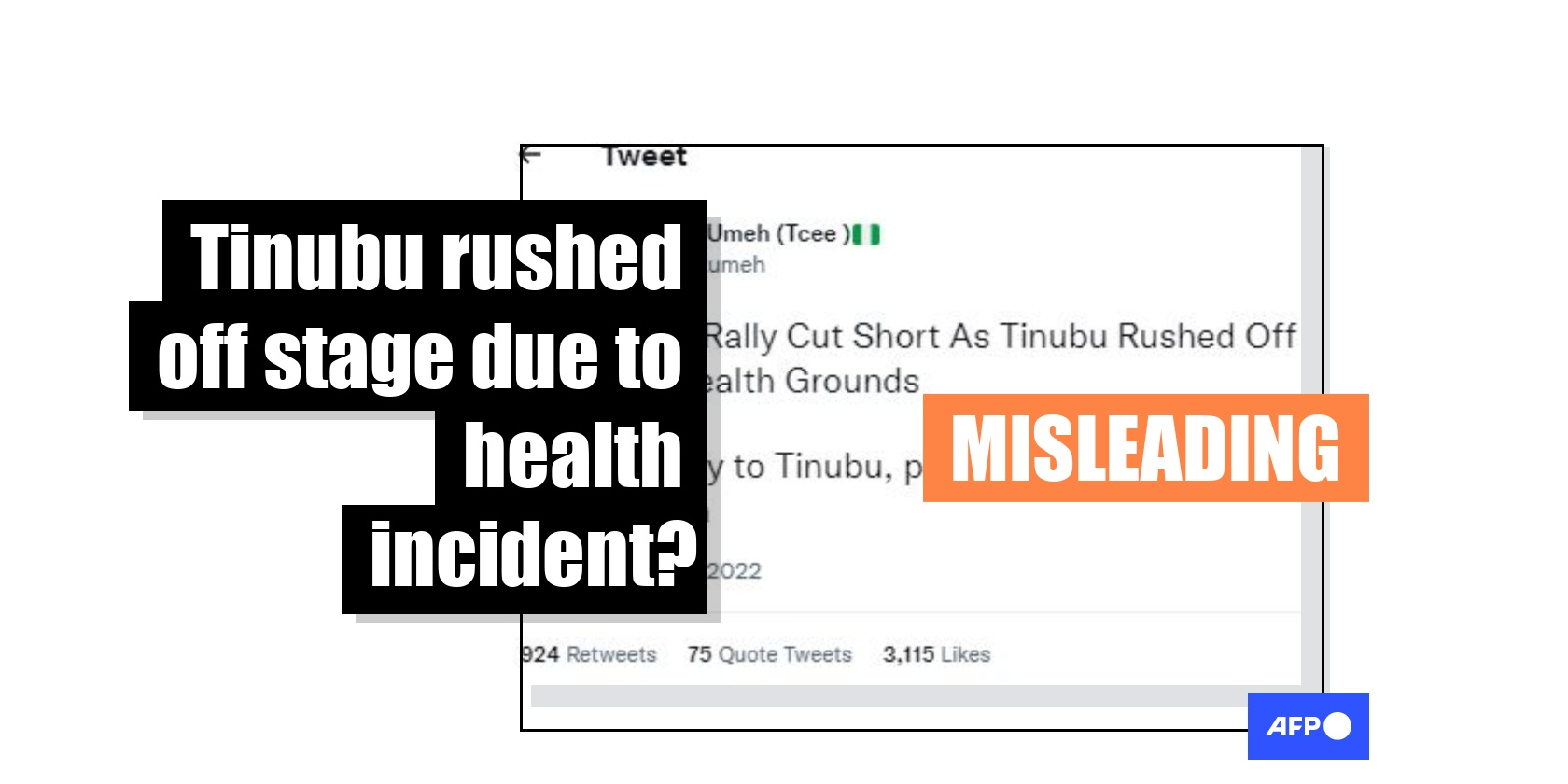 Nigerian social media users are circulating a post claiming that the All Progressives Congress party’s presidential candidate Bola Tinubu was rushed off the stage at a campaign rally in Minna, Niger state in north-central Nigeria “on health grounds.” But this is misleading: Tinubu spoke briefly at the Minna rally, then, after being warned that the stage was overcrowded, he spoke a bit more before leaving unaided. He later attended other functions in the same town.

The claim was tweeted by an account with more than 47,000 followers and a history of sharing content favourable to one of Tinubu’s rivals, the Peoples Democratic Party presidential candidate Atiku Abubakar. 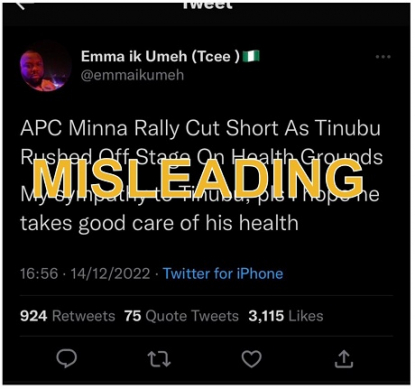 A screenshot of the misleading tweet, taken on December 20, 2022

“My sympathy to Tinubu, pls I hope he takes good care of his health,” the tweet adds.

The same claim was also shared on Facebook and by a local news blog.

Political parties are campaigning ahead of polls in February when voters will elect a new leader.

Tinubu, a two-time governor of Lagos state, Nigeria’s commercial capital, has come under intense scrutiny over his health since he won the APC nomination. AFP Fact Check has debunked several claims about his health, including here and here.

However, Tinubu did not leave the stage in Minna because of a medical emergency.

By searching online using keywords like “Tinubu in Minna” and “APC rally in Minna”, AFP Fact Check found footage from the rally held on December 14, 2022.

In the first part of the video, Tinubu is seen on a crowded stage holding a broom — the symbol of his party — and waving at the crowd.

At the 3’10” mark in the clip, the microphone is handed over to Tinubu who enthusiastically and repeatedly shouts “APC” and “Nigeria”.

The event announcer is then heard urging those on the stage to move off as Tinubu was speaking.

“Please move back off the stage, the stage is getting down (sic),” the announcer says.

A man in a black suit mentions something to Tinubu, who shows no outward appearance of discomfort or distress when the announcement is made.

The microphone sound disappears as Tinubu shouts “God bless Niger”, referring to Niger state. Shortly after, he turns and calmly leaves the stage unaided, along with the man in the black suit and other party leaders.

After the rally, Tinubu went on to inaugurate his presidential campaign office in Minna. He later headed to the Emir of Minna’s palace.

In another video, Tinubu is seen returning to Abuja that same evening after his trip to Minna.

In a statement published on Tinubu’s official campaign website, his spokesperson Bayo Onanuga denied Tinubu was rushed off the stage owing to a health problem.

“Contrary to the rumours that he was rushed off stage because of health concerns, Tinubu cut it short to attend to other programmes of the day. He commended the party supporters for coming out en masse to witness the flag off of the presidential campaign,” Onanuga said.

AFP Fact Check has debunked several false and misleading claims linked to the 2023 election in Nigeria. You can find our coverage here.