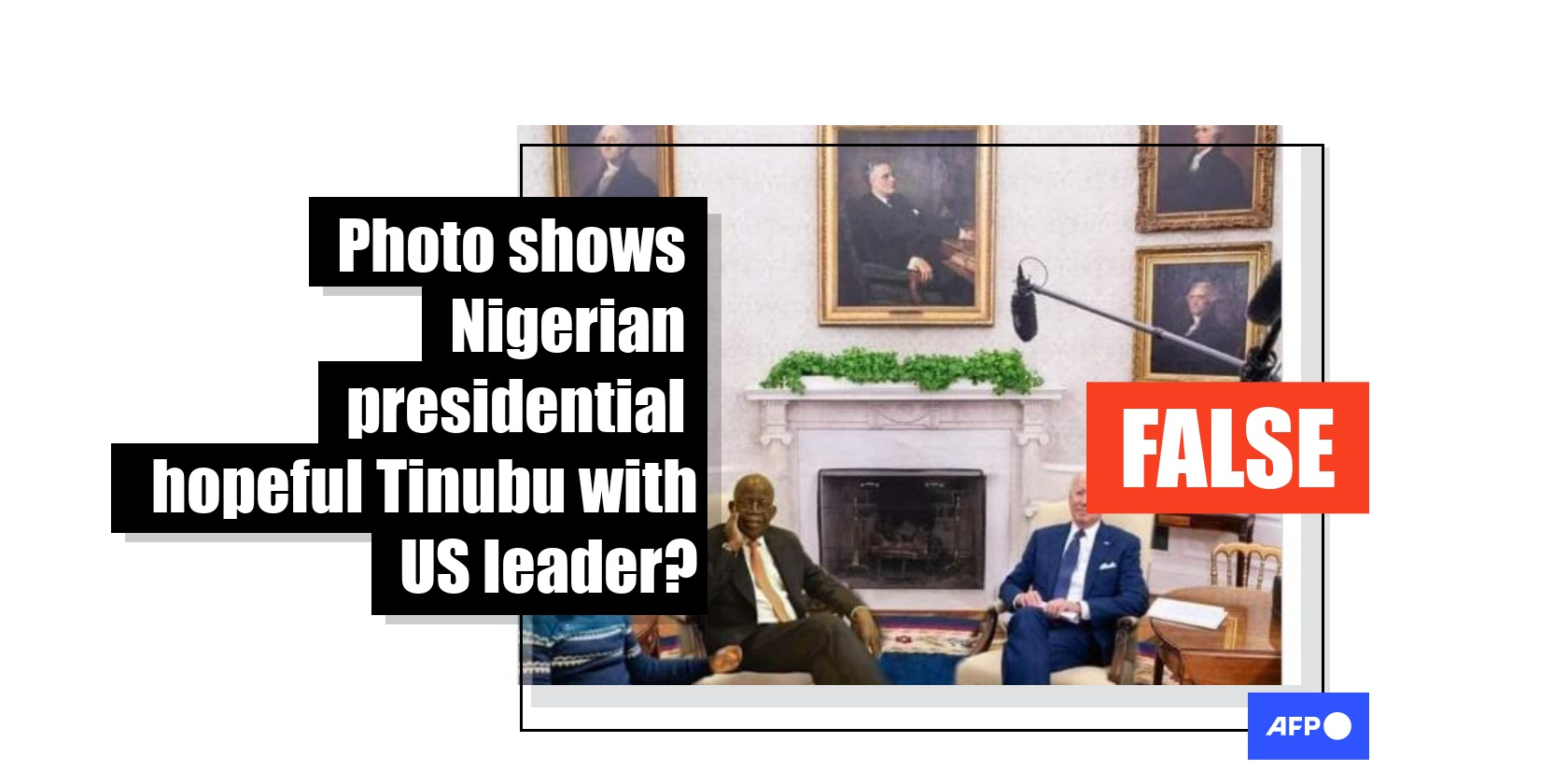 A post with a photo circulating on Nigerian social media claims to show the Nigerian ruling party’s presidential candidate Bola Tinubu with US leader Joe Biden in the Oval Office. But this is false: AFP Fact Check found that the photo is a doctored version from a White House visit by Iraqi Prime Minister Mustafa Al-Kadhimi. Tinubu does not feature in the original picture.

“Happening now: @officialABAT on a courtesy visit to US President Joe Biden as part of his US on international engagements. Obidiots say Tinubu cannot visit US based on his indictment. He is there right now live with the US President. Let your Obi visit too. Mumu pipo (sic),” reads a tweet published on November 29, 2022. 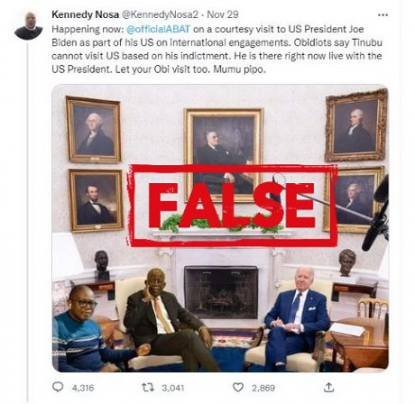 A screenshot of the false tweet, taken on December 1, 2022

The image purportedly shows Tinubu sitting with Biden and an unidentified man wearing a jumper in the White House Oval Office.

It surfaced as Nigeria prepares to go to the polls in February to elect a new leader. Tinubu, a two-time governor of Lagos state, Nigeria’s commercial capital, has come under intense scrutiny since he won the nomination of the ruling All Progressives Congress (APC).

The claim that he met Biden is false.

By searching online for the names of the US and Iraqi leaders along with the keywords “oval office”, AFP Fact Check found the original photo taken by the United Press International (UPI) news agency during the visit of Iraqi Prime Minister Al-Kadhimi to Washington DC on July 26, 2021. 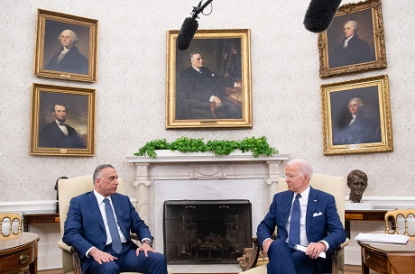 The original photo shows Biden sitting beside Al-Kadhimi. In both the original and altered photos, Biden can be seen holding a piece of white paper, with a stack on the table to his left.

A green plant in a flowerbox above the fireplace matches both pictures.

Comparison screenshots showing a plant on the mantelshelf

The booms of three microphones are also visible in both images.

A screenshot showing similarities between the original photo, left, and the altered version

In both the original and altered photos is a collection of artworks. They include portraits of former US presidents as well as bronze busts of Robert Kennedy and Martin Luther King Jr.

Tinubu spokesman Bayo Onanuga described the photo as “fake”, noting that Tinubu was in Abuja on the day the image was taken at the White House.

Biden, meanwhile, was in Michigan on the day he purportedly met Tinubu. Biden also met US congress leaders that day.

Tinubu went to university in the US and worked there for several years before he returned to Nigeria to join ExxonMobil. He quit to join politics and was elected a senator in 1992.

His health, schooling, name and source of wealth have all been subjects of controversies and false or misleading claims. AFP Fact Check has debunked several, including here, here, here and here.