Social media posts have shared a video claiming that it shows "the French" retaliating against the government of Burkina Faso by destroying pick-up trucks at a mine purportedly targeted for takeover by the state. But the claims are false: the mine belonged to a Canadian company before it was liquidated as a result of devastating floods in April. Equipment deemed unfit for use after the disaster was destroyed, including the vehicles seen in the video. France also has no mining interests in Burkina Faso.

"Burkina Faso in the process of nationalizing its mining resources, Perkoa mine french officials destroy their vehicles before leaving (sic)," reads a tweet from November 15, 2022, which included a video of two pick-up trucks being crushed by a large dozer. 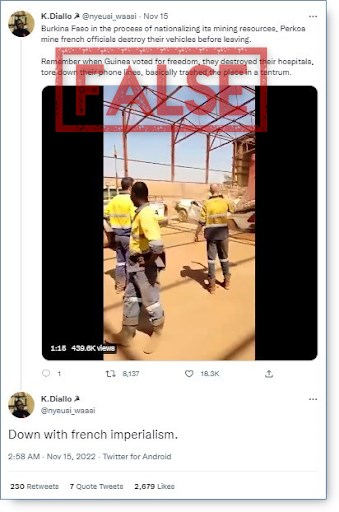 Similar posts were published on Facebook in French (here, here and here) and on Twitter, claiming officials from a French company ordered the destruction of various vehicles in retaliation for a purported decision by Burkina Faso’s government to nationalise its mines.

Canadian mine, not French

Google search results showed that Perkoa mine, which produces zinc, was majority-owned by Canada’s Trevali Mining Corporation until recently.

According to its website, the company also operates mines Rosh Pinah in Namibia and Caribou in Canada, producing zinc-lead-silver.

Trevali owned 90 percent of Perkoa through its subsidiary Nantou Mining Burkina Faso SA but announced the liquidation of the mine on November 14, 2022.

"Further to the October 6, 2022 press release of the Company, the Judicial Tribunal of Commerce in Burkina Faso has granted an order providing for the liquidation of the Company’s 90%-owned subsidiary Nantou Mining Burkina Faso S.A... A liquidator has been appointed by the Judicial Tribunal and notice of such appointment is expected to be published in local newspapers in accordance with applicable laws and the terms of the liquidation order," the statement read.

It added that "the liquidator has assumed responsibility for the management of the affairs of Nantou Mining and Trevali no longer exercises operational control over Nantou Mining or the Perkoa mine".

The liquidation was attributed to bankruptcy following deadly flooding at Perkoa mine on April 16, 2022, according to articles here and here. 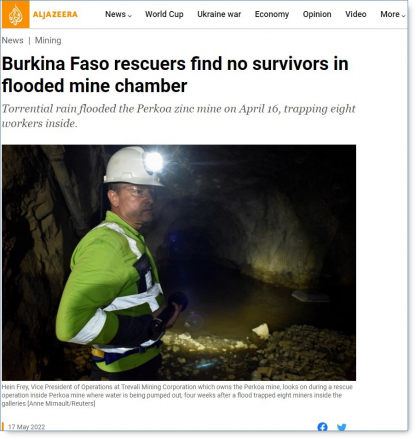 Vehicles unfit for use

A reverse image search using the InVID-WeVerify tool led to several articles related to the destruction of the pick-up trucks seen in the video and the flooding at the mine earlier this year.

A French tweet from Burkinabe journalist Roméo Koeta called the vehicles "dilapidated" and "unfit for circulation” following the floods.

An anonymous source close to Nantou Mining told Burkina Faso’s Oméga media that it was their "subcontractor Byrnecut who proceeded to the scrapping of these vehicles which are unfit for circulation". Byrnecut is an Australian company working on the mine.

AFP Fact Check confirmed this on November 17, 2022, with a journalist from national radio RTBF who had witnessed the events seen in the video. "This destruction of vans did indeed take place on the site of the Perkoa mine," said Simon Céphas Bamouni.

"This pick-up breakage was carried out by the subcontractor Byrnecut and not the company Trevali Mining Corporation," he added.

"Despite the arguments put forward by the company to justify the destruction of these vehicles, the local populations considered that this was inhumane. Some residents would have liked these pick-ups to be given to state services or local administrations, instead of tearing them down."

Burkinabe economic journalist Elie Kaboré said there was one key explanation for why the French got blamed in the false posts: “There is a fairly deep anti-French feeling that pushes some people to blame France for everything in this country. France and the French have no connection with this affair."

"France does not operate in the mining sector in Burkina Faso," said who runs mining news website Mines-Actu Burkina Faso.

"Canada, Russia and Australia are the countries whose companies have signed mining conventions with Burkina Faso," he added. “Reports of a nationalisation of mines including the destruction of vans by the French is fake news."

The French ambassador for public diplomacy in Africa, Anne-Sophie Avé, reiterated this on Twitter: "France does not operate any mines, neither in Faso nor in Mali. Zero French Zero French company on the photo or in this construction accident".

The mining sector is one of the pillars of Burkina Faso’s economy, contributing nearly 20 percent of GDP. It is dominated mainly by the extraction of gold and Canadian companies like Limagold in Essakane and Semafo in Mana, according to this French article on the Business and Human Rights Resource Centre website.

The September 30, 2022, coup in Burkina Faso brought about a wave of disinformation and the former colonial power is regularly accused of being responsible for the deterioration of security in the Sahel.

In neighbouring Mali, where relations have also deteriorated sharply, the ruling junta pushed France out after nine years, opting to work – despite denial – with the Russian paramilitary group Wagner.

Numerous rumours on social networks have in the past accused the French of using military intervention in the region to seize natural resources, particularly in mining.

Paris, which intends to continue fighting against jihadist groups linked to Al-Qaeda or the Islamic State group, has reviewed its military approach in the Sahel, which includes around 3,000 soldiers in Niger, Chad and Burkina Faso, down from the 5,500 troops at the height of its deployment.