A photo of a toddler crying while clinging onto a man lying on the ground has been shared on Twitter alongside a claim that it was taken in Ethiopia’s Amhara and Oromia regions. However, this is false: the image shows a Rwandan boy next to his dad who died of cholera in the Democratic Republic of Congo (DRC) in 1994. 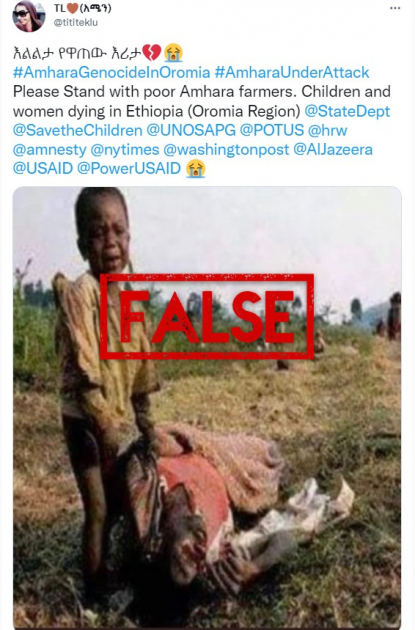 Oromia is Ethiopia’s largest federal state and is home to the Oromo, the country’s biggest ethnic group who have long complained of marginalisation.

Even as rivals in Ethiopia’s Tigray war agreed to a ceasefire on November 2, 2022, reports of fighting and massacres emerged in Oromia, a region haunted by a long-running insurgency.

The ongoing fighting between Ethiopian government troops and the Oromo Liberation Army (OLA) rebels has led to dozens of casualties in the recent weeks.

The conflict, coupled with prolonged drought, has inflicted humanitarian crises in parts of the Oromia and Amhara regions that border each other, according to an October 2022 report by the UN Office of Coordination Humanitarian Affairs. 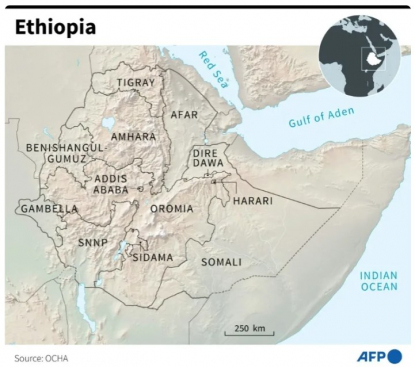 In June 2022, over 400 Amhara civilians were killed in the Oromia region. Eyewitnesses blamed the massacre on OLA, but the rebel group distanced itself from the allegations.

The Amhara people live in Ethiopia’s central highlands and are primarily agriculturists who produce maize, wheat, sorghum, and barley among other crops. They are the second largest ethnic group in the country after the Oromo.

But the image circulating on Twitter was not taken in Ethiopia.

A reverse image search traced the photo to the Getty Images photo archives. According to the caption, it shows a Rwandan toddler crying while clinging to his dead father who died of cholera in 1994 in Zaire, now called the DRC.

“The two had fled the Hutu-Tutsi violence in Rwanda and come to Zaire for safety,” the caption reads. 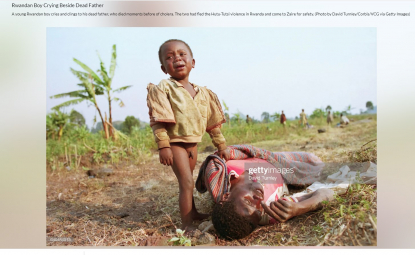 In 1994, Rwandans fled the country in their thousands to find refuge in the eastern part of DRC. The conflict resulted in at least 800,000 deaths in 100 days.

The image is credited to photographer David Turnley who was working for the US newspaper Detroit Free Press.

Turnley is yet to reply to AFP Fact Check’s request for comment.

The image was also published separately in a photo story by the German news site Der Spiegel.