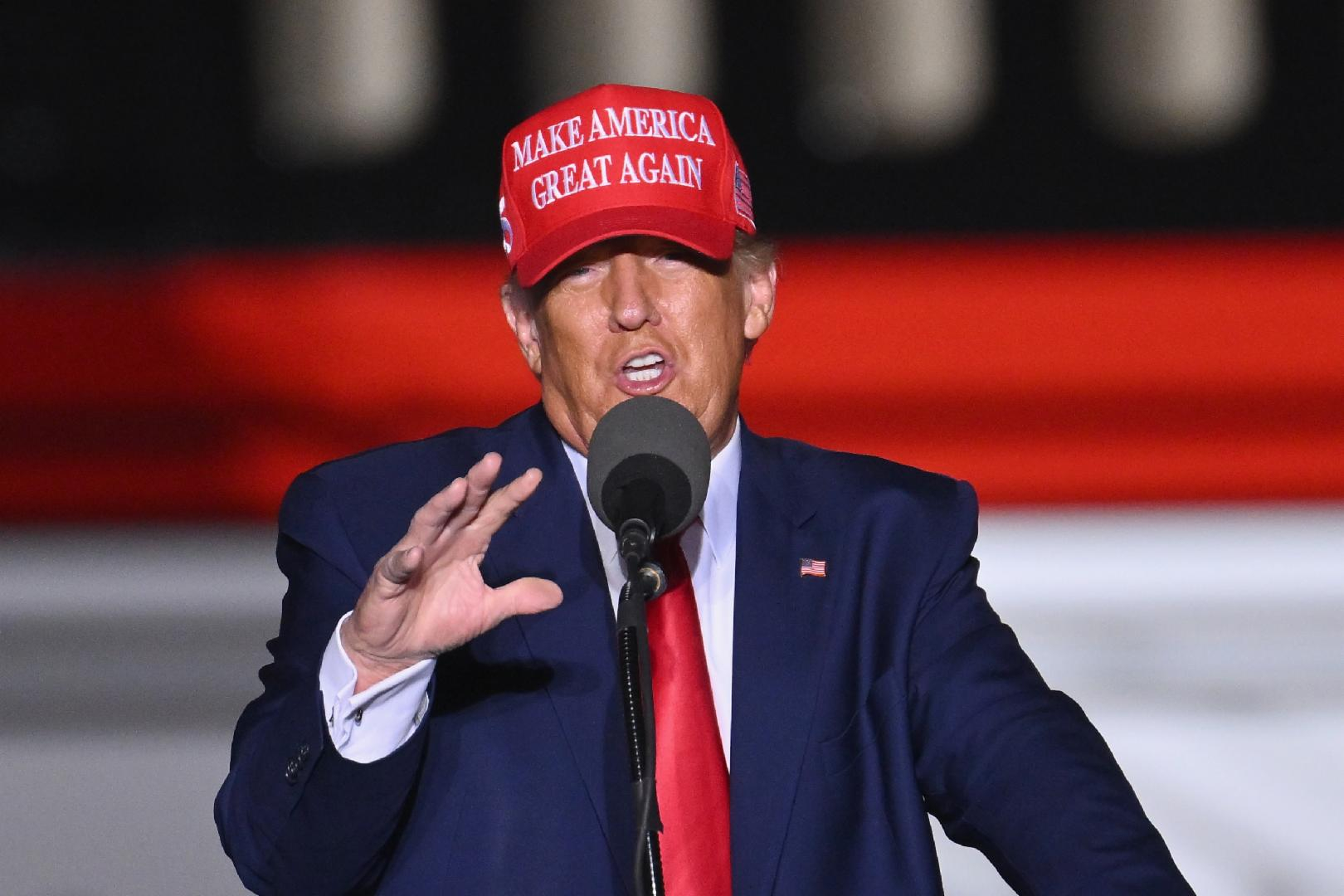 Former US President Donald Trump speaks during a "Save America" rally ahead of the midterm elections at Arnold Palmer Regional Airport in Latrobe, Pennsylvania, on November 5, 2022 ( AFP / ANGELA WEISS)

Former US president Donald Trump claimed in a post on his social media platform that the Pennsylvania Supreme Court ruled the 2020 election was "rigged." This is false; the court ordered in early November 2022 that state officials should not count undated mail-in ballots, or those returned with incorrect dates, in midterm elections that took place November 8.

"So the Pennsylvania Supreme Court just ruled, in effect, that the 2020 Presidential Election was Rigged, but they'll let that result stand, however, in future Elections, you are no longer allowed to do what was done in the 2020 Election," Trump said in a November 3, 2022 post on Truth Social. "Is that fair, or even legal."

He added: "This decision represents far more votes than would have been needed to win Pennsylvania. What a SCAM!" 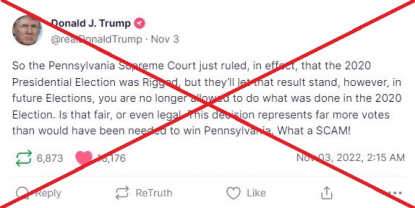 The post was shared thousands of times in the days leading up to Pennsylvania's midterm races, in which Democrat John Fetterman edged out Republican Mehmet Oz, a Trump-backed celebrity doctor, in the state's hotly contested US Senate contest. Doug Mastriano, another Trump-endorsed Republican, also sank in Pennsylvania, losing the governor's race to Democratic challenger Josh Shapiro.

Similar claims have spread across social media platforms and conservative websites since the days leading up to November 8 -- including in Greek. They comprise the latest misinformation to target Pennsylvania, a battleground state that President Joe Biden won by more than 80,000 votes in 2020.

"This claim is untrue," Amy Gulli, director of communications for the Pennsylvania Department of State, said of Trump's post. "The Pennsylvania Supreme Court did not rule that the 2020 presidential election was 'rigged.'"

On November 1, Pennsylvania's high court ordered county officials to "refrain from counting any absentee and mail-in ballots received for the November 8, 2022 general election that are contained in undated or incorrectly dated outer envelopes."

The Pennsylvania Supreme Court said in its ruling: "We hereby direct that the Pennsylvania county boards of elections segregate and preserve any ballots contained in undated or incorrectly dated outer envelopes."

Voters are required to sign and date return envelopes containing absentee ballots in order for them to be counted, according to the Pennsylvania Department of State. Mail-in ballots must also be received by 8 pm (0100 GMT) on Election Day, with an exception for military and overseas voters.

"The court ruled that counties should not count undated ballots. They should set those aside," said John Kincaid, a government professor at Lafayette College in Pennsylvania.

However, the state Supreme Court's ruling sparked confusion among local election administrators who were unsure of how to determine what constitutes an "incorrectly dated" ballot, the Philadelphia Inquirer reported. So on November 5, the high court issued a supplemental order:

That is different from how Pennsylvania tallied mail-in ballots during the 2020 presidential election, when votes received after the deadline were still counted.

"In 2020, the (Pennsylvania) Supreme Court held that that date requirement could not be enforced in that year's election, but would be enforced in the future," said Michael Dimino, a professor and election law expert at Widener University.

It is unlikely that discounting undated or incorrectly dated ballots in 2020 would have made up the vote gap between Trump and Biden in Pennsylvania.

For example, Philadelphia -- the state's most populous city and a Democratic stronghold -- counted roughly 8,300 undated ballots out of about 381,000 votes cast by mail during the election, according to media reports.

Ruling does not prove wrongdoing

While Dimino said Trump "has a point" on the Pennsylvania Supreme Court's about-face on mail-in ballot requirements for the midterms, there is no evidence the 2020 general election was "rigged."

Of the nearly 7,000,000 ballots cast in Pennsylvania for the presidential contest, there have been four confirmed cases of absentee ballot fraud, according to a database maintained by the Heritage Foundation, a conservative think tank.

In a February 2021 press release, the Pennsylvania Secretary of State said the results of a statewide audit -- which examined ballots in 63 out of 67 counties -- "provided strong evidence of the accuracy of the count of votes cast in the November 2020 presidential election."

"The results of the sample mirrored the reported presidential election results across the participating counties within a fraction of a percentage point," the release said.

Courts rejected dozens of lawsuits filed by Trump and his allies to challenge the outcome of the 2020 election in several battleground states -- including Pennsylvania. Officials from both parties, including Trump's own attorney general, William Barr, have repeatedly quashed claims of widespread fraud.

The US Cybersecurity and Infrastructure Security Agency said in a November 2020 statement that the general election was "the most secure in American history."