Social media users claim a video shows a poll worker in Pennsylvania committing fraud during the 2022 US midterm elections. This is false; the clip is of a Delaware County official legitimately transcribing damaged ballots in the presence of bipartisan observers during America's 2020 presidential election. 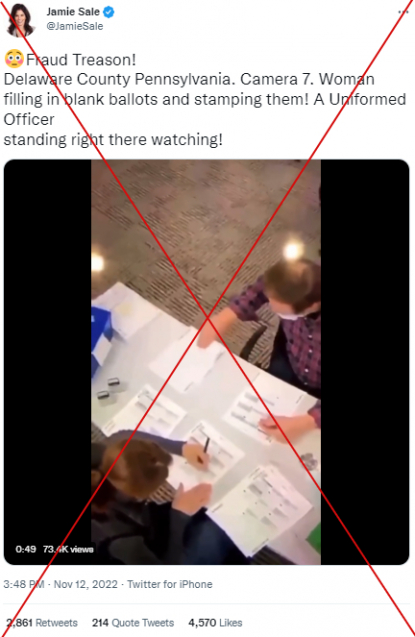 The claim also circulated on Instagram and Rumble, adding to a steady stream of misinformation about election fraud in the midterms.

However, the video shared online shows poll workers in Delaware County, Pennsylvania two years ago during the presidential contest. It does not depict fraud, despite claims that have circulated online since 2020.

The footage comes from a Delaware County livestream of ballot-counting during the 2020 election. The images and clips shared online have been zoomed in and cropped to isolate a single poll worker.

The posts are part of a trend in which livestream footage is manipulated to promote claims of fraud, as Delaware County explained in a November 6, 2020 press release.

A similar video that circulated online after the presidential election showed "an election worker, seemingly alone at a table, marking a ballot" -- when in fact the room was "full of people with bipartisan observers a few feet away at each end of the table," the county said.

Christine Reuther, a member of the Delaware County Council and a liaison to the Bureau of Elections, told AFP the poll worker shown in the more recent posts was transposing damaged and unreadable ballots -- a standard election process. 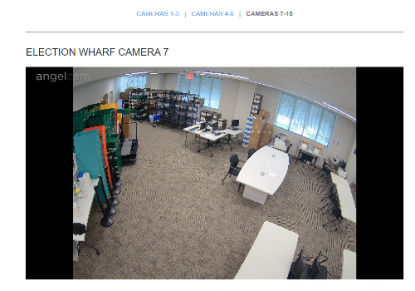 This November 17, 2022 screenshot of Delaware County, Pennsylvania's 2020 election livestream shows the same tables and carpet as those seen in a video circulating online

The votes are transcribed to clean ballots and scanned under the supervision of bipartisan observers, she said. Damaged ballots are then preserved for security reasons.

"Nobody is sitting there in full view filling out ballots," Reuther said, adding that there have been no documented cases of fraud in the 2022 election.

Adrienne Marofsky, public relations director for Delaware County, agreed: "There are established practices across the nation for properly replacing damaged ballots so that they may be scanned."

She confirmed to AFP that the video had been misleadingly cropped out to isolate the subject.

"Voters do not always submit ballots that can be accurately interpreted by a ballot scanner due to issues, such as damage, misprinting and/or ambiguous markings on the ballot," the agency says on its website. "Election officials apply the jurisdiction’s rules for determining voter intent regarding the marks on such ballots and capture the ballots' valid votes in election results via varying electronic and/or manual processes."

No evidence of fraud in midterms

Delaware County has been the subject of several lawsuits regarding claims of widespread election fraud, all of which were dismissed as unfounded in court. Only one verified case of illegal activity -- involving a man who voted for Donald Trump on behalf of his dead mother -- has surfaced since the 2020 election.

There is no evidence of widespread malfeasance affecting the 2022 midterms, either.

CISA said in a November 9 statement: "We have seen no evidence that any voting system deleted or lost votes, changed votes, or was any way compromised in any race in the country."