Photo shows Martyrs' Day in West Bengal in 2017, not an election rally in Gujarat in 2022

An old image of a massive crowd has been shared hundreds of times in Twitter and Facebook posts that falsely claim it shows a rally staged by an Indian opposition party ahead of the state elections in Gujarat state. In reality, the image was shot in West Bengal and shows the massive crowd that attended the state's annual Martyrs' Day commemoration in 2017.

The image has been retweeted more than 160 times after it was shared with the false claim here on Twitter on November 11.

The post's Hindi-language caption translates to English as: "Gopal Italia files his nomination along with a large number of supporters at a road show with Raghav Chadha. This image proves people of Gujarat want a change." 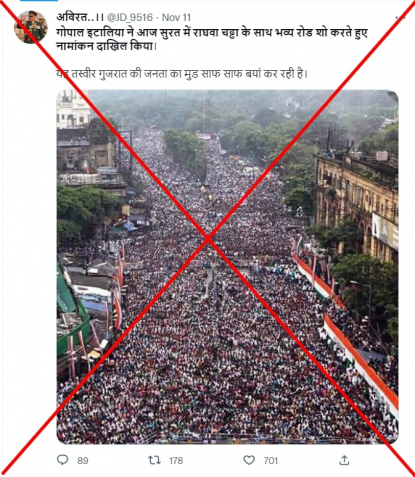 A screenshot of the misleading post captured on November 15, 2022

Chadha led the event with the AAP's Gujarat president Gopal Italia before the latter filed nominations for the upcoming elections in the state currently ruled by the Hindu nationalist Bharatiya Janata Party (BJP).

The image, however, is old. It was taken in West Bengal's capital Kolkata -- not in Gujarat's Surat city.

A reverse search on Yandex found the image published here by the Indian news organisation The Quint on July 22, 2017.

The report states the image was taken during a Martyrs' Day rally in Kolkata.

The report reads: "Every year on 21 July, the Martyr's Day Rally is held in Kolkata in remembrance of the police firing which took place on that day in 1993, causing the death of at least 13 members of the Indian Youth Congress (IYC).

"On that day, 24 years ago, Banerjee, had led the IYC's Bengal unit to the State Secretariat, rallying for photo voter identity cards to be made compulsory to ensure fair elections. However, the Kolkata police had intercepted the party about a kilometre away from the Secretariat, at Kolkata's Esplanade area and opened fire."

Banerjee posted the image alongside other photos of the event here on Twitter on July 21, 2017.

Below is a screenshot comparison of the image in one of the false posts (left) with the photo in the Quint's report (right). 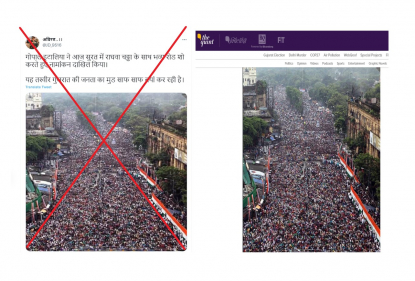 A slightly similar photo showing the same scene with a fuller view of the avenue was shared by parliament member Abhishek Banerjee here on Twitter on July 21, 2017.

The location shown in the image corresponds to Google Street View imagery of this avenue in Kolkata:

Below is a screenshot comparison of the image shared by Abhishek Banerjee (left) and its location on Google Maps (right) with similar elements highlighted: