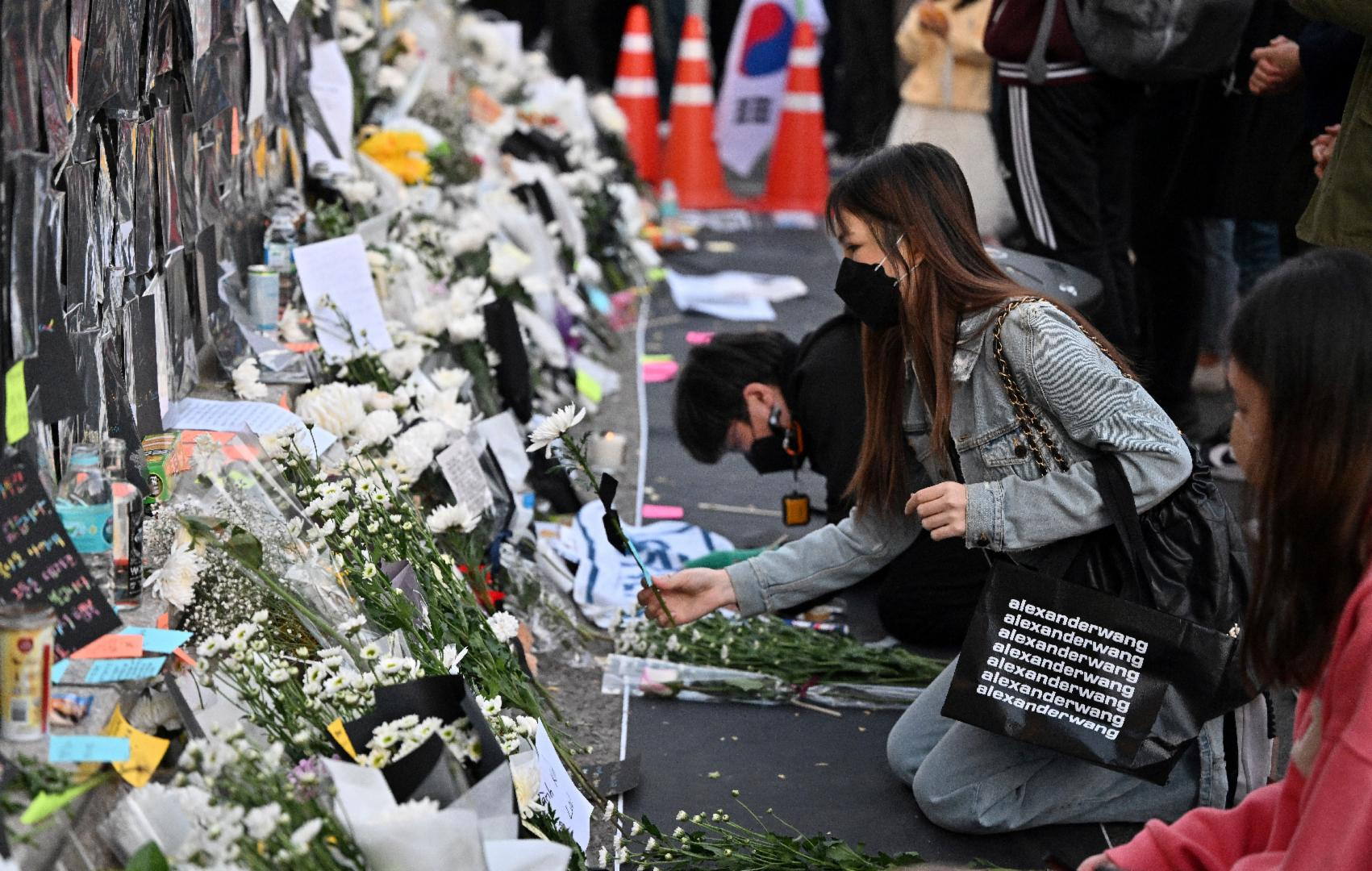 Mourners pay tribute at a makeshift memorial for the victims of the deadly Halloween crowd surge, outside a subway station in the district of Itaewon in Seoul on November 1, 2022. ( AFP / JUNG YEON-JE)

Korean-language social media posts shared a fortnight after a deadly crowd crush in Seoul's Itaewon district misleadingly claim that the South Korean government has decided to give more than one billion won ($746,000) in compensation to each of the victims' families. The posts said the sum was comparable to the compensation given to families of those killed in the 2014 Sewol ferry disaster. A South Korean presidential spokesperson told AFP that it had not made a decision on compensation for families of the Itaewon victims, adding that a police investigation into the accident remained ongoing. The compensation given to the families of the Sewol ferry disaster victims was also less than the misleading posts claimed.

The claim was shared in a graphic posted on Facebook here on November 13, 2022.

It shows a photo of emergency personnel tending to victims of the crowd crush on October 29, 2022 in Seoul's Itaewon entertainment district.

Local media reported on November 14 that the death toll from the disaster had risen to 158 after a woman in her 20s died.

The Korean-language caption underneath the photo translates as, "Compensation money for families of Itaewon victims. (The government) already decided that they will receive a sum similar to (that given to families of) Sewol ferry victims.

"Since 800 million won was given to the Sewol families, taking into account market price increases, (Itaewon victims’ families) will be given a sum of a little over one billion won by the government." 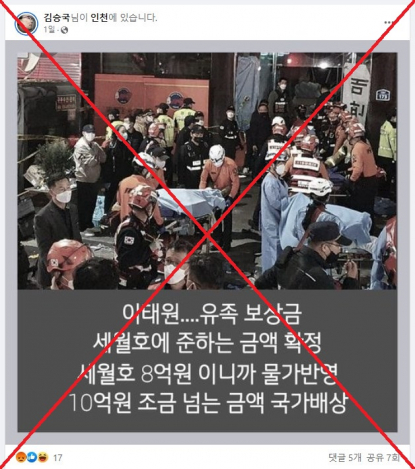 Screenshot of the misleading claim shared on Facebook, captured on November 15, 2022

The post refers to the Sewol ferry disaster in April 2014 off South Korea's southwestern coast that killed 304 people.

The vessel took hours to sink off the country's southwest coast in April 2014, killing more than 300 people in one of the country's worst maritime disasters.

In response to the posts, a South Korean presidential office spokesperson told AFP the claim was "untrue and lacks any basis."

Local media reported on November 16 that a special police investigation remained underway into the causes of the disaster and whether it could have been prevented.

A presidential spokesperson told AFP on November 15 that it was "customary" for the presidential office to examine legal frameworks for possible compensation following major incidents, but added that "any decisions on compensation can only be made once the official investigation into the (Itaewon) accident is concluded."

"We can say at this point there has been no decision made on compensation," the spokesperson said.

According to local media reports published here and here on November 14, a presidential spokesperson told reporters that the government was looking into a legal framework to compensate victims' families of the Itaewon crowd crush.

This followed comments made by President Yoon Seok-yeol on November 10 about "sufficient compensation and condolatory payments" pending an official investigation.

Based on a law on state compensation, victims' families may be liable to receive compensation from the government if negligence is proven on the part of public officials who responded to the disaster, or if it is ruled that they failed to prevent it.

Local media reported here and here that some victims' families were preparing class-action lawsuits against the government following the disaster.

Separate from compensation, the government announced on October 31 that it would provide 20 million won ($15,000) to victims' families as a "consolation benefit", in addition to up to 15 million won ($11,000) to cover funeral fees and other auxiliary costs.

Based on South Korean government data, the posts also falsely claimed 800 million won was given to each of the families of the victims of the Sewol ferry disaster.

Of the 304 people killed, 250 were students and 11 were teachers from Danwon High School.

With regards to families of the other passengers killed in the accident, compensation "showed a large deviation based on the income and age of the (victim)," the report read.

The compensation was handed out after a special act was passed in South Korea's legislature in January 2015, local media reported.

The compensation given to the families of the ferry disaster victims has previously been the subject of misinformation, according to local reports here and here.