Meghan Markle photo spreads out of context after queen's death

Social media users are claiming Duchess of Sussex Meghan Markle copied a look from the late Princess Diana after Queen Elizabeth II's death. But the photo shared in the posts is old; it was taken at a 2019 Remembrance Day ceremony, and her outfit respected the customary dress code for the 1918 armistice commemoration.

"People are saying Meghan is a baddie for this," says a September 12, 2022 tweet. "Does anyone else think dressing up as your husband's dead mom for a funeral is weird?"

The post includes a photo montage of Markle and Diana wearing black coats and hats. Similar tweets accumulated thousands of shares on Twitter within days of the queen's death September 8, 2022.

"I am here for this level of petty," says another September 12 tweet with #QueenElizabeth. 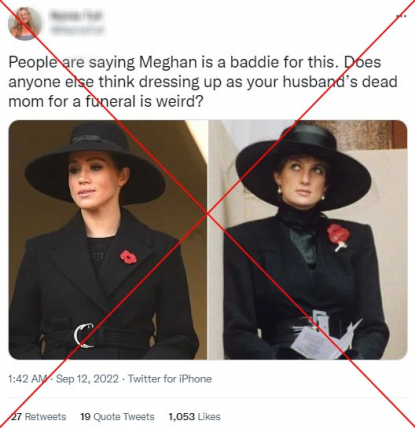 But a reverse image search shows the photo of Markle was taken during a Remembrance Day ceremony on November 11, 2019, as seen in the AFP photo below. 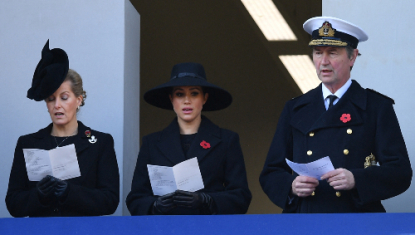 Jessica Storoschuk, historian and author of a blog on the British royal family, told AFP that Diana and Markle are both seen wearing a poppy "to honor veterans and those who did not return" from World War I.

"In Britain, Canada, and elsewhere, this would be immediately understood in the context of Remembrance Day," she said.

"By dressing in a simple black belted overcoat adorned with a single red poppy, both women attempted to shift emphasis away from themselves and toward the central focus of the solemn occasion: commemorating the anniversary of the 1918 armistice," she said.

Other royal women have been photographed in similar looks on other Remembrance Days. Below is an image of Princess Catherine wearing black with a red poppy in 2021. 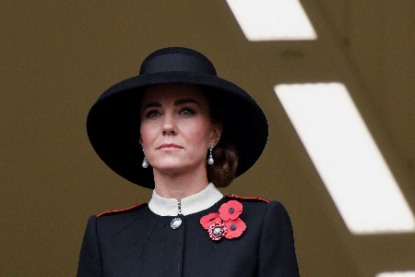 Catherine, then-Duchess of Cambridge, attends the Remembrance Sunday ceremony at the Cenotaph on Whitehall in central London, on November 14, 2021

For the funeral of Queen Elizabeth II, which took place September 19, women in the royal family wore "what was expected" of them, Storoschuk said: a black dress or coat to the knee or longer, with a black hat and black tights.

Markle appeared in black at several public ceremonies to bid adieu to the queen. 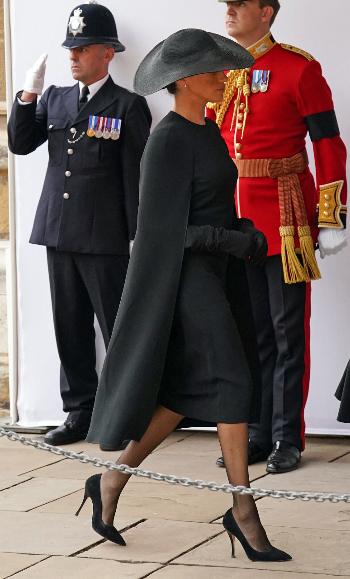 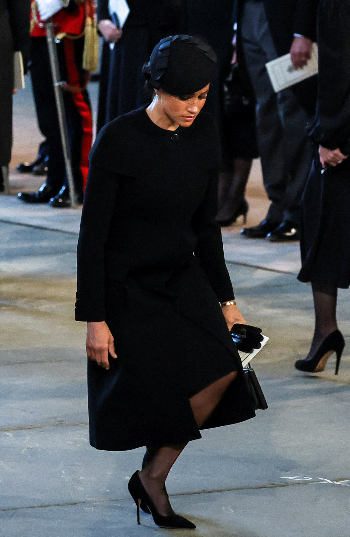 Meghan, Duchess of Sussex pays her respects inside Westminster Hall, at the Palace of Westminster, where the coffin of Queen Elizabeth II will lie in state on September 14, 2022 ( POOL / AFP / Alkis Konstantinidis)

On September 10, King Charles III's sons William and Harry also made a public appearance accompanied by their spouses to salute the crowds gathered in front of Windsor Castle, as seen in the photo below. 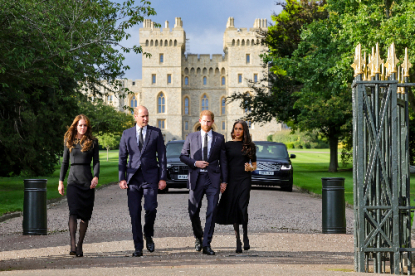 Harry and his wife have been under intense media scrutiny since early 2020, when they quit their royal duties and moved to Los Angeles. The couple's interview with Oprah Winfrey in March 2021, as well as their lucrative deals with streaming platforms such as Spotify and AppleTV, only heightened such attention.

"Members of the royal family, and women in particular, face intense media scrutiny and therefore take great care with their clothing and jewelry choices," she said. "As the only person of African descent to marry into the royal family, Meghan has faced an unprecedented level of negative criticism about her fashion choices -- regardless of how carefully she selects her outfits."