A video has been viewed thousands of times in social media posts that claim it shows gunmen attacking a family in Pakistan's megacity Karachi. However, the video has been shared in a false context; it shows a shooting in Ecuador in May 2022.

"Blind firing on a family at Redapple and Baloch Icecream in Gulistan-e-Johar. The father lost his life. No one is safe in Karachi," reads an Urdu-language tweet posted on September 10, 2022.

The 20-second video, which has garnered more than 6,500 views, shows two men wearing black baseball caps approach a car and open fire. A woman and child inside the vehicle huddle together during the shooting, before the attackers flee. 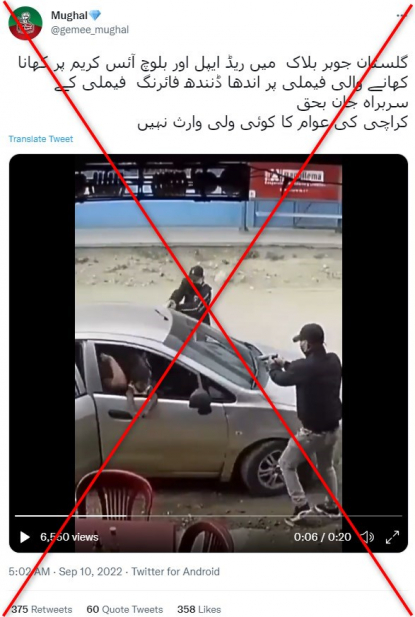 Redapple Johar restaurant and Baloch Icecream cafe are located in Gulistan-e-Johar, a neighbourhood in Karachi, the capital of Pakistan's Sindh province.

The video has been viewed more than 2,200 times after it was shared in similar posts on Twitter here and here, as well as on Facebook here.

The posts circulated as Sindh police chief Ghulam Nabi Memon called an emergency meeting over a rise in street crime in Karachi, the most populous Pakistani city.

However, the video has been shared in false context.

A reverse image search and keyword search found footage of the shooting in a tweet by Metro Ecuador newspaper on May 13, 2022.

The 28-second clip shows the attack from a wider angle.

The Spanish-language tweet reads: "A business owner was shot inside his car while he was with his family in Santa Elena."

Below is a screenshot comparison of the video in the misleading post (left) and the genuine video in Metro Ecuador's tweet (right).

El Universo, another newspaper in Ecuador, published a screenshot of the footage in a report which said the attack happened on May 12, 2022, in the 25 de Septiembre neighbourhood of La Libertad, a town in Santa Elena province.

"Terror gripped the inhabitants of the 25 de Septiembre neighbourhood in the town of La Libertad on Thursday afternoon," the Spanish-language report reads.

"A man in a grey vehicle parked outside a restaurant with his wife and daughter was shot by suspected hit men."

El Universo newspaper later reported that the man succumbed to his injuries.

A representative for the public prosecutor's office in Ecuador told AFP that the attack in the video happened at the 25 de Septiembre market in La Libertad.

Karachi police also tweeted a statement denying the "fake videos" were filmed in the Pakistani city.