A video has been viewed tens of thousands of times in social media posts in Sri Lanka alongside a claim it shows "paralytic pills" found inside a "new cake product". The claim, however, is false. A spokesperson for Sri Lanka Customs told AFP that the product is not imported to the island nation. The product's manufacturer told AFP the claim is "baseless", adding that it had initiated legal action in Iraq in relation to the original video shared in 2019.

It appears to show someone unwrapping a packaged cake labelled "Luppo", before finding what seem to be white pills inside the sponge.

Luppo is a brand name for a cake snack produced by Şölen, an Istanbul-based snacks manufacturer.

The video's Sinhala-language caption translates to English as: "There is a new cake product available on the market right now.

"The company called 'Luppo' sells a product containing a tablet that can paralyse your children. Please share this with your friends and keep an eye on your children and yourself." 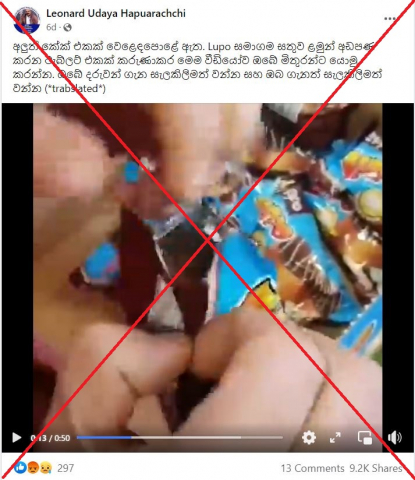 A spokesperson at the Sri Lanka Customs said that products from Şölen, including Luppo, are not imported to the island nation.

"No such company is listed as an importer to Sri Lanka," the spokesperson told AFP on September 8.

Oktay Dogan, Şölen's regional export manager, also told AFP that the company is not exporting its products to Sri Lanka and the claim about paralytic pills being hidden inside its cakes is "baseless".

Dogan added: "The video in question has been made for the sole purpose of defamation, and it is entirely baseless.

"Since the posts circulated online in 2019, Şölen has meticulously pursued the matter and even initiated legal action in Iraq where the misleading posts originated."

The video -- which has circulated online since at least 2019 -- has been debunked by multiple fact-checking organisations.

Turkish media site Teyit reported in November 2019: "No findings were found in the laboratory results of independent inspectors for Şölen Chocolate [the product seen in the misleading posts]."

Separate keyword searches on Google found the laboratory results cited by Teyit published here on the website of the British Retail Consortium (BRC), a trade association for retail businesses in the United Kingdom.

The results show that the laboratory test on the product – conducted by SGS United Kingdom – scored the highest possible grade in the Brand Reputation through Compliance of Global Standards (BRCGS) grading system.