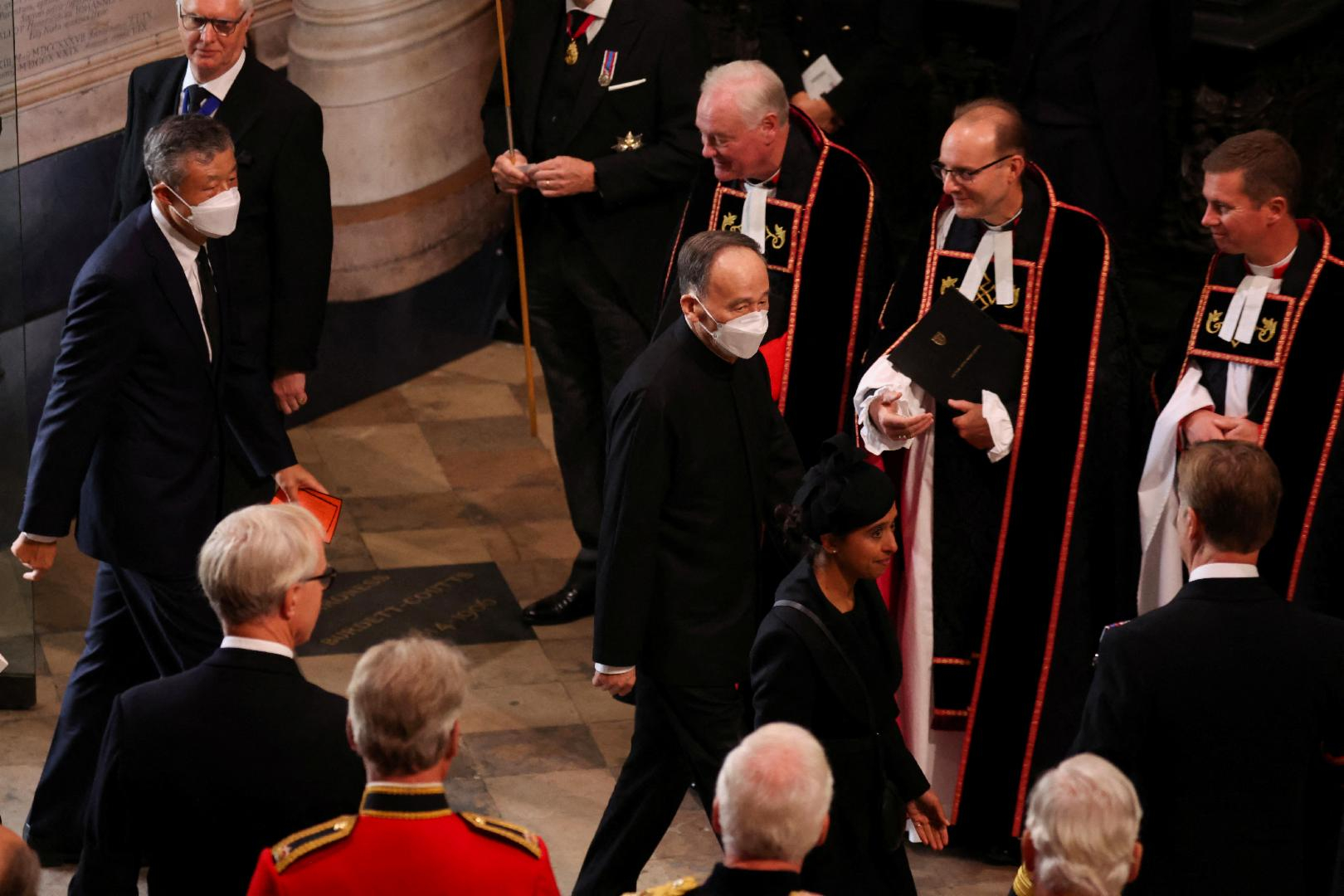 Chinese social media posts shared hundreds of times ahead of the funeral for Britain's Queen Elizabeth II suggested that China was among the countries whose officials were not invited to the ceremony at Westminster Abbey. This is false. Photos show Chinese Vice President Wang Qishan at the ceremony in London following the UK government's invitation.

The claim was published on Twitter here on September 15, 2022. It was shared more than 400 times.

The post suggests that this Chinese-language blog post failed to report China was not invited to Queen Elizabeth II's funeral along with Russia, Belarus and Myanmar.

It shows a screenshot of a Chinese news article that is headlined, "Countries not invited to UK Queen's funeral confirmed: Russia, Belarus and Myanmar etc!"

The simplified-Chinese caption reads: "Once again, China got left out [from the invitation], protest against this."

Text superimposed on the photo suggests that China was reduced to "etc" in the Chinese report's headline. It translates as: "The country you put as etc is that country, such a shame."

"The 'etc' is referring to that country you are thinking of." 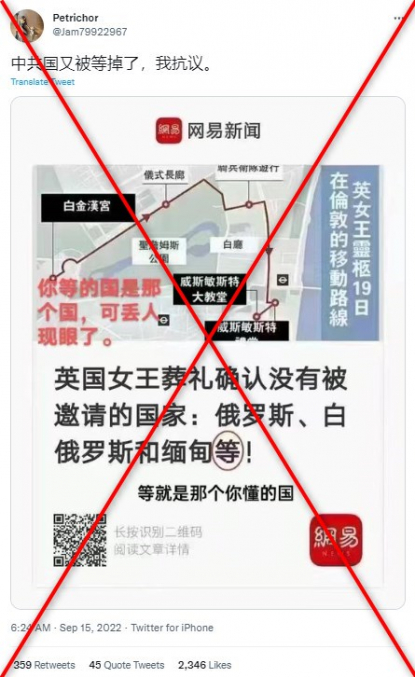 Queen Elizabeth II, the longest-serving monarch in British history, died on September 8 at Balmoral, her Scottish retreat in rural Aberdeenshire, at the age of 96.

Hundreds of foreign royals and leaders attended the queen's funeral in London on September 19, making it one of the biggest diplomatic gatherings in decades, AFP reported.

Russia and Belarus were among a small group of nations to be excluded from the funeral following Moscow's invasion of Ukraine, a British government source told AFP.

The claim that China was also not invited to the ceremony in London was shared hundreds of times in other posts on Twitter and Gettr.

"It seems like they can't even be bothered to mention that name... because it could easily lead to humiliating China," one commented.

Another wrote: "Haha so my China doesn't even deserve a name?"

Beijing's foreign ministry confirmed that Vice President Wang Qishan would attend the funeral on behalf of President Xi Jinping, as reported by AFP.

"At the invitation of the UK government, President Xi Jinping's Special Representative Vice President Wang Qishan will attend the funeral of Queen Elizabeth II to be held in London on September 19," the statement on September 17 read.

A photo of Wang attending the ceremony at Westminster Abbey was published here and here by AFP on September 19. He can be seen walking in front of Liu Xiaoming, the former Chinese Ambassador to the United Kingdom. 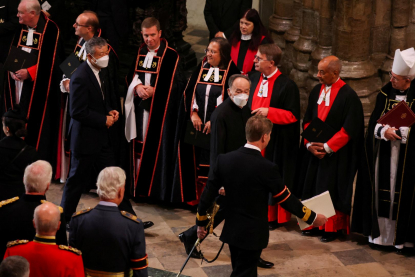 Although Chinese President Xi Jinping did not attend the funeral in London, he offered his "sincere sympathies to the British government and people" following the queen's death.

An official delegation from China was reportedly banned from attending the lying in state following an intervention by House of Commons Speaker Lindsay Hoyle, parliamentary sources told AFP.

The snub followed China's sanctioning of several British lawmakers over their criticism of its human rights record -- and prompted a rebuke from foreign ministry spokesperson Mao Ning, who said at a press briefing on September 16 that the UK "should uphold both diplomatic courtesy and gracious hospitality".

However, Wang was photographed visiting the lying in state of Queen Elizabeth on September 18, after House of Commons officials said any heads of state or representatives invited to the funeral could also visit the late monarch's coffin in Westminster Hall.

AFP has fact-checked other misinformation about the queen's death here, here and here.