Social media posts claim a video shows a group of Irish dancers performing outside Buckingham Palace after Queen Elizabeth II's death in early September 2022. This is false; the clip was first published on TikTok in January 2022.

The post includes a video with more than one million views. It shows a group of five Irish dancers performing to the Queen song "Another One Bites the Dust" in front of Buckingham Palace in London. 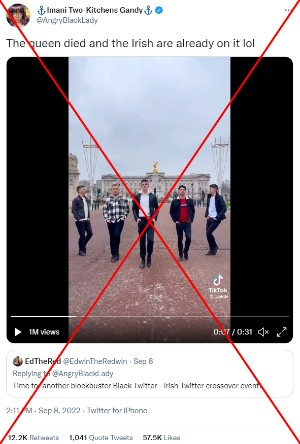 Queen Elizabeth II, the longest-serving monarch in British history, died September 8 at her Scottish Highland retreat. She was 96 years old.

The announcement of the queen's death was followed by the cancellation of major sporting and cultural events and a public address from her successor, King Charles III. Footage of widespread grieving has been shared across the internet.

But the video featuring the Irish dancers was posted before the queen's death.

The clip was originally published January 18, 2022 on TikTok by a group called Cairde. The dance troupe, which has more than 3.1 million followers on the platform, regularly films in front of historical landmarks.

AFP reached out to Cairde for comment, but a response was not available at time of publication.