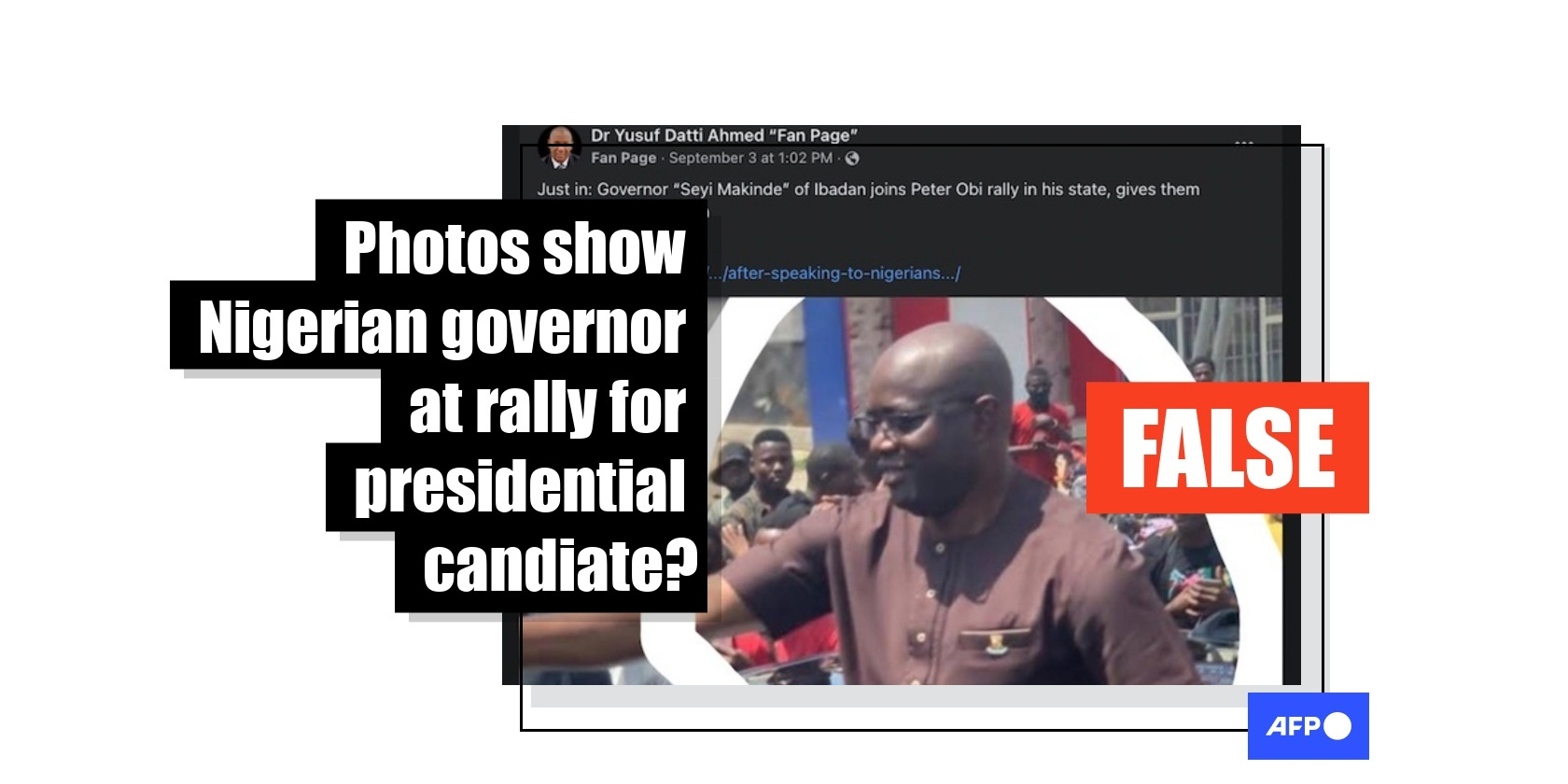 Nigerian governor pictured at protest in 2021, not at rally for Labour Party’s Peter Obi

Supporters of Nigerian presidential candidate Peter Obi have been staging marches across the country as election fever ramps up ahead of national polls set for February and March 2023. Several Facebook accounts have shared photos with claims that they show the governor of Oyo state, Seyi Makinde, attending a pro-Obi rally in the capital city of Ibadan on September 3, 2022. The authors of the posts also allege he provided security at the event. But the claims are false: the images of Makinde were shot at an anti-government march in 2021 while a separate photo of armed security officials was taken in 2019. Neither Makinde nor Obi attended the gathering in Ibadan.

“Governor ‘Seyi Makinde’ of Ibadan joins Peter Obi rally in his state, gives them security to guide them,” reads a post shared on September 3, 2022. 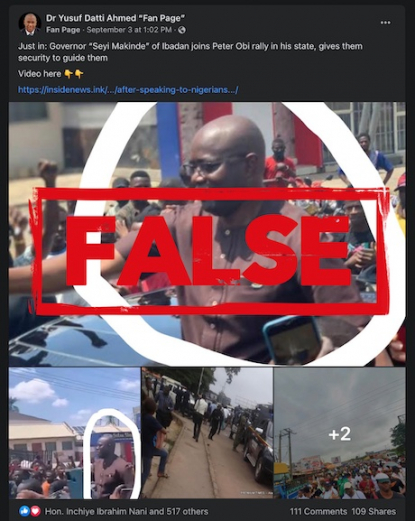 The post contains at least two photos of Makinde waving to a crowd from an open-roof car. Other pictures show armed security officials and crowds.

The Facebook account responsible for the post labels itself as a fan page of Obi’s running mate, Yusuf Baba-Ahmed. It has a history of sharing false information and has been the subject of a debunk by AFP Fact Check in the past.

With more than 40,000 followers, the page publishes content mostly about Obi.

Obi belonged to the opposition People’s Democratic Party (PDP) until his resignation on May 24, 2022. Makinde is still a party member.

Other accounts shared the same pictures and captions (here and here).

But the claim that Makinde attended the rally for Obi is false.

AFP Fact Check conducted reverse image searches and found one of the pictures of Makinde was published on June 12, 2021, by Nigerian news website Daily Post. 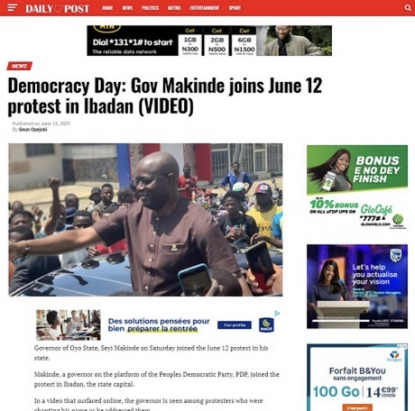 A screenshot showing the photo of Makinde published by Daily Post, taken on September 6, 2022

The Daily Post said the photo was taken at the 2021 Democracy Day rally held to protest the “current state of affairs” in the country.

A YouTube channel called GoldMyne TV published a video from the same event.

The video shows Makinde in the same clothes and car as seen in the false post. Another matching landmark is a shop painted white and red visible in the background.

The Nigerian government declared June 12 Democracy Day, a national holiday in honour of Moshood Abiola, who won the annulled presidential election of June 12, 1993. Abiola died in 1998.

Makinde’s presence at the protest caused controversy, with the Socialist Party of Nigeria accusing him of not being “genuine”.

Concerning the rally in Ibadan, Makinde’s spokesman Taiwo Adisa said the governor was not in Nigeria on September 3, 2022.

Local media reported that Makinde was in London at the time where he held a meeting with other PDP governors.

“For the avoidance of doubt, Governor Makinde was nowhere near Ibadan when the said rally was held,” Adisa said.

Meanwhile, Obi was in the United States on the day of the Ibadan gathering.

Another reverse image search conducted on the photo of the security officials in the false post showed that an earlier version was published on August 5, 2019, by Premium Times. 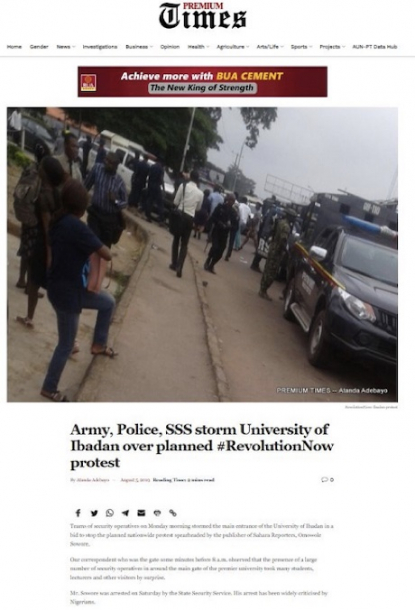 A screenshot of the Premium Times report, taken on September 6, 2022

The report explained that the security officers were stationed at the gate of the University of Ibadan ahead of a planned rally to protest the arrest of the publisher of Sahara Reporters, Yele Sowore. Nigeria’s secret police arrested Sowore in Lagos on August 3, 2019.

Sowore is contesting the 2023 presidential election as a candidate for the African Action Congress.