Social media posts in Nigeria are sharing an image of a group of armed officers alongside a claim that the country’s secret service had besieged the home of Yusuf Datti Baba-Ahmed, the Labour Party’s pick as deputy to presidential candidate Peter Obi. However, the image was actually taken in 2018 when armed agents from the Department of State Services (DSS) blockaded parliament in the capital Abuja. There is also no evidence they recently surrounded Baba-Ahmed’s home.

“My house has been surrendered by DSS from Abuja on the order of Buhari and Tinubu, I am yet to know my crimes (sic),” reads a post shared on August 4, 2022, by a Facebook account called “Dr Yusuf Datti Ahmed ‘Fan Page’”.

“The world should know that Buhari is planning a dictatorship game in an election that is not yet time,” the post continues. “My crimes are backing Peter Obi for a better Nigeria, and we would stop at nothing to achieve that.” 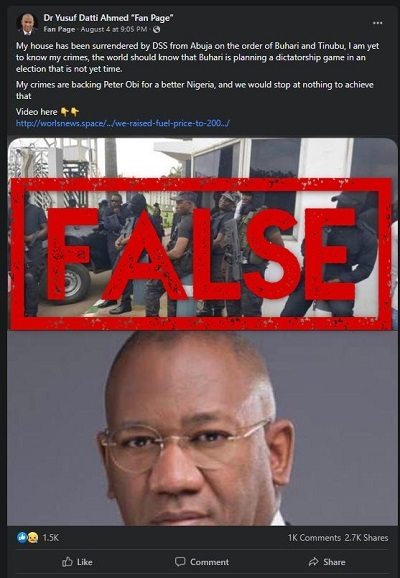 The post has been shared more than 2,700 times and includes two images; one of a team of DSS members outside a building and the other of Baba-Ahmed.

With more than 34,500 followers, the account has shared content that either is critical of the ruling All Progressives Congress (APC), President Muhammadu Buhari, and APC presidential candidate Bola Tinubu or promotes Obi and his Labour Party.

The same claim about DSS purportedly laying siege to Baba-Ahmed’s home was also published by other Facebook accounts (here and here).

However, the image of the DSS team has been used out of context.

AFP Fact Check conducted a reverse image search and found the photo was published by Nigerian newspaper The Guardian four years ago, on August 8, 2018.

The caption indicates that the picture shows the blockade of Nigeria’s National Assembly complex in Abuja by staff from DSS, which is responsible for the protection of the country’s internal security against crimes such as terrorism and espionage. 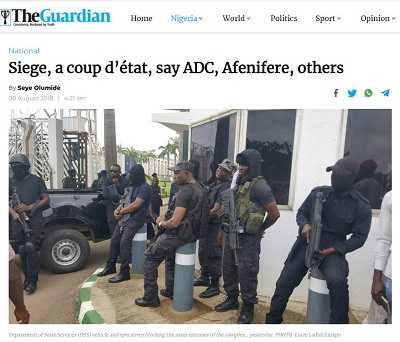 A screenshot of the picture published by The Guardian, taken on August 9, 2022 ( Tonye BAKARE)

Photographer Lucie Ladidi Elukpo, credited for the image, confirmed to AFP Fact Check on August 9, 2022, that she took the picture.

The newspaper also published a picture of a lawmaker prevented from entering the complex by the same DSS agents.

Several other Nigerian newspapers reported on the DSS action, which happened when Buhari went to London for medical reasons. Vice President Yemi Osinbajo, who was acting as president, sacked the former director general of DSS Lawal Daura.

Some of the misleading posts also include a link, which they imply leads to a video.

Some of the misleading posts' texts also share a link, which they imply leads to a video.

However, the link only leads to an error page. The URL's preview starts with "we-raised-fuel-price-to-200-naira", which is the same text used in a different claim about Nigeria's information minister that was debunked by fact-checking organisation Africa Check in July.

No reports of siege on Baba-Ahmed's home

There was no mention of the claim by Baba-Ahmed or the Labour Party on social media.

Approached for comment about the posts, DSS spokesman Peter Afunanya said the claim that Baba-Ahmed was harassed by them was in the “imagination of mischief makers and desperate politicians.”

The Labour Party’s campaign spokesperson, Doyin Okupe, did not respond to requests for comment.