After Australia’s Prime Minister Anthony Albanese outlined a draft referendum question on whether to set up a consultative Indigenous body to parliament, social media users shared a claim that this would also lead to Australians losing their private property rights. The claim is false. Legal experts told AFP that the Indigenous body -- or "voice" -- would have neither the power to pass laws nor take away property.

"Did you know, Under the Native Title Act, aborigines have no private property rights. Under the Uluru Voice, neither will you…#SayNo", reads a Facebook post shared on August 3, 2022.

The post -- which was shared over 580 times -- was published by Josephine Cashman, who ran as a One Nation party candidate in the New South Wales seat of Lyne in May. 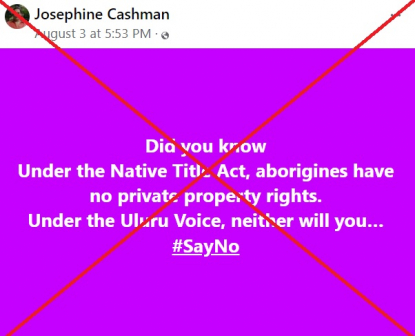 Cashman's post came after Australia's Prime Minister Anthony Albanese outlined a draft referendum question in a bid to change the country's constitution to set up a consultative Indigenous body in parliament.

The constitution does not currently recognise Indigenous peoples, and the move to enshrine a so-called "Indigenous Voice" -- which would advise the government on decisions that affect them -- would require a nationwide referendum.

Albanese had promised to hold a referendum vote before his term ends in 2025, but the One Nation party announced on August 5 it would spearhead a "no" vote campaign in response.

Legal experts told AFP it was false to claim the establishment of an Indigenous Voice in parliament would take away private property rights.

"The Indigenous Voice does not have the power to pass laws." Australian National University law professor Ron Levy told AFP.

"Only a parliament could pass laws to take away property."

University of New South Wales law lecturer Paul Kildea told AFP that the proposed Voice aims to help Aboriginal and Torres Strait Islander peoples have a say over laws and policies that affect their lives.

"It will have no law-making powers and will be unable to direct the parliament or government to take actions of any kind," he added.

The draft text for the constitutional amendment states the Indigenous Voice "may make representations to Parliament and the Executive Government" on related matters, but only parliament has the power to make laws.

Experts also said it is false to suggest that, under the Native Title Act, Indigenous peoples do not have private property rights.

The Native Title Act was passed by the Australian parliament in 1993 and recognises "the rights and interests of Aboriginal and Torres Strait Islander people in land and waters according to their traditional laws and customs", according to a native title information website managed by the Australian Institute of Aboriginal and Torres Strait Islander Studies (AIATSIS).

Native title is often described as a bundle of rights. "These rights may include the right to camp, hunt, use water, hold meetings, perform the ceremony and protect cultural sites," according to the AIATSIS website.

He said native title "is not a private property right but a communal right of Aboriginal and Torres Strait Islander people to an area of land".

The idea for an Indigenous Voice in parliament comes from the Uluru Statement from the Heart, which was passed during the First Nations National Constitutional Convention in Uluru on May 26, 2017.

The statement called for the establishment of "a 'First Nations Voice' in the Australian Constitution and a 'Makarrata Commission' to supervise a process of 'agreement-making' and 'truth-telling' between governments and Aboriginal and Torres Strait Islander peoples."

After his victory in the May 2022 Australian federal election, Albanese said he was committed to the statement.

According to The Sydney Morning Herald newspaper, details about the proposed referendum will be hammered out in parliament before being put to a vote.

"The comments you have seen are pretty nonsensical (from a legal framing), which makes it difficult to respond," Monash University law lecturer Katie O'Bryan said.

She said people sharing the claim either did not understand or were uninformed about native title and the Indigenous Voice's inclusion in parliament.

Dean Parkin, director of the From the Heart campaign, told AFP that fabrications and false claims will likely spread online as the referendum draws nearer.

He encouraged people to refer to reliable sources to learn the Indigenous Voice is about "giving Aboriginal and Torres Strait Islander people a say over laws and policies that affect them".