A photo has been shared in multiple Facebook and blog posts alongside a claim that it shows an accident at a wedding that "killed 70 people in China's Fujian province". The claim is false; the image shows the aftermath of a storm that destroyed a wedding tent and houses in Indonesia in March 2019. No casualties were reported in the incident.

'Sad news.. A Wedding Turned Into a tragedy 70 people including the bride and groom Died at the Scene," reads an Indonesian-language Facebook post uploaded on January 10, 2022.

The post, which was shared in a Facebook group with more than 320,000 members, shows a photo of people standing outdoors on a large red carpet littered with debris. 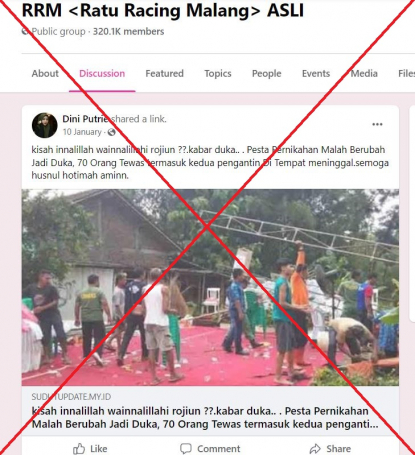 The post links to a blog article, published on the same day and describes the alleged catastrophe.

"A wedding party brimming with happiness suddenly turned into a tragedy after disaster struck," the article partly says.

"As reported by TribunPekanbaru.com, the brick wall that was used to support the large canvas at a wedding party in Longyan, Fujian, China fell down and struck many guests below it."

Tribun Pekanbaru is an Indonesian online media outlet, while Longyan is a prefecture-level city located in China's southeastern province of Fujian. 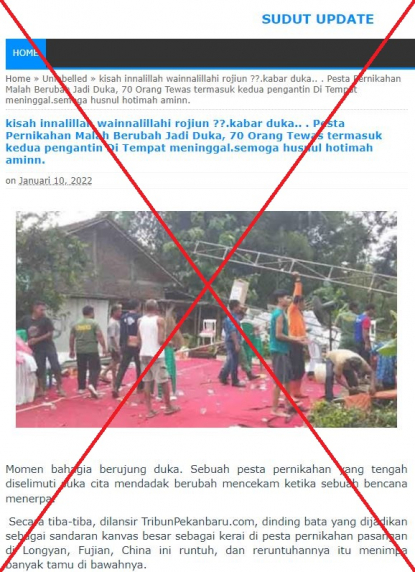 Screenshot of the misleading blog, taken on August 30, 2022

The same photo and blog link circulated alongside a similar claim on Facebook here, here and here, in various Indonesian groups with a total membership more than 322,000 people.

The photo also appeared in Indonesian blog posts here and here two years earlier, linking it to a shooting at a wedding in Nigeria in July 2020, in which 18 people died.

A reverse image search on Google found the photo in an article about a wedding tent and houses destroyed in a storm in Indonesia in March 2019.

According to the report, heavy rains and strong wind wreaked havoc at two villages in Banyumas regency in Indonesia's Central Java province, causing a wedding tent to collapse and damaging several houses -- but nobody was injured.

The photo's caption reads: "Local residents helped fix the tent that collapsed at a wedding party".

The photo is credited to Pikiran Rakyat reporter Eviyanti. 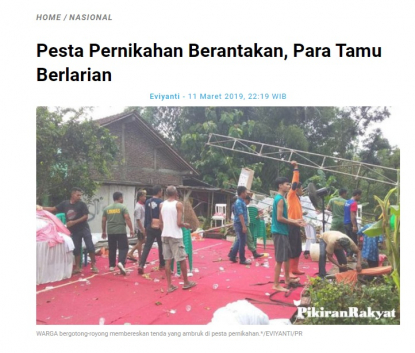 Screenshot of the genuine photo by Pikiran Rakyat

The article quotes local emergency team coordinator Kusworo saying that strong wind caused the wedding tent to collapse and hit guests, although nobody was injured.

At the 32-second mark, the YouTube video shows a man wearing an Indonesian civil servants' uniform.

On June 25, 2021, Tribun Pekanbaru published this report about the deadly wedding tragedy that killed nine people in Longyan, using the photo from Banyumas with a caption that reads: "illustration: a ruined wedding party".

Nine people were killed when a brick wall fell down at a banquet in a village in Shanghang county, Longyan, Fujian, on June 22, 2021, according to reports by Chinese state-owned national media CCTV and local broadcaster Shanghang Radio and TV,

It is unclear if the banquet was for a wedding.

As of September 1, 2022, AFP found no reports of a "deadly wedding accident" in Fujian province this year.

AFP previously debunked a similar false claim about the deadly wedding in Longyan, which used a picture of a collapsed wedding tent in Indonesia's North Sulawesi province.