Social media users are sharing an image that appears to show a Facebook post from Meta CEO Mark Zuckerberg saying the September 11, 2001 terrorist attacks in the US "never happened" on the company's virtual reality platform. But the photo has been digitally altered; in the original post, Zuckerberg promoted the video game "Horizon Worlds" but did not mention 9/11.

"Friendly reminder: 9/11 never happened in here!" says text in an image of the supposed post from Zuckerberg, shared August 18, 2022 on Twitter.

The photo shows an avatar resembling Zuckerberg in front of a digitized version of the two World Trade Center towers that were destroyed in the terrorist attacks. AFP reached out to the Twitter user who shared the image for comment. 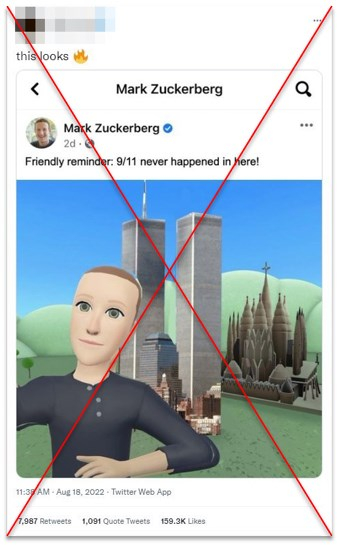 Other posts with the picture have spread across platforms, including Facebook and Instagram -- both of which are owned by Meta -- as well as Twitter and TikTok.

The executive's original post announced the rollout of "Horizon Worlds," Meta's video game for Oculus virtual reality gear, in France and Spain. The accompanying image shows Zuckerberg's avatar posing in front of the Eiffel Tower, not the World Trade Center.

"We're launching Horizon Worlds in France and Spain today!" Zuckerberg said in the post. "Looking forward to seeing people explore and build immersive worlds, and to bringing this to more countries soon."

The original image was also published on Meta's website. A company spokesperson confirmed to AFP that the supposed Zuckerberg post mentioning 9/11 is fake.

AFP has fact-checked other manipulated images here, here and here.