Social media users are sharing an image that appears to show Mehmet Oz, the celebrity doctor running for US Senate in Pennsylvania, kissing former president Donald Trump's star on the Hollywood Walk of Fame. But the image has been digitally manipulated; the original photo shows Oz, known for his television role as "Dr Oz," kneeling to kiss his own star at the landmark.

"Mehmet Oz only cares about one thing, and it ain't Pennsylvania," one Twitter user wrote in an August 21, 2022 post, that generated more than 5,000 retweets and 23,000 likes, and which seems to have fooled many social media users.

Numerous other posts sharing the altered image cropped up across Twitter, a search using CrowdTangle, a social media insights tool, showed. The image also spread on Facebook and in videos uploaded on TikTok.

In reality, the image was deceptively edited to swap in Trump's Hollywood Walk of Fame star in place of the one bearing Oz's name, which was unveiled on February 11, 2022. 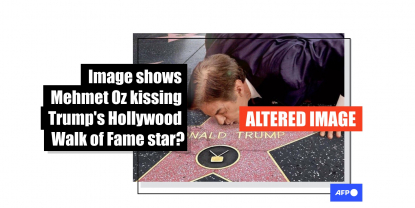 A screenshot of a viral image shared on Twitter, taken on August 21, 2022

"We can confirm that this image is fake," said Rachel Tripp, a spokesperson for Oz's Senate campaign, in an email to AFP.

A reverse image search shows the original, unedited version of the image circulating online was snapped during the ceremony by Associated Press photographer Chris Pizzello. The moment was also captured on video. 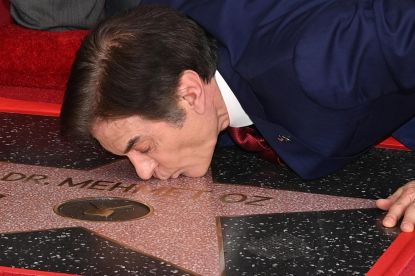 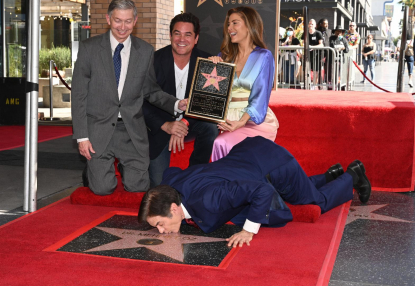 Mehmet Oz receives a star on the Hollywood Walk of Fame in Hollywood, California, on February 11, 2022 ( AFP / Robyn Beck)

Trump, who had his own star in Hollywood dedicated to him in 2007, endorsed Oz in April as the latter was vying to be the Republican Party's nominee for the seat currently held by Senator Pat Toomey, who is retiring.