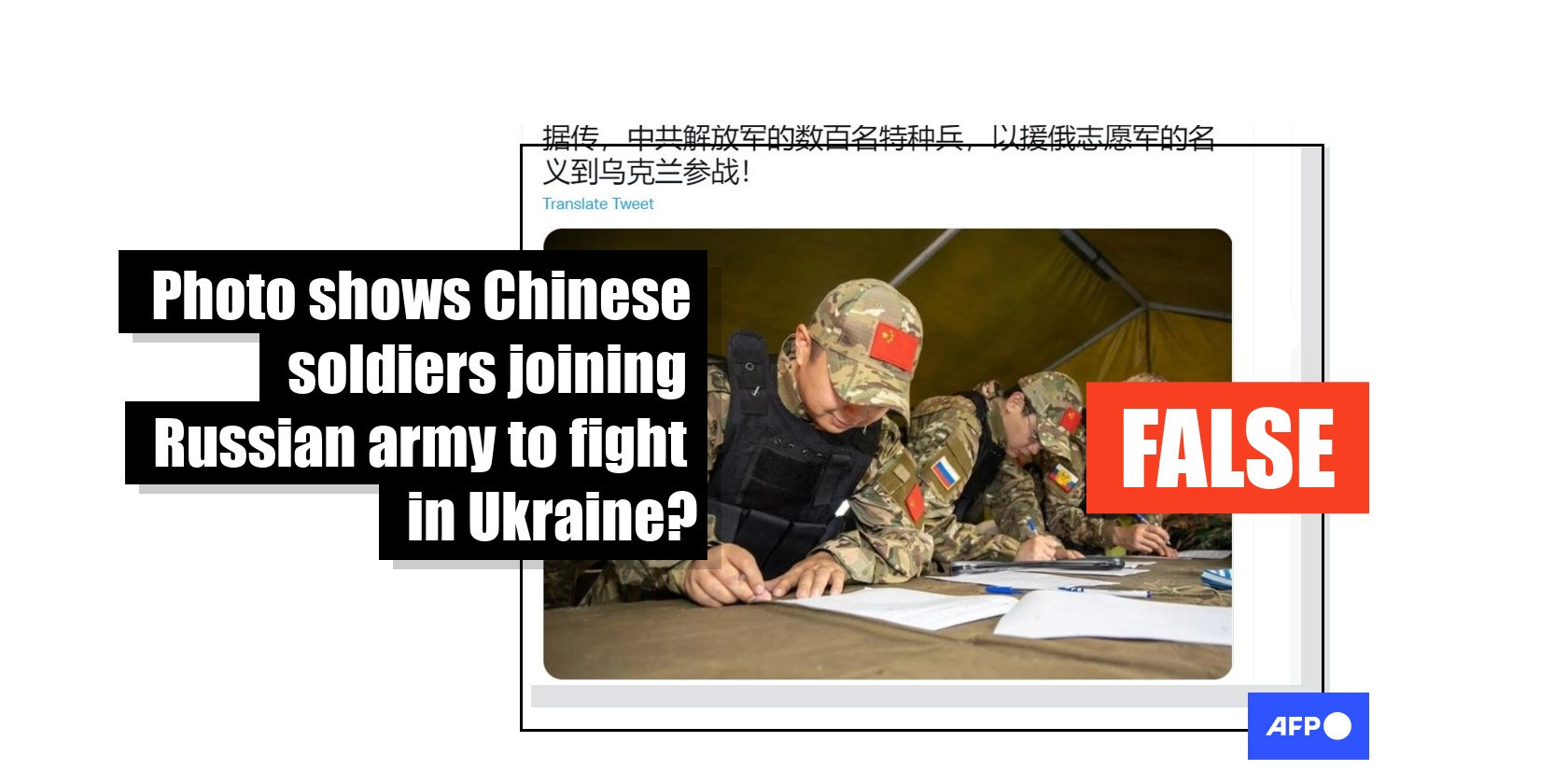 A photo of several people wearing military uniforms with Chinese and Russian flags has been shared hundreds of times in social media posts that claim it shows Chinese soldiers joining the Russian army to fight in Ukraine. This is false. AFP traced the photo to the website of a military-themed amusement park in Russia. The photographer who took pictures of the event said the people in the photo were "tourists".

"It is said that hundreds of special forces of the Chinese People's Liberation Army have gone to Ukraine to fight in the name of the Russian Volunteer Army!" reads this tweet alongside the photo uploaded on July 31, 2022. 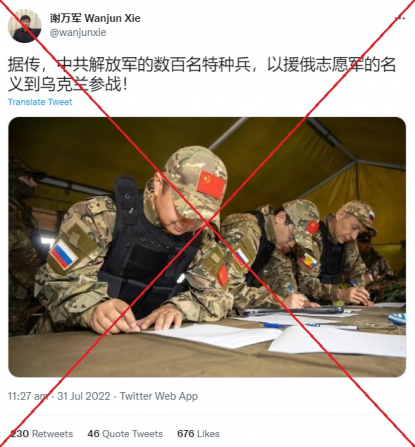 The image has also been shared alongside a similar claim on TikTok and Reddit.

The same image was shared 970 times after it circulated with similar claims in other languages, including in English on Twitter; Polish on Facebook; and Russian on VK, a Russian social media platform.

On August 17, Beijing's defence ministry said that Chinese troops would travel to Russia to take part in joint military drills as part of a bilateral cooperation agreement.

However, the photo in the social media posts has been shared in a false context.

A reverse image search on Yandex found the image was published here on the website of Russian military-themed amusement park "Armeisky Poligon" -- which translates as "Army Polygon" in English.

The amusement park is located south of St Petersburg, in western Russia.

"Our company welcomed very important guests from China. Tourists from friendly countries have long been taken to private army ranges to give them new opportunities and experiences.

"For example, in China, almost everything related to weapons and especially military equipment is forbidden. In Russia, a tourist from China can try almost everything he has dreamed of. Our company has provided such an opportunity at the highest level".

It continues: "Especially for our distinguished guests, we have prepared uniforms and equipment of the Russian special forces. [We] have ordered the Chinese flag and stripes. [We] have developed a safety tech for the event in Chinese. Our training area is one of the most interesting and safe by far. Our distinguished guests were additionally insured before visiting our range."

According to the site's homepage, the amusement park offers "corporate parties, team building and birthdays in military style", and participants can shoot "with real weapons" at events run by instructors who have "real combat experience".

The amusement park also posted the same photo on another page on its website on July 23, 2022 alongside the title: "Organised a one-day tour for a delegation from China."

Below is a screenshot of the photo on the park's website: 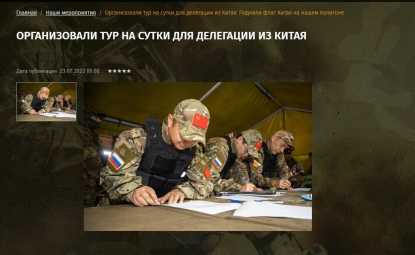 The company uploaded the picture on its VK account a few days later alongside a description that translates as: "ARMEISKY-POLIGON.RF organised a one-day tour for the delegation from China and their Russian partners".

Below is a screenshot comparison of the photo in the misleading posts (left) and the photo on the company's website (right):

In response to the claim alongside the photo in the false posts, an amusement park spokesperson said; "It's all lies."

The spokesperson added the park would not give more information about the Chinese tourists for privacy reasons.

Shortly after being contacted by AFP, the photo and all other photos from the event had been deleted from the company's website and VK account.

A video posted on the company's YouTube channel features the logo "Denisov Production" at the end of the clip.

The channel is run by Pasha Denisov, a video producer based in the St Petersburg region.

His photo was among the July 2022 pictures posted on the company's VK account, as shown in the screenshot below: 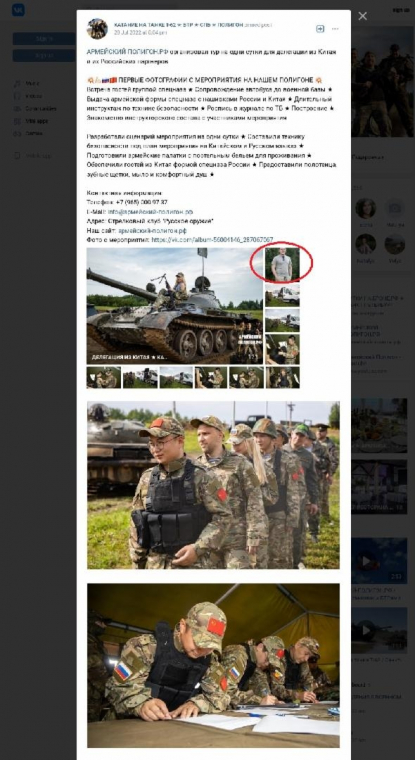 Screenshot taken on August 16, 2022 of an archived version of photos on the company's VK account from the event, with red circle around the photographer added by AFP

When contacted by AFP about the photo, Denisov said: "Yes, I am the photographer and videographer of this event".

He also confirmed that the people in the photo were "tourists", not soldiers.

In the photo shared in the false posts, two people dressed in military fatigues can be seen wearing Russian flags on their right arms and Chinese flags on their caps and left arms.

International law experts say this is not allowed in official military settings.

"The rule is that a soldier who serves in the armed forces of one country should wear emblems of one country only," said Elzbieta Mikos-Skuza, professor at the Faculty of Law and Administration at the University of Warsaw.

According to the Geneva Convention, it is illegal to use the insignia of a state that is not directly involved in the conflict, explained Patrycja Grzebyk, professor at the Faculty of Political Science and International Studies at the University of Warsaw.

Therefore, if Chinese soldiers were with Russian armed forces, they would wear only Russian insignia, she said.

The third man in the photo has a Russian flag on his cap and another Russian flag with a double-headed eagle on his right arm, which is the country's presidential flag.

The Russian army's rules on military uniforms -- detailed by the Russian defence ministry -- dictate that the national flag is usually worn on the left arm, as shown in this image and others at the end of the document.

No images in the document show the presidential flag worn on the military uniform.