A video shared thousands of times on TikTok shows veteran Kenyan politician Raila Odinga recuperating in hospital. The clip resurfaced on August 16, a day after Odinga lost the 2022 presidential election to his main rival William Ruto. But the post is misleading: it fails to provide any context and creates the impression that the footage is recent. In reality, the video dates back to June 2010 when Odinga was treated for a blood clot on his brain.

On August 16, 2022, this TikTok account published a video of Odinga lying in a hospital bed with his wife by his side. 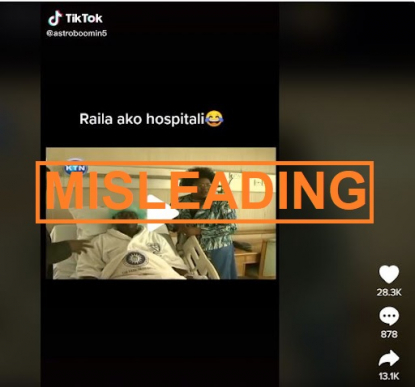 Screenshot of the misleading video, taken on August 17, 2022

The video has been shared more than 13,000 times and drawn 28,000 likes and 900 comments. It has also circulated widely on WhatsApp.

Odinga failed in his fifth bid to become president following elections on August 9, 2022. Results were announced on August 15, 2022.

However, the video does not show Odinga recovering in hospital after Ruto was declared the winner.

The video features a logo of the local television station KTN News Kenya in the left-hand corner. However, the logo is no longer in use and was replaced in 2014.

A keyword search on YouTube for “Raila admitted hospital KTN” led to this video published by KTN News on June 29, 2010.

The report said Odinga was admitted to the hospital after complaining of a headache. He was later diagnosed with a chronic subdural haematoma or blood clot on his brain.

Other videos about his hospitalisation were published here and here.

AFP Fact Check had debunked a similar claim about Odinga's health a month before the elections.

But his spokesman Dennis Onsarigo told AFP Fact Check that the longtime opposition leader was in good spirits.

“He has been holding a series of meetings today, with another one slated for 6 pm,” Onsarigo said on August 17, 2022.

Odinga held a press conference on the same day. It was televised by major Kenyan news channels including Citizen TV Kenya.