A video claiming to uncover rigging in Kenya’s presidential election has been viewed about 200,000 times on TikTok. The clip shows a commissioner reading out the votes from a constituency in Central Kenya. An on-screen tabulation of the figures reveal an error, which the video claims to be an instance of election rigging. This is misleading; the mistake was detected by a journalist and reported to the commissioners, who acknowledged the error and corrected the tally.

On August 14, 2022, this TikTok video shared footage aired by a Kenyan television station showing an official of the Independent Electoral and Boundaries Commission (IEBC) delivering the tallied presidential votes from a constituency in Kiambu county, located in Central Kenya.

The same numbers read out by IEBC official Justus Nyang’aya are displayed in text in the video — evidently revealing a large surplus of votes in the calculations.

“Rigging of the highest order,” the TikTok video concludes. 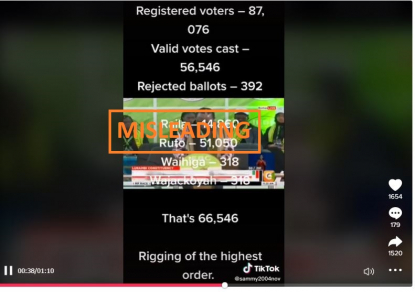 A screenshot of the misleading TikTok video, taken on August 22, 2022 ( Mary KULUNDU)

Nyang’aya is among four IEBC commissioners who rejected the results that saw president-elect William Ruto receive a marginal majority. The dissenting commissioners cited an ‘opaque’ process.

Ruto’s main contender Raila Odinga branded the August 9, 2022, election a “travesty” and followed through this week with a vow to challenge the outcome in court.

But, while the footage of Nyang’aya is genuine, it has been taken out of context.

In a search online, AFP Fact Check located this video tweeted by Citizen TV on August 13, 2022. The tweet includes the same breakdown of votes as those seen in the TikTok video as well as footage of Nyang’aya’s announcement.

According to Nyang’aya's announcement, Ruto and Odinga garnered 51,050 and 14,860 votes respectively while the two other presidential candidates both received 318 votes.

However, the IEBC corrected the figures the same day. After the correction, Ruto’s votes totalled 41,050.

According to media reports, the anomaly was brought to the attention of the electoral body by a journalist.

"There was an error … which was corrected …Thank you journalists for bringing this to my attention," Nyang'aya was quoted as saying.

On August 22, 2022, Odinga’s lawyer filed a petition with the Supreme Court, asking it to nullify the vote's outcome. The court has 14 days to issue a ruling.

Since 2002, every presidential election in Kenya has triggered a dispute.

Odinga also approached the Supreme Court in August 2017 when President Uhuru Kenyatta was re-elected. The court annulled the election and ordered a re-run which Odinga boycotted.

In 2013, Odinga also challenged Kenyatta's win but the court upheld his victory.