Social media posts claim CBC published an article announcing that Justin Trudeau's youngest son came out as transgender. This is false; the story does not appear on the Canadian public broadcaster's website, and the outlet confirmed to AFP that it did not publish the piece.

"Justin Trudeau's youngest son Hadrien has come out as trans, will now go by Hannah," says the headline in an image of an apparent CBC article shared August 9, 2022 on Facebook. 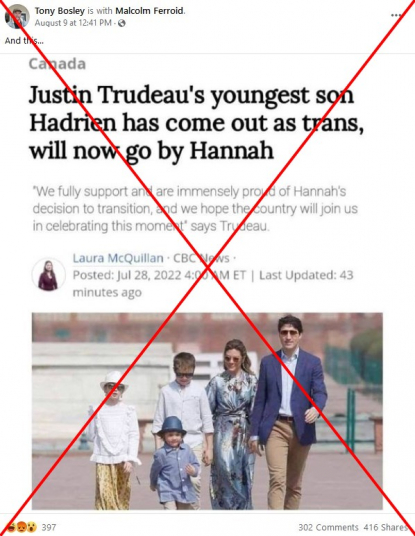 The supposed story includes a photo of Trudeau walking with his wife Sophie Grégoire Trudeau and their children. The post does not include a link to an article.

A search for the headline on the CBC's website did not produce any results -- nor does it appear in an archived version captured shortly after the article was supposedly published July 28, 2022.

Text under the headline shown in the post quotes Trudeau saying: "We fully support and are immensely proud of Hannah's decision to transition, and we hope the country will join us in celebrating this moment."

However, AFP could find no record of the prime minister making any such public announcement. And CBC said the image does not show an authentic article.

"We can confirm that CBC did not publish this article," spokeswoman Kerry Kelly told AFP. "We are aware of a number of recently posted images of fake stories attributed to CBC News and are working with social media providers to flag and remove these false and inflammatory manipulated images."

AFP has previously debunked other fabricated CBC articles, as well as images made to look like genuine stories from Canadian media outlets.