A post in Ethiopia shared more than a thousand times claims that a university whizzkid who secured a US scholarship to complete his doctorate has “invented” a new maths formula available as a mobile app. But although the student, Raji Ashenafi Mamade, exists, the claim was shared by a hoax account impersonating the bright scholar. Ashenafi has denied creating a theorem or app and said he has reported the imposter page to Facebook. The fake post contains a link that leads to a popular maths app on the Google Play Store.

Written in Afaan Oromo, the caption translates to: “Thanks to God, I have invented a new Math formula together with an application.  For the application to be authorised by Google, it must be downloaded 10,000 times. Please click on the link and download the application immediately. Those who can’t download please share it within your circles for 10 days (sic).” 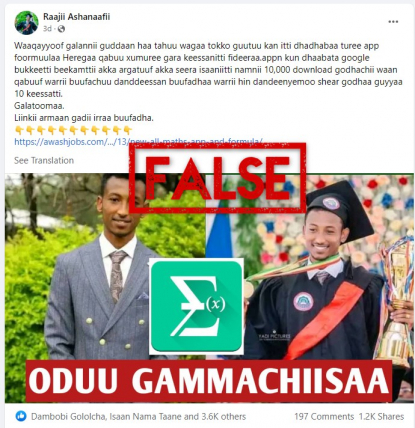 The post was published on a Facebook account impersonating Ashenafi, who graduated from Adama Science and Technology University in 2022 with a dual maths and physics degree after scoring straight A’s in all 60 of his courses. One of the two images of Ahenafi featured in the post shows him on his graduation day.

A link in the post leads to a website called AwashJobs.com and a promotional article titled: “New all maths app and formula”.

AFP Fact Check clicked on the download button at the end of the article and was taken to the installation page for an application on Google Play called “All Math formula”.

The app offers “1,000+ math formula and more to come (sic)” and has more than a million downloads. Developed by Touchfield, it is one of several mathematics-style apps built by the Indian company for Android devices.

The claim linking Ashenafi to the app, however, is false.

Ashenafi told AFP Fact Check that the story about him inventing an application and a new maths formula is false.

“I have not created any app or discovered a new maths formula. Besides, the account sharing the post doesn’t belong to me,” Ashenafi said in an email.

He added that he reported the imposter account to Meta, Facebook’s mother company.

The page was created under the name “Raajii Ashanaafii” on July 5, 2022. Many of the posts are identical or similar to the one we debunked and contain the same link to Google Play.

Ashenafi shared his official Facebook account with AFP Fact Check. He also confirmed he would be attending MIT on a scholarship next autumn to study for a PhD.

AFP Fact Check reached out to MIT and Touchfield for comments but they are yet to respond.