An alleged Time cover has been shared on social media showing Kenyan veteran politician Raila Odinga alongside the caption "The man who will never be president”. The picture emerged after he lost the presidential race against key rival William Ruto this week. But the photo is fake: the US publication confirmed the cover page was fabricated. The magazine's archives show Odinga has never been featured on its cover. AFP Fact Check found the image was shared by a former aide who fell out with Odinga.

Miguna Miguna, who worked for Odinga from 2009 to 2011 when he was PM, shared the post on his Facebook account a day after Ruto was declared the country’s president-elect on August 16, 2022.

“The conman has made history,” his caption reads. “Made it to the PRESTIGIOUS Times cover as the LONGEST presidential loser (sic).” 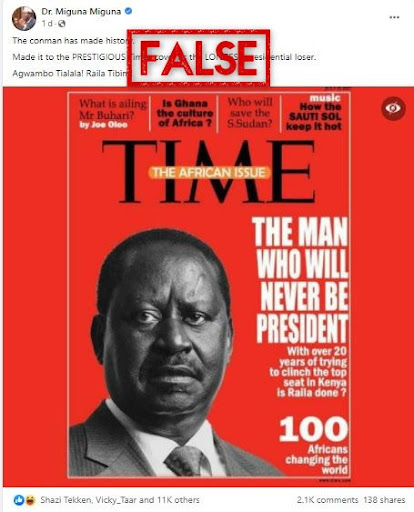 Other purported articles about Africa are displayed above the “Time” masthead.

Miguna, a Canadian-based lawyer with dual Kenyan citizenship, repeated the claim on Twitter where it gained more than 1,000 retweets and over 5,000 likes.

He and Odinga fell out about a decade ago. After the bitter row, Miguna published books criticising his former boss (see here and here), who declined to talk about the soured relationship at the time.

Nonetheless, Miguna was among those on stage when Odinga was sworn in as the “people’s president” after the bungled 2017 election, which was ultimately overturned by a court in favour of President Uhuru Kenyatta.

In 2018, Miguna was deported to Canada by Kenyatta’s government after participating in a mock inauguration of Odinga.

But the claims shared on social media by Miguna are false.

A keyword search on Time’s website yielded no matching edition.

The publication date in the top right corner, although blurry, reads July 19, 2017. The magazine’s archive of publications from that year showed that Time did not publish on that date.

Odinga has never featured on the cover of any edition of the magazine.

Time has also dismissed the cover circulating on social media.

“This image is not an authentic Time cover,” the company told AFP Fact Check in an email.

The magazine offers tips to readers for spotting hoaxes. Applying these to the “Odinga” cover, it is evident the font and typography are different from what is currently in use.

A screenshot of Time’s current style with no rooflines, taken on August 17, 2022 ( Mary KULUNDU)

“No longer do we feature ‘rooflines’ above the logo that point readers to stories inside,” reads a disclaimer from Time magazine, which means the “Africa” skyboxes on the Odinga cover are also fabricated. 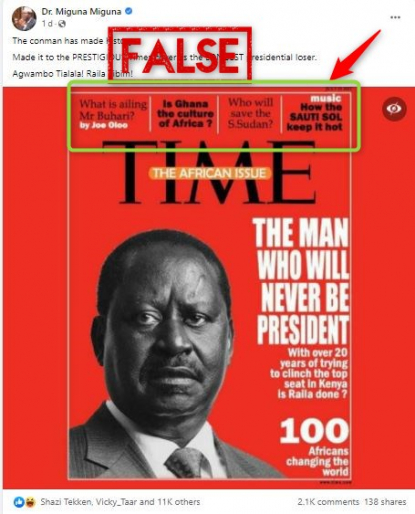 A screenshot showing the rooflines on the fabricated Time cover, taken on August 17, 2022

Odinga has branded the outcome of the August 9 election a “travesty” and vowed to pursue “all constitutional and legal options”.

He narrowly lost his fifth leadership bid by about 230,000 votes despite the support of his old foe, Kenyatta, and the weight of the ruling party machinery behind him.

His supporters cried foul over the outcome, which also triggered divisions in the Independent Electoral and Boundaries Commission.

Odinga has previously said he was cheated of victory in the 2007, 2013 and 2017 elections, and the poll’s aftermath is being keenly watched as a test of Kenya’s democratic maturity.

No presidential poll outcome has gone uncontested in Kenya since 2002, and the disputes have led to bloodshed in the past.