The governor of Nigeria’s Kwara state, Abdulrahman Abdulrazaq, is seeking a second term with the backing of the ruling All Progressives Congress (APC), as Africa’s most populous nation gears up for elections in early 2023. Social media accounts have shared a video with more than 300,000 views claiming part of it shows Abdulrazaq being booed by young people at a rally. This is misleading: the footage in question was filmed in December 2018 when Abdulrazaq was still running for office.

The 12-minute video was shared in this Facebook post and comprises several visual elements, including footage from a political rally as well voiceovers from two narrators. One of the clips shows Abdulrazaq surrounded by a crowd of people who chant and boo as he is being led away from a podium.

Another clip in the video features the Labour Party’s Peter Obi, who is among the candidates bidding to succeed President Muhammadu Buhari next year. 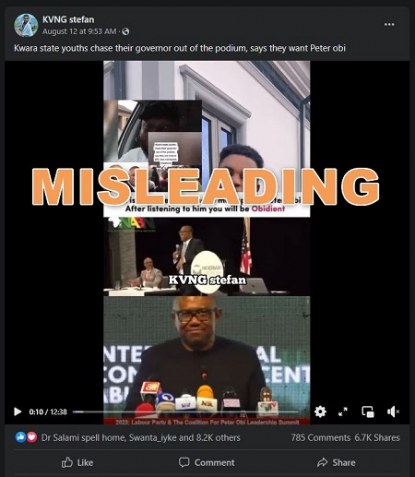 “Kwara State youths chase their governor out of the podium, says they want Peter Obi (sic),” reads the caption of the post published on August 12, 2022.

In one of the video’s voiceovers, a narrator speaking in Nigerian Pidgin is heard saying: “The youths said they want to hear anything concerning APC. They chased him away and chanted Obi’s name.”

A few days earlier on August 9, 2022, a TikTok account called “Saint_T_Comedy” published the clip of Abdulrazaq being heckled at a rally. The caption in the now-deleted TikTok video claimed Abdulrazaq was called a “thief” and added that “finally youths have woken up”. 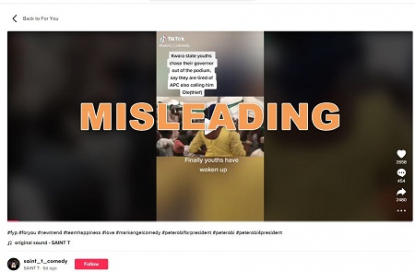 A screenshot of the misleading TikTok post, taken on August 15, 2022

The same claims were also published elsewhere on Facebook, including here and here.

Using the InVID-WeVerify video verification tool, AFP Fact Check conducted reverse image searches on keyframes from the footage and found the clip was published on YouTube on December 25, 2018.

According to the caption, the video was taken at the venue of the 53rd annual Ilorin Emirate Progressive Descendant Union (IEPDU) conference in Ilorin, Kwara’s capital city.

It explained that Abdulrazaq was booed by supporters of Bukola Saraki, a Nigerian senate president who was the state governor between 2003 and 2011.

At the time of the footage, Abdulrazaq was the APC’s gubernatorial candidate in the 2019 governorship election. He won the ballot and was sworn in on May 29, 2019.

AFP Fact Check traced Nigerian media reports about the rally. The Guardian newspaper said Abdulrazaq was booed when he was about to pledge a donation at the conference. The chaos that ensued caused the event to end abruptly.

The Kwara state government has also dismissed the clip as old.

“Those who trended the video desperately meant to send the signal that an incumbent governor was being booed,” spokesman Bashir Adigun said in a Facebook post on August 9, 2022.

The clip resurfaced as election fever ramps up in Nigeria ahead of general elections scheduled for the first quarter of 2023.

In February, voters will choose Buhari’s successor after eight years of his rule.

Elections for state lawmakers and governors in the majority of the 36 states will be held on March 11, 2023.

The three main presidential contenders are veteran political operator Bola Tinubu of the APC, former vice president Atiku Abubakar of the opposition Peoples Democratic Party and Obi, who was Abubakar’s running mate in the 2019 election.