With petrol prices reaching record highs in South Africa, social media users have been sharing promotional videos for so-called “eco tablets”. Shaped like a pill, these products are sold online by agents who claim they improve a vehicle’s fuel consumption when added to a fuel tank. However, energy experts caution against their use, warning these and similar additives could damage an engine in the long run and void a car’s warranty.

Two different videos published on TikTok here and here are among those marketing the pills in South Africa on social media.

In the first clip, a woman points the camera at her dashboard to show that she has 80 kilometres of fuel remaining. She then drops an orange tablet into the tank and proceeds to list a range of purported benefits as a pump attendant fills up her car.

The footage runs for 90 seconds and is presented like a tutorial.

The second video, in response to the first one, shows a man talking through the process as he puts half a tablet into his tank, explaining that he intends to fill it halfway. 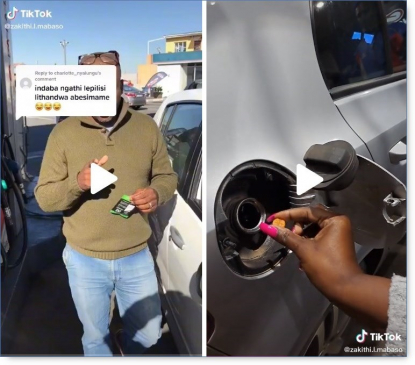 A screenshot of the viral fuel tablet videos on TikTok

The videos coincided with soaring fuel prices in South Africa, which reached a record high of R26.74 ($2) a litre in July — about 55 percent more than what US consumers pay at the pumps. South Africa's official but arguably understated unemployment rate is 34.5 percent — equal to nearly eight million people.

However, experts say fuel tablets are not the cost-savers they are proclaimed to be.

Products like the “B-Eco” capsule are not new; fuel technologists were already advising against the use of similar products in 2008.

B-Eco tablets are made by B-Epic, a “health and wellness” supplements company that claims their fuel additives “provide a more complete combustion of the fuel poured into the tank”.

The claimed result? Fuel combustion of “95-97 percent instead of the usual 75-80 percent”.

B-Epic promotes the fuel tablets and other products on social media and in its online store. Part of the company’s marketing strategy includes the sharing of video testimonials and info sheets on Facebook and TikTok, where they generate thousands of views and shares. 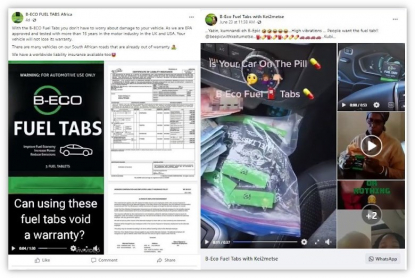 All four reviews of the fuel tabs on Takealot are glowing. 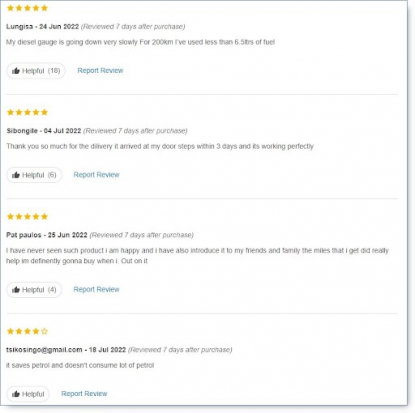 One woman who says she works as an agent reselling the tabs testifies in a series of Facebook video posts about how her wealth is derived from B-Epic.

Speaking about the fuel tab, the same woman claims that “one pill caters for 60 - 80 litres”. She reiterates that it dissolves well and won’t damage a car’s engine. 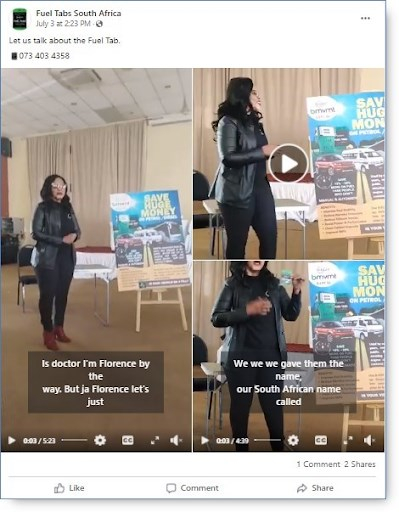 Others marketing the fuel tab claim that “it has been shown to improve fuel consumption by up to 15 percent”.

Based on these two sets of claims and July’s fuel price of R26.74/litre, AFP Fact Check calculated an overall saving of between R140 and R220 per tablet per tank of fuel, less after taking into account August’s fuel price cut.

Not so, say the experts.

The Sasol Fuels Application Centre, a fuels research and development facility in Cape Town, told AFP Fact Check the claims had no scientific basis at all.

Although the centre hasn’t tested the B-Epic fuel tablet, they have done so with other similar brands.

As fuel tablets do "not contain any energy content, it is scientifically impossible to achieve a 15-percent improvement in fuel consumption,” said Adrian Velaers, senior mechanical engineer at Sasol.

According to Velaers, the pills “simply do not have any effect”.

“The petrol or diesel you purchase at the pump contains a certain energy content, and modern engines are effective in releasing all of this in the combustion process. Without adding more energy content, you cannot improve fuel consumption significantly,” he said.

He noted that small benefits could be gained from additives that clean injectors or valves, or those that reduce friction — none of which the fuel tabs claim to do.

“Even with such additives, this would result in a fuel consumption benefit of no more than three percent. Most branded fuels already have such additives included, so adding further additives, even good ones, would make no further difference,” said Velaers.

He told AFP Fact Check that there is no room for additional combustion as claimed.

“This is all false and these companies are basically stealing people’s money with a lie,” Louw said.

Louw conducted tests with Sasol in 2016 when they compared four different fuel-saving products in a controlled environment. “Nothing has changed since then,” he said.

The four products were an additive, a fuel magnet, a field molecule enhancer and an airflow modifier.

In its May 2016 issue, CAR reported on the tests. “It’s clear from the conclusive, scientific results, which fall within the 1% experimental-tolerance band,” the magazine wrote, “that there are no benefits to these devices. Don’t waste your money or risk damaging your engine.”

A screenshot of the test results of four different fuel-saving products, published by CAR magazine in May 2016

Louw added that such tests can only be carried out in a controlled environment because of a placebo effect that comes from drivers “inadvertently adapting their driving style to be more fuel-efficient”.

A screenshot from a 2016 CAR magazine report

The drawbacks of using fuel pills, Velaers said, are that motorists introduce a solid item of unknown content into their fuel tanks.

“It may block filters, damage the fuel gauge or release chemicals which could cause engine damage.”

Again, Louw agreed. “Fuel is a fine balance of many properties — adding chemicals upsets this balance and can have many negative results.”

Some companies abroad that developed similar fuel pills were forced to halt research, according to Eugene Herbert, CEO of MasterDrive, a driver training organisation based in South Africa.

“This is because the pills contained a substance called naphthalene which can marginally reduce consumption and emissions in certain circumstances but which also causes a build-up of carbon deposits that later result in poor performance,” Herbert wrote in a road safety article published on July 4, 2022.

Furthermore, fuel tablets are not usually approved by car manufacturers, nor are they covered by the vehicle warranty, which in some cases could be voided.

Major insurer OUTsurance told AFP Fact Check that it has not had claims related to fuel tablets.

“Whilst we reference foreign matter in fuel as an exclusion under our Motor Warranty cover, all claim outcomes will be determined individually,” spokeswoman Natasha Kawulesar said.

A screenshot of the clause on OUTsurance’s motor warranty, taken on July 13, 2022

Velaers suggested some proven methods based on driving behaviour that motorists could use to help “significantly” save fuel:

- Accelerate gently, and coast to a stop instead of braking hard
- Maintain momentum and input as little energy as possible in your driving style
- Minimise aircon use, close windows and remove any unnecessary weight from the vehicle
- Check tyre pressures and make sure your vehicle is well maintained
- Use quality guaranteed fuels
- Use 93 octane petrol if your vehicle is compatible with it

“There are unfortunately no miracles,” said Velaers.

A screenshot of advice from a 2016 CAR magazine report