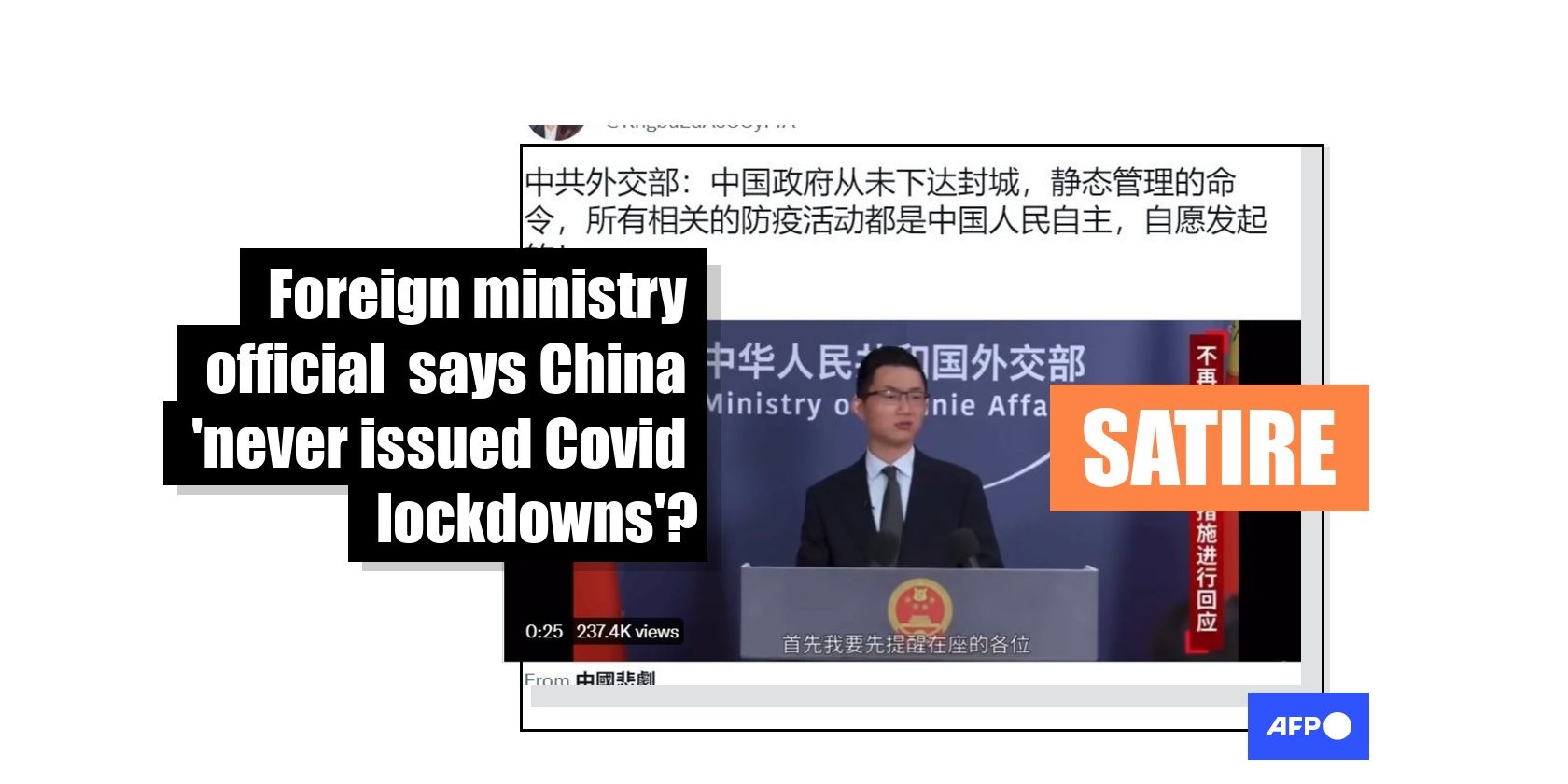 A satirical video viewed hundreds of thousands of times online appears to show an official for China's foreign ministry saying strict pandemic lockdowns in the country were "initiated" by the Chinese people and not imposed by the government. Some social media users, however, appeared to believe the video shows a genuine government announcement. The video actually originated on a Taiwanese media channel that regularly publishes political satire about China.

The video was viewed more than 230,000 times after it was shared on Twitter on August 15.

Its simplified Chinese caption translates as: "Ministry of Foreign Affairs of the Chinese Communist Party: The Chinese government has never issued an order of lockdown or silent management.

"All relevant epidemic prevention activities are initiated by the Chinese people independently and voluntarily!"

In China, authorities use the term "silent management" to refer to partial lockdowns in certain areas.

The 30-second video shows what appears to be a live broadcast of a foreign ministry press conference titled: "No longer responding to [questions about lockdown] measures".

A person speaking in Mandarin says: "First of all, I would like to remind everyone here that today's foreign ministry press conference will not take any questions about lockdowns, silent management, or relatively static management [of the virus].

"Because China has made it clear multiple times that Chinese government has never issued lockdown orders. All relevant epidemic prevention activities are initiated by the Chinese people voluntarily. Further discussion here is a waste of time." 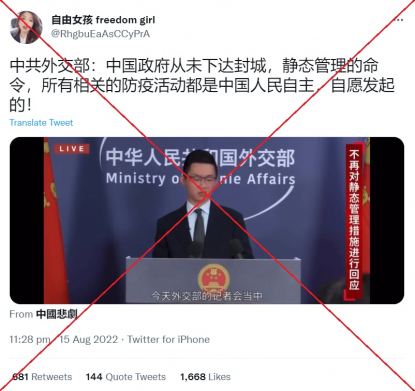 China is the only major economy still holding fast to a zero-Covid strategy, stunting local tourism during peak travel seasons.

The strategy involves snap lockdowns and quarantines, sometimes over just a handful of cases, and the measures have sparked anxiety and anger in some cities.

"Voluntarily?! [He is] shamelessly lying!" another commented.

A social media user, however, wrote in a comment on one of the posts that the video was taken from Taiwanese satire media channel Eye Central Television.

The channel's Facebook page states it "satirises current events with illusion" and "hopes to arouse the audience's reflection through nonsense and bring warmth, happiness and strength to the global society".

A keyword search on its YouTube channel found a longer version of the video dated August 10.

The video in the misleading posts can be seen from the YouTube video's 51-second mark.

Below are two screenshot comparisons of the video shared in the online posts (left) and the YouTube video (right): 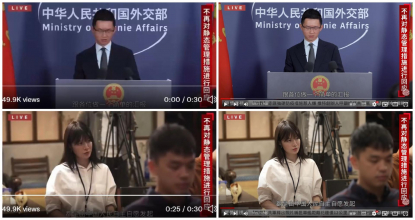 The actor who plays the role of the foreign ministry official also appears at the beginning of the video as the host. He identifies himself as "Retina".

Retina -- whose real name is Chen Tzu-chien -- is the co-founder and host of Eye Central Television.

The channel has previously published satirical videos imitating press conferences by the Chinese foreign ministry, including here and here.