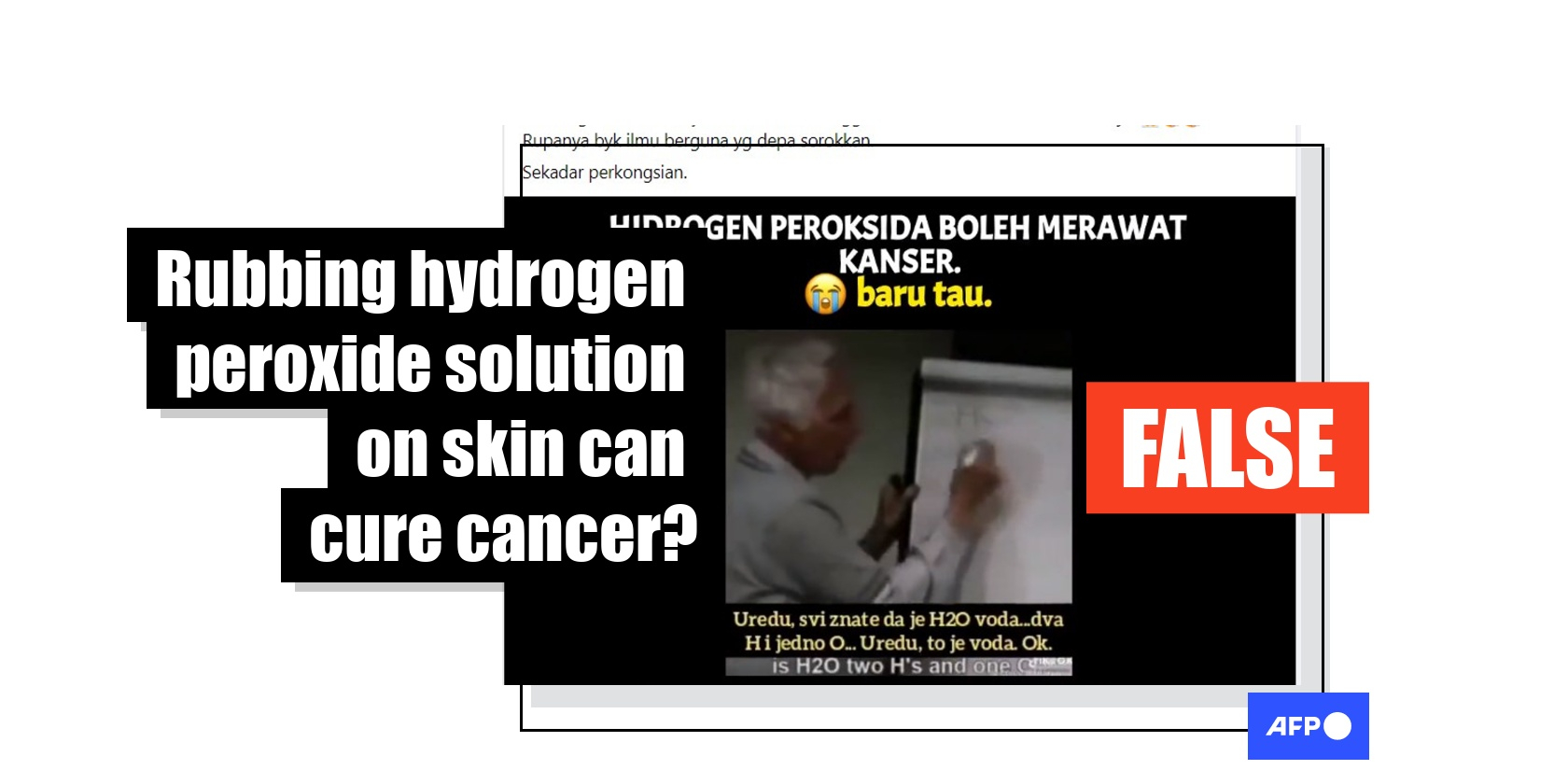 A video viewed millions of times in posts on Facebook, TikTok and Telegram claims that rubbing hydrogen peroxide solution on your skin can treat cancer. The posts circulated online in various languages, from English to Malaysian and Croatian. Medical experts and cancer organisations say there is no evidence to support the claim and warn that rubbing hydrogen peroxide on one's skin can cause irritation, blisters or burns.

The one-minute, 56-second video was shared on Facebook here by a Malaysia-based user on June 29, 2022.

"Hydrogen peroxide can treat cancer," reads the Malaysian-language text superimposed on the video.

The post's Malaysian-language caption translates to English in part as: "Hydrogen peroxide can treat cancer. Just by rubbing one or two times per day on the surface of the skin." 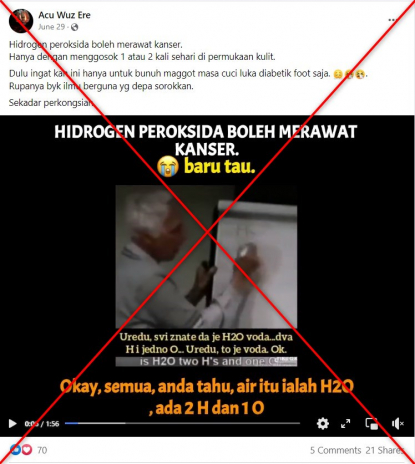 The video was shared alongside a similar claim in Malaysia on messaging app Telegram here, here and here, where it has garnered more than 4,900 views.

The footage has been watched more than 6.5 million times after it circulated with a similar claim in English on TikTok and in Croatian on Facebook.

The video in the misleading posts is a segment of a nearly three-hour-long lecture that Charlotte Gerson, daughter of German-born American physician Max Gerson, gave at the College of Naturopathic Medicine in London in 2003 .

In the 1920s, Max Gerson developed what he called “Gerson Therapy” -- a controversial treatment for cancer and other diseases. Scientists have found no evidence that the treatment works, as stated here and here.

The video shared on Facebook starts from the two-hour, 41-minute and 46-second mark of the longer footage.

Not a proven cancer treatment

Hydrogen peroxide (H2O2) is a chemical light blue substance, colourless in a diluted form, with a slightly sharp odor.

“Although low concentrations of hydrogen peroxide can be used to disinfect skin, there is no role for its use in treating cancer. In fact, high levels of hydrogen peroxide on the skin can cause burning or blistering, and ingesting it can be even more dangerous," said Dr Jyoti Patel, Chicago-based oncologist and editor-in-chief of the Cancer.net website.

"Some studies have even shown that hydrogen peroxide could enable cancer to flourish," Patel told AFP.

For example, this study explains that "several independent lines of evidence" suggest that the hydrogen peroxide produced by certain cells may function as the "fertiliser" in the facilitation of tumor growth and metastasis, by driving accelerated aging, DNA damage, inflammation and cancer metabolism.

Elise Bonvin, a molecular biology and oncology researcher in Brussels, also told AFP that "although H2O2 has been used for keratose (not cancer), it is not proven by the scientific [evidence] to my knowledge that H2O2 could be a therapy for cancer."

The US National Cancer Institute (NCI), a leading US agency for cancer research, said that it also found no evidence for the claim.

"It does not appear from a search of our resources that the NCI maintains any information supporting this claim," its spokesperson told AFP.

Dermatologists told AFP that rubbing hydrogen peroxide on a person's skin could be harmful.

"That claim is false. Hydrogen peroxide is not a cure for cancer tissue. It can actually inhibit wound healing and destroy healthy cells. In dermatology, we do not even recommend it for wound care," said Dr Lauren Ploch, a US-based dermatologist and member of the American Academy of Dermatology Association.

Asked what might be the consequences if hydrogen peroxide was rubbed on the skin regularly, Dr Ploch told AFP: "It depends on the concentration of the hydrogen peroxide. Regular use can cause skin irritation, skin shedding, blisters, and/or burns."

Dr Lidija Kandolf-Sekulovic, a specialist in dermatology and subspecialist of oncology in Belgrade, told AFP that there is a small ongoing study that researches if a high concentration of hydrogen peroxide of 30 percent could have a positive impact on basal cell carcinoma, a certain type of skin cancer.

But, she said, "it will be conducted only in 2023 and on a small number of patients to see whether there is any efficiency in this solution at all."

The trial was recruiting participants and is expected to end phase two by March 2023, she said.

The claim has also been debunked by UK-based charity Full Fact and American newspaper USA Today after it was shared in English-language posts in January 2022.