Nigeria’s opposition Labour Party tweeted a set of images of large crowds as proof that the “one million march” for its presidential candidate Peter Obi in the country’s northern Nasarawa state drew huge support. While the majority of the images show the event, two were taken at a political rally in Kenya days before the country held elections on August 9, 2022.

“More pictures from One Million Man March For Peter Obi in Lafia, Nasarawa State,” reads a tweet by Nigeria’s Labour Party. “It was a massive Success. Now it is obvious that Obidient is beyond online structure.” Obi is a two-term ex-governor of Nigeria’s southern Anambra state who is bidding to succeed President Muhammadu Buhari next year as leader of the Labour Party.

The tweet was published on August 6, 2022, the same day Obi’s supporters, who identify themselves as “Obidient”, gathered in Nasarawa’s capital Lafia. The “one million march” for Obi was held several weeks ahead of the official campaign season, according to the Nigerian electoral commission’s schedule.

The tweet features various images, all of them purportedly showing supporters who attended Obi’s rally.

Some of the images were circulated in different combinations on Facebook (here and here) together with the same claim.

But, while people indeed gathered in Lafia for Obi, two of the images showing enormous crowds – taken from above and from slightly different angles – are unrelated to his march.

Ruto himself shared similar overhead images from the same event.

Using Google Maps, AFP Fact Check geolocated the exact spot the images were taken — at the intersection of Kenyatta Avenue and Pandit Nehru Road in Nakuru.

Matching landmarks such as the buildings of Avenue Suites Hotel and Shoppers Paradise as well as electricity poles and cables visible in the Kenyan politicians’ tweets can also be seen on the map. 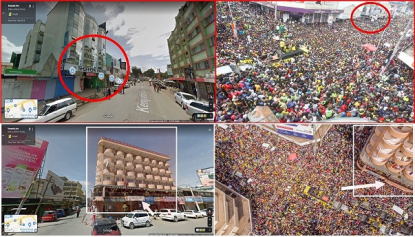 Meanwhile, AFP Fact Check confirmed that the remaining images tweeted by the Labour Party were indeed taken in Nigeria at the College of Agriculture, Lafia, at a historical landmark called City Gate, which was a meeting point for the "one million march".

Screenshot of a City Gate picture on Google Maps

A Google Maps Street View was not available for the location but AFP Fact Check found a Google photo of the city gate. The design, colour and other features in the photo match those in the remaining images tweeted by the Labour Party.