As counting was underway in Kenya’s presidential election, a video clip surfaced online claiming to show the country’s electoral body declaring victory for William Ruto, one of the two key contenders. However, the claim is false; the footage dates back to the 2017 election, and it has been manipulated to replace the audio. As of Thursday, Kenya was still tallying votes, with an official result expected no later than August 16.

On August 11, 2022, this Facebook post shared a video of Wafula Chebukati, the chairman of Kenya’s Independent Electoral and Boundaries Commission (IEBC), supposedly announcing Ruto as the president-elect.

Ruto, 55, is among four candidates contesting to be the country’s fifth president. According to the provisional results aired by local media, he is neck and neck with his main rival and veteran politician Raila Odinga. 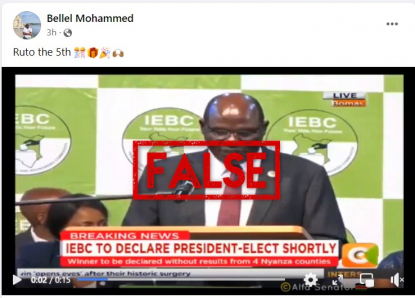 The same video was shared several dozen times on TikTok (see here, here and here), as well as in WhatsApp groups.

But the video is old and its audio has been manipulated.

A close look at the footage reveals that the audio is out of sync with the visuals.

Suspecting that this video may have been filmed during previous elections, AFP Fact Check searched for the keywords “Uhuru Kenyatta re-elected” and “IECB”.

The results revealed a video that was published five years ago, in October 2017, by South Africa’s national broadcaster SABC. At the time, Chebukati was officially announcing President Uhuru Kenyatta’s reelection after a repeat presidential election.

Kenya’s 2017 presidential polls, in which Kenyatta and Odinga were the main contenders, ended up in a court battle. Odinga won the case and the court ordered a repeat poll, which Kenyatta won.

However, in the video clip circulating on social media, this audio sequence has been replaced by a voice making the following claim: “Just let me say that again I hereby declare Mr William Samoei Ruto as president-elect”.

On August 9, Kenyans voted in six elections, choosing a new president as well as senators, governors, lawmakers, women representatives and about 1,500 county officials in polls that were largely peaceful. Votes are still being tallied.

International observers have warned about the circulation of misleading information following the polls (see here).