Footage appearing to show dead fish that have washed up on a beach has been viewed hundreds of thousands of times on social media alongside the misleading claim it was filmed after China staged military drills around Taiwan in August 2022. The video, however, has previously circulated online since at least November 2021, when there were multiple Chinese-language reports about dead fish washing up on a beach in China's Huizhou city.

A person can be heard off camera saying in Mandarin: "The beach is full of dead fish. My goodness."

The caption includes the hashtags "Pelosi", "Visit Taiwan" and "Prepare for War".

Beijing has raged at a trip to Taiwan in August by US House Speaker Nancy Pelosi -- the highest-ranking elected American official to visit in decades -- staging days of air and sea drills around the island that raised tensions to their highest level in years. 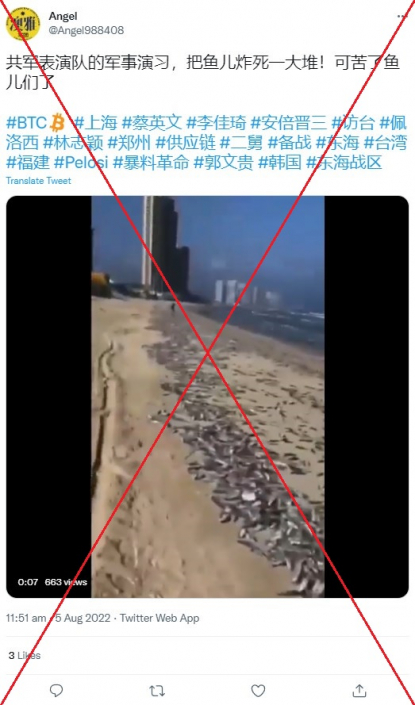 The video was viewed more than 200,000 times alongside a similar claim in social media posts in Chinese here and here, English here and Spanish here.

Comments on the posts suggest many online users believed the video was filmed recently.

"Pelosi didn't kill the fish, but these fish died because of Pelosi," said another.

However, the video predates Pelosi's visit to Taiwan by at least eight months.

Keyword searches found the video was earlier published on YouTube on November 9, 2021.

The YouTube video is captioned: "On November 6, a large number of dead fish were found on the beach of Double Moon Bay in Huizhou, Guangdong.

"The videos show that a large number of dead fish were washed up to the beach, looking shining white from the distance."

Double Moon Bay is located in the southeast part of Huizhou city in China's Guangdong province.

Below are screenshot comparisons of the video in the misleading posts (left) and the YouTube video (right): 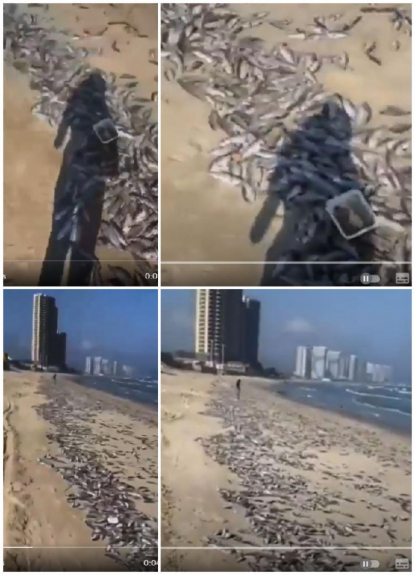 Below are two comparisons of the video in the misleading posts (left) and the clip from Beijing News (right) showing the same buildings and two people on the beach: 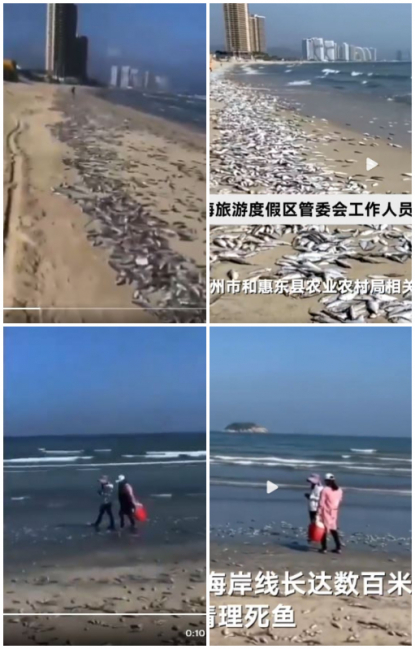 The Beijing News report stated the cause of the incident was unclear.

It translates in part: "Beijing News learned from the management committee of the Port Coastal Tourism Resort that the relevant departments of the local Agricultural and Rural Affairs Bureau have sampled the dead fish and seawater, and the test results have not yet been released."

Both reports also stated it was unclear what caused the large number of fish to die.